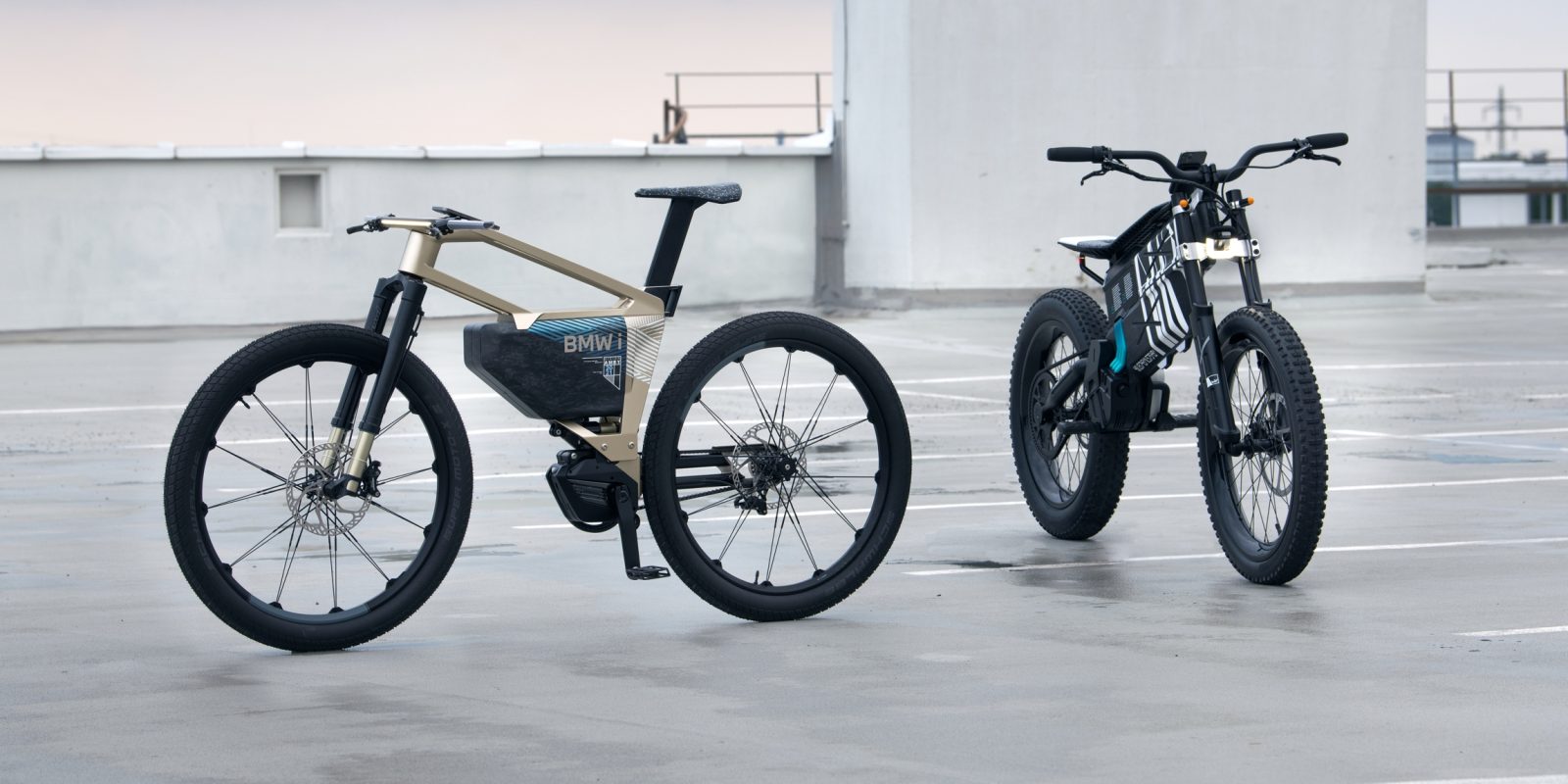 Electric bicycles have positively exploded in popularity this year. You don’t have to take our word for it – you can see that e-bike sales numbers are off the charts.

Consumer interest in electric bikes continues to grow, and more riders are pounding the pavement and the dirt than ever before. Electrek alone brought in tens of millions of views for e-bike news stories this year, further demonstrating how much fascination there is in the industry. Now we’re looking back on the biggest electric bike news stories of the year.

When BMW unveiled its i Vision AMBY electric bicycle, it did so fully knowing that the fast e-bike didn’t fit within any current legal definitions of an electric bike.

The powerful motor gave it a top speed of up to 60 km/h (37 mph), which far exceeds the typical legal e-bike limits in nearly every country in North America, Europe, Asia, and Oceania.

The top speed was technically modifiable via a smartphone app, allowing it to be dropped to anywhere from 25-45 km/h (15-28 mph) to fit various local speed regulations. BMW even floated the idea of having the speed limit be adjustable in real-time using geofencing, meaning you could go full speed on private roads and trails, then have the bike automatically drop back to local speed limits when you join a public road. Or the speed limit could be lower in the city center, then automatically boost higher when riders hop onto a larger, faster road.

But BMW knew quite well what it was doing, stating that the e-bike concept was more about encouraging a conversation about updating electric bicycle regulations to include higher speed and more powerful offerings. As the company explained:

“In the absence of any existing legal framework for a vehicle of this kind with a modular speed concept, the “AMBY” Vision Vehicles set out to prompt the introduction of such legislation and, by consequence, developments of this nature.”

Good luck with that.

The high-speed and geofencing capabilities of the e-bike weren’t the only head-turners. BMW also outfitted the e-bike with a 2,000 Wh battery, which is around 3-4x the average e-bike battery size today.

The company claims that in the lowest power mode, the e-bike would be capable of 300 km (186 miles) of range on pedal assist.

“Would be,” you know, if it wasn’t just a concept…

A $750 three-passenger electric bike from Alibaba

If you weren’t already aware, I write a weekly column known as the Awesomely Weird Alibaba Electric Vehicle of the Week. You pretty much either love it or hate it.

The series is a largely tongue-in-cheek column where I find a fun, silly, or outrageous electric vehicle on China’s largest shopping website. It’s always awesome, weird, or both.

This time I found a particularly intriguing electric bicycle designed for three riders. As awesomely weird as the design was, a big driver in its interest was likely the $750 price tag, combined with free shipping.

That was for the “low capacity battery” option, which was just 384 Wh. But you could bump up to options including 720 Wh, 840 Wh, or a ridiculous 960 Wh pack, all without pushing the price over $1,000. That was pretty amazing by itself.

The bike wasn’t overly powerful, with somewhere between 400-600W of power.

But the utility of the thing really brought it home. Three seats, full suspension, a pet cage (which I think should probably never actually be used for a real pet), and more made this thing feature-packed.

There was even a motor lock to keep someone from being able to use the bike if they stole it, rear footpegs, front folding footpegs, folding pedals (basically lots of places for three people to put their feet), and more!

Just check out all the features below.

I was in fact so enamored with this weird little e-bike after writing about it, that I went ahead and put my money where my mouth was by buying one. That turned out to be a rollercoaster of a ride after it took months to make it through the cargo ship backlog off of Long Beach, California. When it finally landed, the container it was in was “damaged” and my bike was “undeliverable.”

I now have a replacement bike on its way, and hopefully this one actually gets delivered so I can share with you how the bike performs in real life.

Sometimes the biggest EV news stories aren’t about a particular vehicle at all, but rather bold new technology.

That was the case when Schaeffler showed off its new electric bicycle drive-by-wire system known as the Freedrive. It completely removes any chains or belts from an e-bike drivetrain.

Instead of any form of mechanical linkage to the rear wheel, the pedals simply powered a generator that transferred electricity to the e-bike’s hub motor.

It’s a really fascinating system that opens the door to wildly creative e-bike designs. One of the most applicable will initially be cargo e-bikes, which are often hamstrung by needing to connect a pedal drive through mechanical linkage to a rear-drive wheel that is located far away and many times out of line with the pedals.

We saw the drive in action at Eurobike 2021 installed on a particularly large cargo e-bike and it worked pretty awesomely, though the team is still tweaking it to improve the performance across the entire gear range.

Not to be outdone by BMW, Dutch e-bike manufacturer VanMoof announced a high-speed hyperbike known as the VanMoof V that would reach either 31 mph (50 km/h) or 37 mph (60 km/h), depending on which company rep or press release you read.

The full-suspension electric bicycle isn’t just a concept though. While BMW made no indication that it planned to produce its wildly fast e-bike, VanMoof says it will actually bring its own hyperbike to market.

Taking a page out of BMW’s book though, VanMoof also claims that the goal is to push the discussion of e-bike regulations forward.

“The VanMoof V is our first hyperbike, an e-bike dedicated to higher speed and longer distance. I believe this new type of high-speed e-bike can fully replace scooters and cars in the city by 2025.

We’re calling for policies designed around people, rethinking how public spaces can be used if not occupied by cars. I am getting very excited thinking about what a city could look like in the near future, and we are very proud to be part of the change by building the right tools for the transition.”

Tax credits jump to $900 for e-bikes, $7,500 for electric motorcycles in Build Back Better Act

Electric bicycle federal tax credits similar to those available for electric cars have been big news this year ever since they were first proposed in Congress back in February.

While some thought that e-bike tax credits were a long shot, the proposal got a huge vote of confidence when it passed an actual vote in the US House of Representatives as part of the Build Back Better Act.

The tax credit is capped at a max of $900, down from an initial plan for a $1,5000 limit. It would only apply to electric bicycles priced under $4,000. The original plan limited the tax credit to e-bikes priced under $8,000. The lower limit rules out some of the more expensive e-bike options that carry price tags related to their ability to spend years replacing cars for everyday commuting.

While several models of e-bikes can still be found for under $1,000, most popular e-bikes cost several thousand dollars and would still fit within the pending framework.

The inclusion of electric bicycles in the federal electric vehicle tax credits comes after extensive support and lobbying from the public and groups like PeopleForBikes.

“The House’s latest vote on the Build Back Better (BBB) Act embraces bicycles as part of a climate solution thanks to new financial incentives for bikes and e-bikes and grants for climate and equity focused infrastructure improvements. We urge the Senate to take up the BBB before the end of the year so we can get to work on lowering transportation emissions while keeping all people, no matter how they travel or where they live, moving.”

We saw plenty of new and exciting electric bicycles in 2021, along with new technology and pushes to reframe the question of what makes a legal e-bike at all.

Now 2022 could be shaping up to become an even more exciting year as manufacturers begin to recover from crippling supply chain shortages, allowing them to bring new ideas and models to market.

What do you think we’ll see in the e-bike industry in 2022? Let’s hear your thoughts in the comment section below. And for a bit of a nostalgic journey back in time (by 12-24 months), check out last year’s top e-bike news stories of 2020.