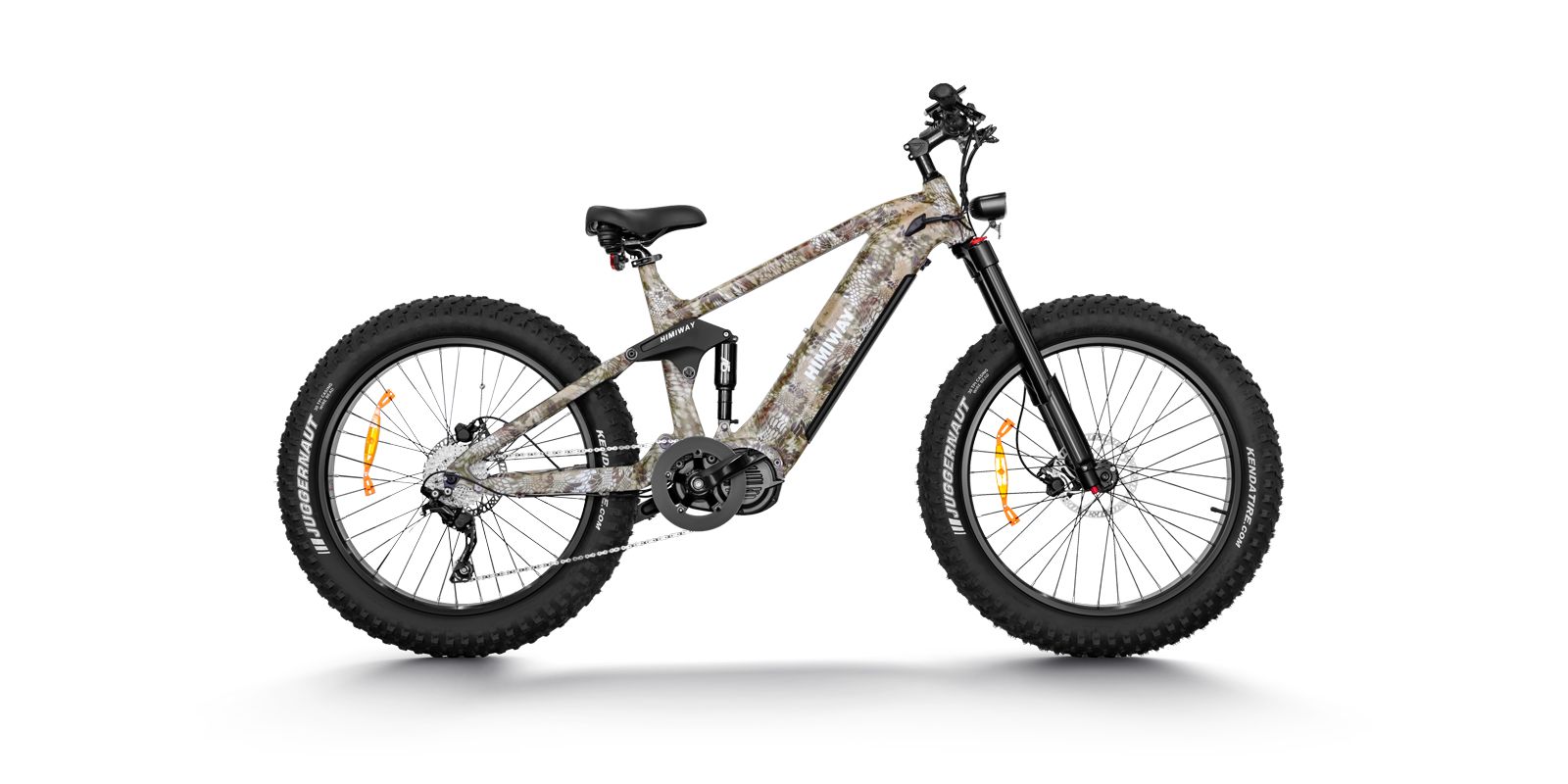 Himiway has long offered just two models of e-bikes (or technically three if you count step-over vs. step-through), but times are changing and so is the company’s electric bike lineup. The three new models also swap in several new upgrades, such as better motors and more premium brakes.

The Himiway Zebra is the company’s first new model, and rolls in on fat tires with a more trail bike setup than the existing Himiway Cruiser we’ve seen before.

The new e-bike includes a large 48V and 20Ah battery with 960Wh of capacity. The battery is integrated into the frame, removing the eyesore of an exposed battery.

Himiway claims a range of 60-80 miles (100-130 km), which sounds a bit high from where I’m sitting. Easy-going pedal assist riding using the cadence-based pedal assist sensor might get close to that, but the throttle will surely burn though that battery much quicker.

Even if the range claim is a bit lofty, that’s still a much larger battery than we see on average e-bikes in this class.

The bike sports an updated motor that improves upon the hub motor in previous Himiway e-bikes with better heat resistance and is said to offer better longevity. The 750W motor puts out 86 Nm of torque, and propels the bike to a top speed of 20 mph (32 km/h) out of the box. Past Himiway e-bikes have been modifiable to around 50% higher speeds, but it is not yet clear if the new models will follow suit.

Other improvements over past Himiway e-bikes include hydraulic disc brakes, brighter lights, improved suspension fork, and a more comfortable saddle.

The bike is available in either white or black and in a step-over or step-through frame. Priced at $1,999, it looks like Himiway might be trying to compete with some higher-end electric fat tire bikes, such as the RadRover 6 Plus that have recently entered the market.

Himiway’s new cargo e-bike is known as the Big Dog, though it doesn’t take the oversized longtail format we often associate with large cargo e-bikes.

Instead, it looks more like a utility style e-bike with multiple large rear rack options.

The rear rack looks to sport a nice-looking wooden platform, something that has become a signature of Himiway’s past e-bikes.

The Big Dog is also rated for up to 400 lb. (186 kg) of capacity, which is much larger than most electric bikes and matches some of the heaviest duty haulers.

Priced at $2,099, the Big Dog is several hundred dollars more than many utility e-bikes on the market, though does offer a few nicer upgrades compared to more budget-level options.

Last but not least are two full-suspension fat tire e-bikes.

The Himiway Cobra uses a similar 750W hub motor, while the Cobra Pro opts instead for a Bafang M620 mid-drive motor. That mid-drive just happens to be one of the most powerful options on the market, and has been known to offer crazy performance, destroy chains, or sometimes both.

Both models use four-bar rear suspension and are available in either a black/gray snakeskin that looks carbon fiber-ish, or a forest camo pattern.

They include similarly large 960Wh batteries with lofty range ratings of up to 80 miles (130 km).

The Cobra and Cobra Pro are both rated for up to 28 mph (45 km/h). Himiway even includes a cute little speed statement, claiming “For the U.S market, the top speed of Himiway Cobra is around 28mph without pedaling, which is absolutely legal.” Ehh, kind of. In some places. But generally you need to be using pedal assist to hit 28 mph legally, at least in Class 3 states.

The Himiway Cobra will set riders back $2,399, while the high-powered mid-drive Cobra Pro carries a much heftier price of $3,999.

Himiway has been beset with claims of customer service-related problems, coming at a time when many companies are dealing with similar issues. Himiway now offers a two-year warranty on the frame, battery, and non-consumable components, which is perhaps the company’s way of assuaging those fears.