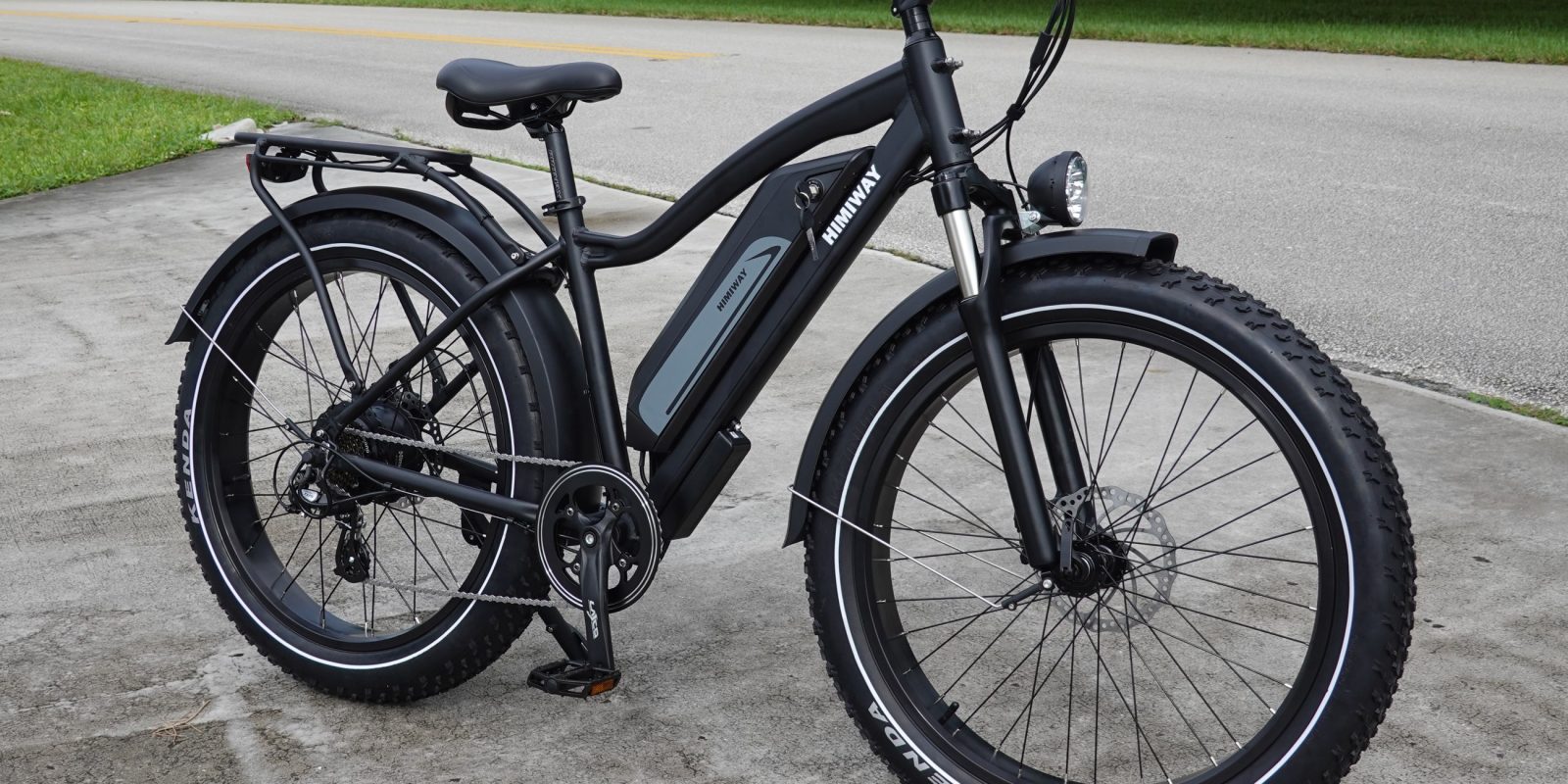 I recently had the chance to put some miles on a Himiway Cruiser electric bicycle. With front suspension, big tires, a 750W motor, and battery for days, the bike turned out to be quite a ride and performed better than I expected!

As someone whose job is pretty much to ride e-bikes, I’ve gotten quite good at guessing what question I’m about to get when someone rolls down their window or shouts to me from the curb.

And usually in that order.

Usually, I can impress my admirer with the first two answers, though the third is often like letting the air out of a balloon.

Check out my video review of the Himiway Cruiser electric bicycle below!

Give me the good and the bad

Let’s start with the good.

First of all, the bike has great specs. Even though it comes with a top speed of around 22 or 23 mph (36 km/h) out of the box, you can go into the settings and increase the speed limit.

That allowed me to get it up to around 28 mph (45 km/h) with a full battery, though the top speed drops lower when the battery is at a lower charge. That’s pretty standard for electric bicycles in unlimited mode, as an electric motor’s speed is voltage-dependent.

The bike also has quite a long range. With a 48 V and 17.5 Ah battery comprising 840 Wh, the 35-60 miles (55-96 km) range rating is actually realistic. At 20 mph (32 km/h) on throttle only, the lower end of that range window is absolutely achievable. And with moderate pedal assist, 60 miles (96 km) from an 840 Wh battery is also quite reasonable. Of course, if you modify the speed limit and ride at top speed all the time, don’t expect to get the same range.

I also like the rear rack, which I believe is bamboo. It straight up looks like my Ikea cutting board, in a good way. The wood deck of the rack means you don’t get that nice spring clip that some e-bikes carry, but you do get a couple of rails under the deck that you could conceivably connect a pair of $5 bungee cords to and be all set.

You also get fenders, which for the bike’s $1,399 price isn’t always a given. Plenty of e-bikes above this price still charge extra for fenders.

Ok, so what about the bad?

For starters, this isn’t really a cruiser. It’s a fat tire bike. It’s basically a RadRover knock-off. So don’t expect it to ride like a cruiser. It’s still somewhat upright, but this ain’t no beach cruiser.

Next, while there’s front suspension, there’s no rear suspension and thus the off-road ride quality totally depends on your air pressure. I like to let some air out of those big tires when I’m riding on grass or trails, which gives me a nicer ride. But then when I get back on the street, my handling suffers and I feel sluggish and unresponsive in the turns with lower air pressure. There’s a happy balance in there somewhere perhaps, if you can find it.

Also, I was never really sure if I mounted the tail light correctly. It doesn’t come connected, so you have to snake the wire back there and screw it in yourself. There were more holes than screws and no instructions, so I just screwed away and the light seemed to stay there, so that was a good sign.

But then there’s a good 12 inches of extra wire that you don’t need, and which could dangle down onto the rear fender, so I just wrapped it around itself and applied a liberal amount of zip ties to hide the ugly little rat’s nest.

It was fine in the end, but it didn’t feel like as nice of a solution as I would expect. It felt more like I was assembling one of my DIY e-bikes, not spending a good number of Benjamins on a retail e-bike that should have things like wire lengths figured out. Or that should even do me a solid and screw on the tail light for me like every other e-bike. I get that headlights are normally a DIY job since they sit further forward and don’t have the front wheel installed to protect them in the shipping box. But the tail light? C’mon, guys.

While I still have my nitpicks about the Himiway Cruiser, ultimately it feels like a solid deal to me.

It’s a fast and fun e-bike. It’s got that nice big battery. It doesn’t break the bank at $1,399. It has decent level components like Tektro disc brakes and Shimano 7-speed transmission. You even get full metal pedals instead of dinky plastic pedals, which sometimes come at this price point. And the bike generally feels well put together.

I don’t expect to get the same level of support as going with a giant company like Rad Power Bikes but that’s part of why you can save money on an e-bike like this while getting more speed and power than the competition.

Everything in life is a series of tradeoffs. And the Himiway Cruiser is no exception. But the tradeoffs seem reasonable in exchange for the performance boost and pretty-darn-good feel of the bike. So I chalk it up in the win category.