Nissan unveils ‘Ambition 2030’ electric car plan – are they finally coming back to EVs? 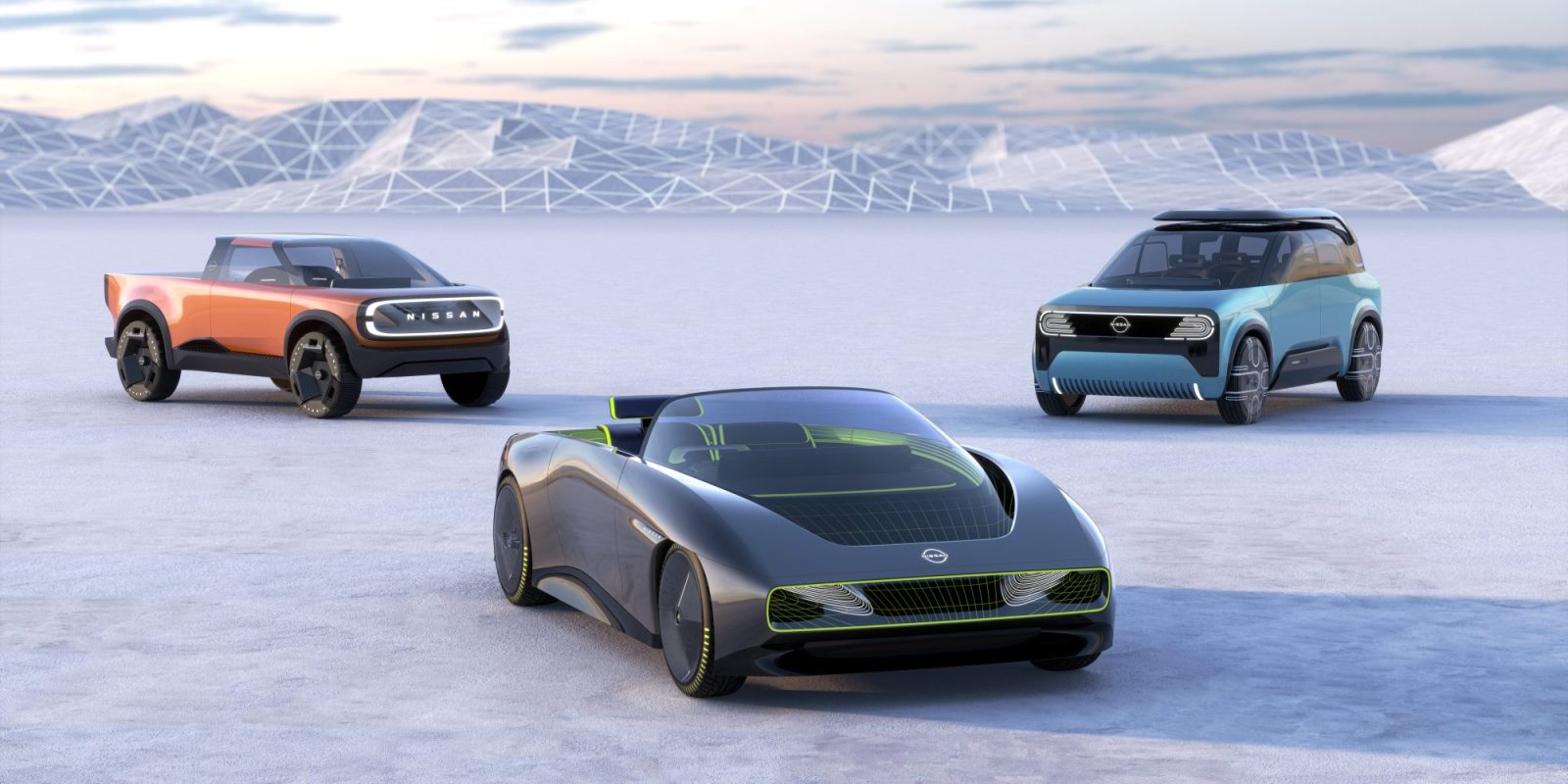 Nissan has announced a new electrification plan intending to bring the company into the electric age with four new concepts, $17 billion in investment over five years (including solid state batteries), and 15 fully electric models by 2030.

In this context, “electrification” does not only include all-electric vehicles, but also hybrids like Nissan’s e-Power system. Nissan did not specify what percentage of its “electrified” sales will still consist of poisonous gas-burners.

To give a sense of what Nissan’s future EVs might look like, the company revealed four concepts: Chill-Out, Max-Out, Surf-Out, and Hang-Out. These take the form of a crossover, a low-slung convertible sports car, an adventure truck, and a mobile living room with rotating seats.

All of these are just concepts at the moment, and Nissan has not stated whether any of them are intended to become production models. The Chill-Out and perhaps Surf-Out seem more realistic than the other two, though.

Regardless of whether these specific concepts get made, Nissan has promised 15 new all-electric models and 8 more new “electrified” models by 2030 (though we’ve seen similar deadlines from other companies breeze by with little action before).

To enable this switch toward electrification, Nissan will invest 2 trillion yen ($17.6 billion) into related programs and up battery production to 52GWh by 2026 and 130GWh by 2030.

Nissan said that the climate crisis is “the most urgent and non-negotiable issue for the world today.” To this end, it plans to reduce production emissions by 40% by 2030, and to be carbon neutral across the life cycle of all of its products by 2050.

One target of Nissan’s investments will be a plant for solid-state battery production in Yokohama as early as 2024. Nissan hopes that solid state batteries will enable higher energy densities and higher charge speeds, and aims to have them on the market in 2028. Nissan also says that solid state batteries will enable lower costs (though given that the Leaf, post-incentive, can be the cheapest new car in some US states, how much cheaper can it get?).

You can watch the full 49-minute-long announcement on Nissan’s Youtube channel:

Nissan was an early leader in electrification with the Leaf, which first hit the road in 2011 – beating even the Tesla Model S to market. In fact, the Leaf was the best-selling EV both in the US and globally for several years, until the Tesla Model 3 eclipsed it in early 2020.

But after the Leaf, nothing much happened. Nissan showed a few concepts here and there (am I really the only person who remembers the Infiniti LE concept?), but other than the refreshed Leaf, it hasn’t done anything new and electric.

Finally, more than a decade later, the Ariya is coming out soon™ and Nissan just started taking orders, but it has taken too long to get here.

Nissan’s commitments today were large, but after a decade of waiting for anything from the company, it’s hard to take them all at face value.

The company didn’t say when it plans on ending sales of gas cars completely (but it better be before 2035), though its “50% electrified” target means it has committed to at least 50% of new car sales having a gas engine in 2030. Frankly, that too seems unrealistic. When Ford, GM, and Stellantis made a similar commitment at 50%, we asked: “who’s going to buy the other 50%?” Because, seriously, why would anyone want an outdated, poisonous pollution spewer in 2030 and beyond (much less today)?

Plus, the concept of “becoming carbon neutral by 2050” is kind of like promising to quit drinking by 2050. Hey, that’s great, but if you understand how damaging a behavior is now, how about you make a change now, not in 30 years. In the last 30 years, humanity has emitted more carbon than it had emitted in all of history combined prior to 1990, so waiting 30 years to fix the problem only ensures that we continue on the same path of perhaps doubling our historical output once again. It’s not hard to imagine the disastrous results of that.

We have been happy with Nissan’s action on EVs in the past, and it still remains a standout among Japanese companies (which largely aren’t taking electrification seriously). The Leaf is a solid, mature, serious EV and is a great value (though a little long in the tooth with its outdated 50kW CHAdeMO). The Ariya looks quite exciting as well.

But it’s been very disappointing to see Nissan squander their early lead on EVs and sit for too long on the Leaf alone. These new plans put it basically on par with the industry, not ahead of it, and we’d like to see them do better.