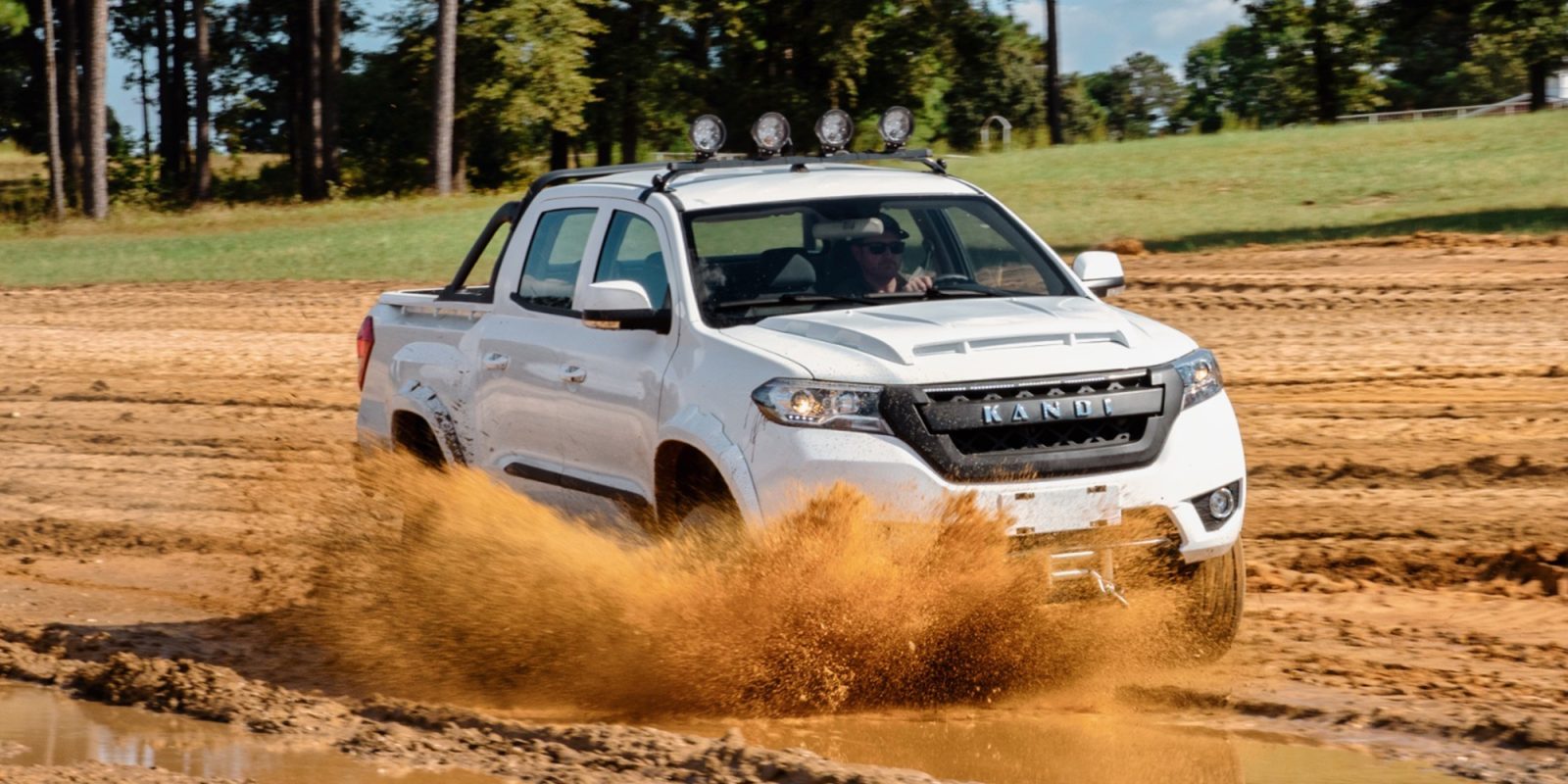 Kandi America has introduced a new off-road, all-wheel-drive EV model in the US, set to deliver in Q1of 2022. While the K32 EV may resemble a pickup truck at first glance, Kandi America classifies it as a Utility Terrain Vehicle (UTV), given its smaller battery and power rating compared to other passenger EVs. The K32 will come in two variations starting at $27,700, possibly less with federal and state tax incentives considered.

Kandi America is a wholly-owned subsidiary of Kandi Technologies Group, Inc. ($KNDI) out of China. After developing EVs and NEVs (Neighborhood Electric Vehicles) alongside Geely in China, Kandi expanded to the US in 2019, initially selling two models beginning in Texas – the K27 and K23.

These two models were eventually joined by NEV versions of the K27 and K23, which are limited in top speed to 25-35 mph (depending on the state). In this sense, Kandi hoped to bring some of its smaller, more affordable NEV options from China to US consumers.

In 2020, notorious short-seller Hindenburg Research released a report claiming the automaker falsified sales numbers to raise capital from US investors. Since then, Kandi America has remained relatively quiet, apart from recently removing the standard EV versions of the K27 and K23 from its website.

With its most recent announcement, however, the two remaining Kandi NEVs will soon be joined by an AWD off-road EV the automaker describes as a UTV.

In a recent press release, Kandi America unveiled its latest EV model, the K32 off-road UTV. According to the company, the K32 was designed by combining Kandi’s existing EV technology with recreational vehicles in mind. Kandi America CEO Johnny Tai spoke about the new vehicle:

According to the Kandi website, the K32 will come available in two versions, both equipped with dual-motor, all-wheel-drive capabilities. The Standard Range K32 will offer 60 miles of estimated range from a 20.7 kWh battery, while the Long Range UTV promises up to 150 miles of range from a 50 kWh battery. Check out the rest of the specs below:

Kandi America plans to begin deliveries in Q1 of next year. Currently, the Standard Range K32 starts at an MSRP of $27,699, while the Long Range off-road EV starts at $34,499.

Check out some video footage of the K32 below:

Honest question: Has anyone in the US ever seen a Kandi EV of any model in person? Texas readers? Please report back.

So the K32 is actually a utility vehicle disguised as a passenger pickup. At first glance, it’s quite cool and surprisingly large… especially compared to Kandi’s other offerings.

AWD and off-road are two enticing buzzwords for a vehicle like this, so that cannot be overlooked, but when you dig into the performance specs, it’s easy to brush this EV off and move on.

60 miles of range and a 20+ kWh battery pack just aren’t going to cut it with consumers these days, no matter what they’re using the vehicle for.

Maybe that’s why Kandi does not mention the word “truck” once, and instead uses “UTV.” That’s fine, honestly, as this could end up being one hell of a cool UTV, but I’m curious who is going to purchase one for that price? More importantly, do consumers even know about Kandi America? Should they?

Perhaps the K32 turns some heads and puts Kandi on the US map. Perhaps Kandi remains lost in the ether of EVs between being too small or too expensive for the performance you get.

I think Electrek needs to try the K32 ourselves and report back.