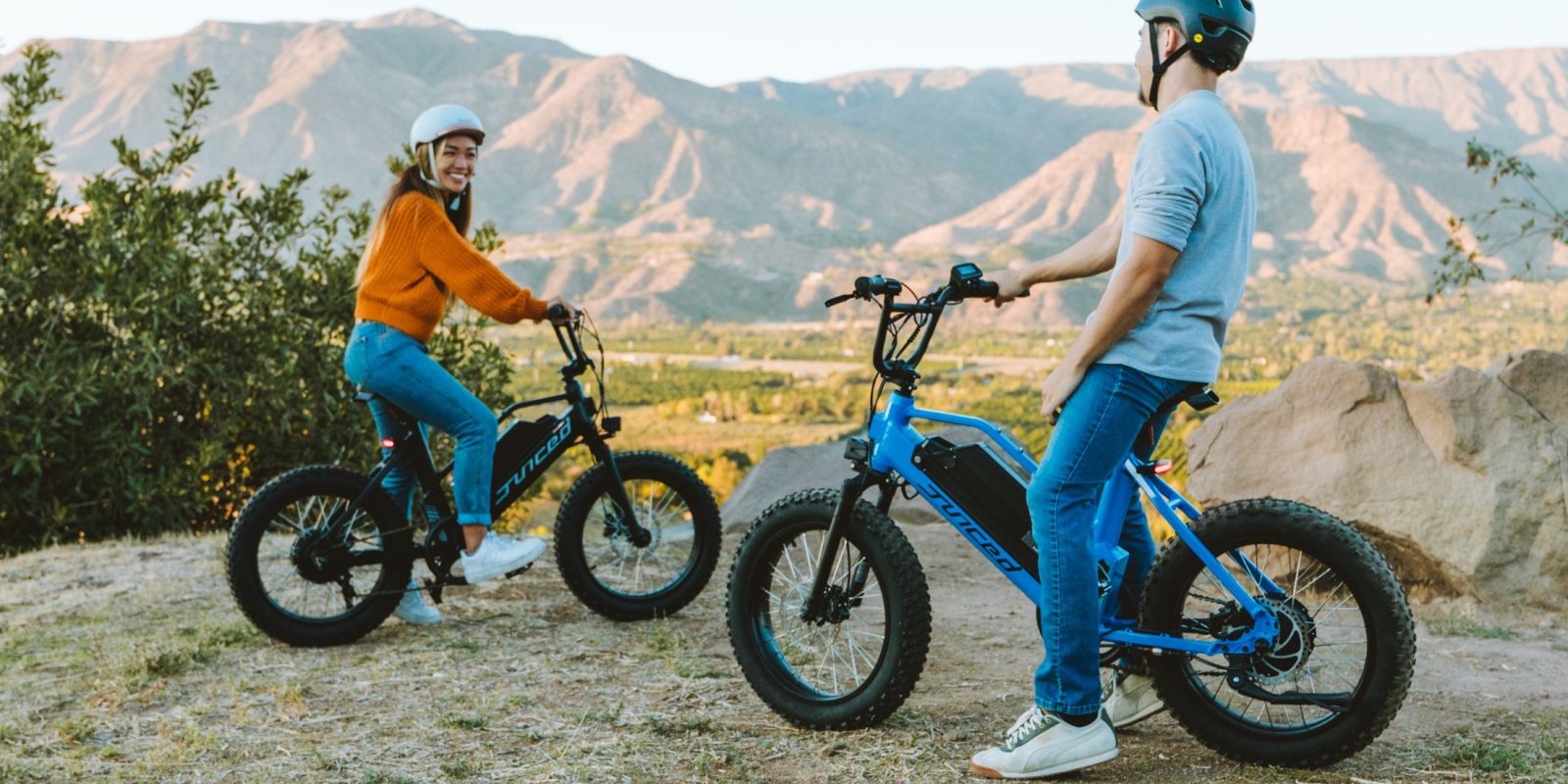 The RipRacer, which starts at just $1,399, is something of a little brother to the larger Juiced RipCurrent e-bike.

While it retains fat tires that help the bike perform well on- and off-road, it shrinks those tires down to a 20-inch format.

Combined with the smaller frame, the RipCurrent turns into a compact runabout that still packs in the power and range that Juiced’s riders have come to expect.

It also adds new tech, such as the first-ever Apple AirTag-integrated battery that stands a chance of being located if it’s ever lost (or more likely stolen).

Both of those ranges are based on pedal-assist operation, meaning the rider’s pedaling power is boosted by motor assistance. When ridden using only the throttle (i.e. no pedaling necessary), the range is reduced due to the increased power demand.

The Class 2 version includes a 20A controller that will pull around 1,040 peak watts, while the Class 3 version’s 25A controller will be good for a slightly higher 1,300 peak watts.

One other difference between the two models is the display, with the Class 2 version featuring a more simplified display than the full-featured Class 3 version’s display.

Both versions of the Juiced RipRacer feature 750W continuous-rated geared hub motors and include some impressive tech such as hydraulic disc brakes and Apple AirTag-integrated batteries (though it appears to be a bring-your-own-AirTag situation with a specially designed compartment in the battery case). The batteries feature a redesigned case that includes a carry handle, improved water resistance and can be mated with a charging dock accessory that will debut late next year. The dock will also allow other electronics to be powered from the battery, functioning similar to a generator or portable backup battery. The batteries are backwards compatible with all of Juiced’s previous 52V e-bike models.

While the bikes include some impressive new tech, the much-loved torque sensor found on most of Juiced’s electric bikes is swapped for a lower-spec cadence sensor, which means the pedal assist isn’t quite as responsive as true torque sensor-enabled e-bikes like Juiced’s Scorpion electric moped.

Skipping a few of the higher-end parts like torque sensors and front suspension (note the BMX-style fork in its place) helped bring the bikes’ prices down. The Class 2 model will be priced at $1,399 while the Class 3 model will fetch a slightly higher price of $1,599. Both are considerably lower than most of Juiced’s other e-bikes. The Class 2 version is one of the lowest prices on the market for a 750W e-bike with hydraulic disc brakes.

That puts the RipRacer in an interesting niche in the market. Other low-cost fat tire e-bikes like the $999 Lectric XP 2.0 may undercut it on price, but the RipRacer offers higher-quality components and over 50% more battery capacity, not to mention interesting additions like the charging dock and Apple AirTag integration.

Other “fun-sized” fat tire e-bikes like the Pedego Element match the RipRacer on price but don’t come close to matching its power, speed, or components.

The smaller format of the RipRacer should make it more appealing to riders on the shorter end of the spectrum. The company says it should fit riders from 5’0″ to 6’3″ (152 to 190 cm).

As Juiced Bikes founder and CEO Tora Harris explained, the bike is largely designed to target a new generation of riders.

With a younger generation becoming more and more interested in electric bikes, we saw the opportunity to launch a smaller model at an entry-level price point, an e-bike that appeals to a wider audience, but of course with the signature performance features the Juiced brand is so well known for.

By offering a new frame style that’s a lot lighter and more nimble, and adding a range of colors, both new and experienced e-bike riders get a thrilling riding experience that’s also extremely functional and safe. And, like all of our e-bikes, It’s a great way to replace expensive and energy inefficient car miles.

The 66 lb (30 kg) RipRacer will be available in four color options of Baja Blue, Noir, Hi-Viz Yellow, and Mystic Green. It will go on sale on Thursday, November 26, though it won’t begin shipping until March of next year.