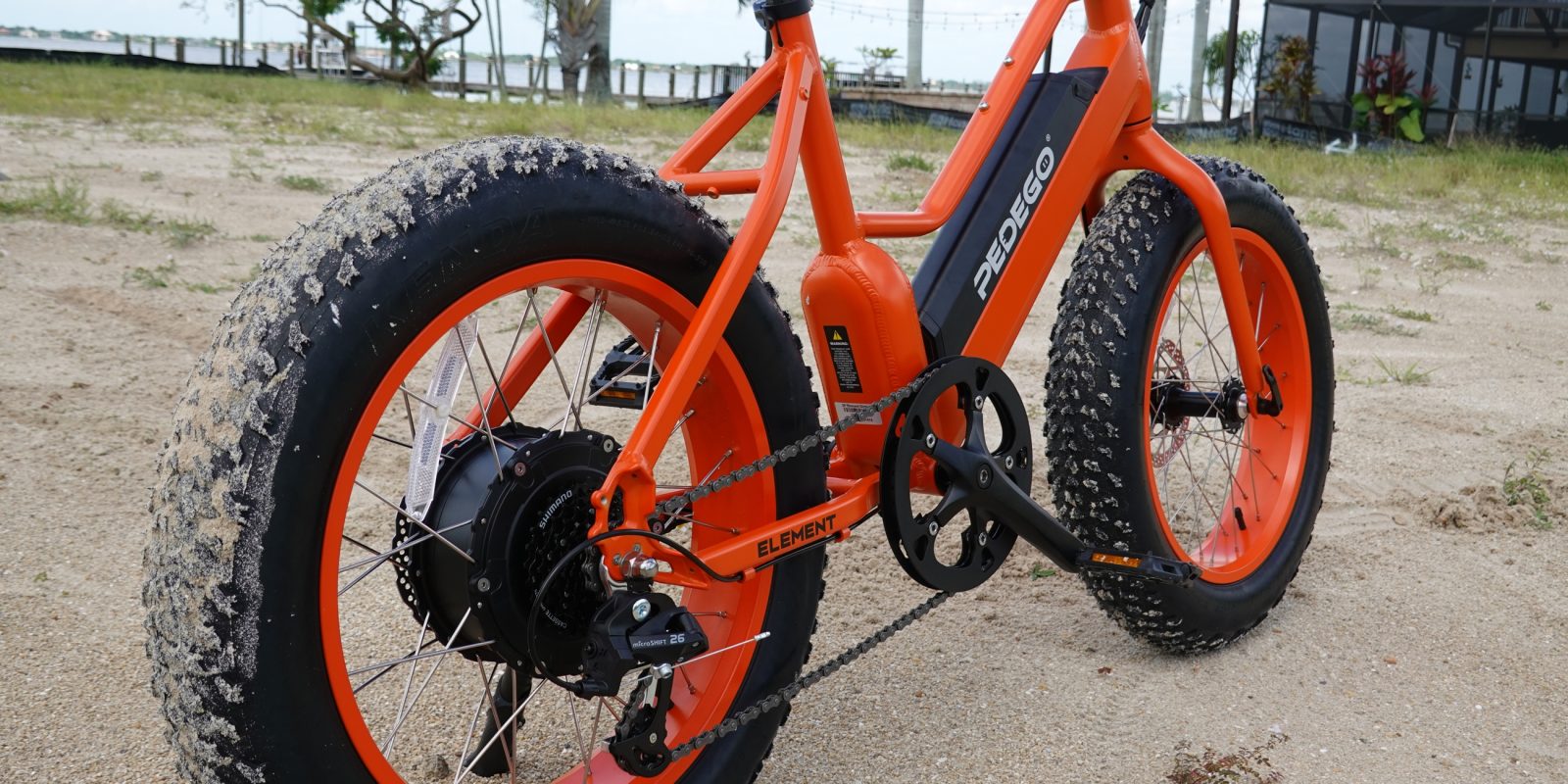 When Pedego, one of the largest e-bike companies in the US, debuted their most affordable e-bike ever last month, I knew I had to test it out. A few days later I was in the saddle of the new Pedego Element, cruising the streets, parks, and beaches to put the new e-bike to the test.

And here’s my story.

As a bit of background, the reason the Pedego Element had me so excited was that it was finally a Pedego e-bike that the masses could afford.

Pedego has 20-something e-bikes in their lineup, which is great. Except that they range from $2k to $5.5k. That price range can still be reasonable when you factor in Pedego’s 100+ dealer network, local service/support, and a list of other factors that we’ll discuss, but that doesn’t mean that it won’t still price out much of the market that can’t afford to spend several thousand dollars on an e-bike.

So to see Pedego launch the Element at a mere $1,495, it was obvious that the company was trying to become more accessible to a wider range of customers. And since I’m all about getting more people on e-bikes, that jibes well with me!

Make sure to watch the video below to see me putting the Pedego Element through its paces. Then continue reading for my full, detailed review!

In order for Pedego to reach their lowest price point ever, they had to make a few compromises on the Element.

For starters, there’s no suspension other than those voluptuous tires. The fork and frame are both rigid.

Next, you don’t get any extra features or components. It’s a perfectly functional e-bike, but there are no built-in lights, no rack, no fenders, no horn, no app, etc.

And you definitely don’t get premium parts like hydraulic brakes or a mid-drive motor.

But what you DO get is perfectly adequate for (and I’m just spitballing here) probably 90% of purely recreational and leisure e-bike riders.

You get a powerful motor rated for 500W continuous and 1,000W peak, a sufficiently large 480Wh battery (though Pedego’s other more expensive e-bikes of course get larger batteries) and you get both throttle and pedal assist support up to 20 mph (32 km/h).

So while there are no bells and whistles (ok, there’s actually a bell), the Pedego Element has all the right stuff you need for e-biking fun.

To me, the Pedego Element’s simplicity is part of its charm.

This is an e-bike that is purely built for riding. And I rode it hard.

From beach sand to curb hops and even a few nicely manicured roads for a change, I powered the Pedego Element across everything. I climbed over fallen branches and slung sand into the air with the same bike that I could comfortably cruise a boardwalk with.

With a top speed of 20 mph (32 km/h), I couldn’t get into too much trouble of course, but the power was sufficient to hit that top speed fairly quickly.

The pedal assist is perfectly fine, though nothing fancy. It is cadence-based and thus works well on flat ground but probably wouldn’t be my pedal assist method of choice on hills, which is where a torque sensor-based pedal-assist system really shines for me. And it will never be as smooth as torque-based pedal-assist systems, but what can you do. Pedego is aiming for budget territory here with the Element.

But with 500W (and 1,000W peak) of power at my disposal, I found myself just grabbing a bit of throttle anytime I wanted the pedal-assist to come on just a hair quicker.

With 480Wh of battery, I found that throttle-only riding at high speeds extrapolated out to a range approximately in the low 20’s of miles. That fits decently well with most e-bikes of this size and power level. And for anyone with more self-control than me to not touch the throttle and only use pedal assist, doubling the throttle-only range is pretty standard in low to medium pedal assist modes.

While I give the Pedego Element high marks on performance and value, the areas where it does suffer a bit are in ride quality and a short feature list.

The ride isn’t bad, please don’t get me wrong. It’s fine. If anything, it actually rides more comfortably than I expected for a non-suspension e-bike. And it sure is nimble with its short wheelbase.

But when you leave the smooth bike lanes or boardwalks and head onto trails or cobblestones, you’ll notice the bumps a lot more. When riding sand and trails, I spent a lot of the time rising out of the saddle and using soft knees to keep the ride nice and comfortable.

This won’t be much of an issue for riders that stick to nicer streets and sidewalks exclusively. But just know that if you want to take those fat tires off-road, be prepared to feel the contours of the earth.

Next, feature scarcity. The bike rides nicely enough, but it’s missing a few small things. Fenders would be a great addition for rainy areas, and I’d love to see an included rack to turn this bike into more of a utility e-bike. And built-in lights that run off the battery are always appreciated. The last thing I want to be doing is recharging a separate head and tail light or juggling a fistful of AAA batteries.

I must say that I LOVE the fat 20″ tire format — it gives wide tires that aren’t too tall and thus don’t take up as much of the bike’s space. And they leave room for a lower rear rack and a more stable cargo role. So I’d also love to slap a rack on the Pedego Element and see it fulfills yet another role as a little pack mule. It’s a shame it doesn’t come with one, but alas, that’s another accessory one can add.

And I’m sure you could customize this e-bike into exactly what you want. There are mounting points for racks and fenders. And you could buy a couple of cheap lights to outfit the bike. There’s room for additions and that even gives you more control over your component selection. But I still prefer to see an e-bike company include these types of components in the price so you don’t have to start shopping around to fully outfit a bike.

But at this point, I’m pretty much just searching for anything to complain about so this doesn’t look like a paid review (as a reminder, we don’t do paid reviews here at Electrek). Ultimately, I really do love the Pedego Element and I see it as a high-value e-bike that could make a great first e-bike for newcomers to the sport.

“Value” is a good way to put it. The Pedego Element provides good value. Not just in the bike itself, but also in the support you get with it.

If you scroll down to the comment section below, you’ll surely find plenty of readers telling me there are better values out there. I’ll eat my hat if there aren’t at least 2-3 comments in the first few hours about the $899 Lectric XP e-bike, which shares many physical characteristics with the Pedego Element.

But with the Element, you don’t just get some pretty decent components like Microshift transmission, 1,000W peak motor and “premium” battery cells (whatever those are), you also get Pedego’s vast national dealer network. Unlike direct to consumer e-bike companies, you can actually find a Pedego dealer nearby and test the bike yourself. Or you could just take my word and order one online. The options are there.

And if you ever have an issue, you don’t have to wait weeks to send a bike back to a company and receive it in return or be stuck doing a repair yourself when they mail you a replacement part. Pedego shops have their own in-house service centers, which is so much nicer than waiting for repairs from across the country.

So while the Pedego Element certainly makes compromises, you still get a lot of value for this $1,495 e-bike.

Not bad at all!