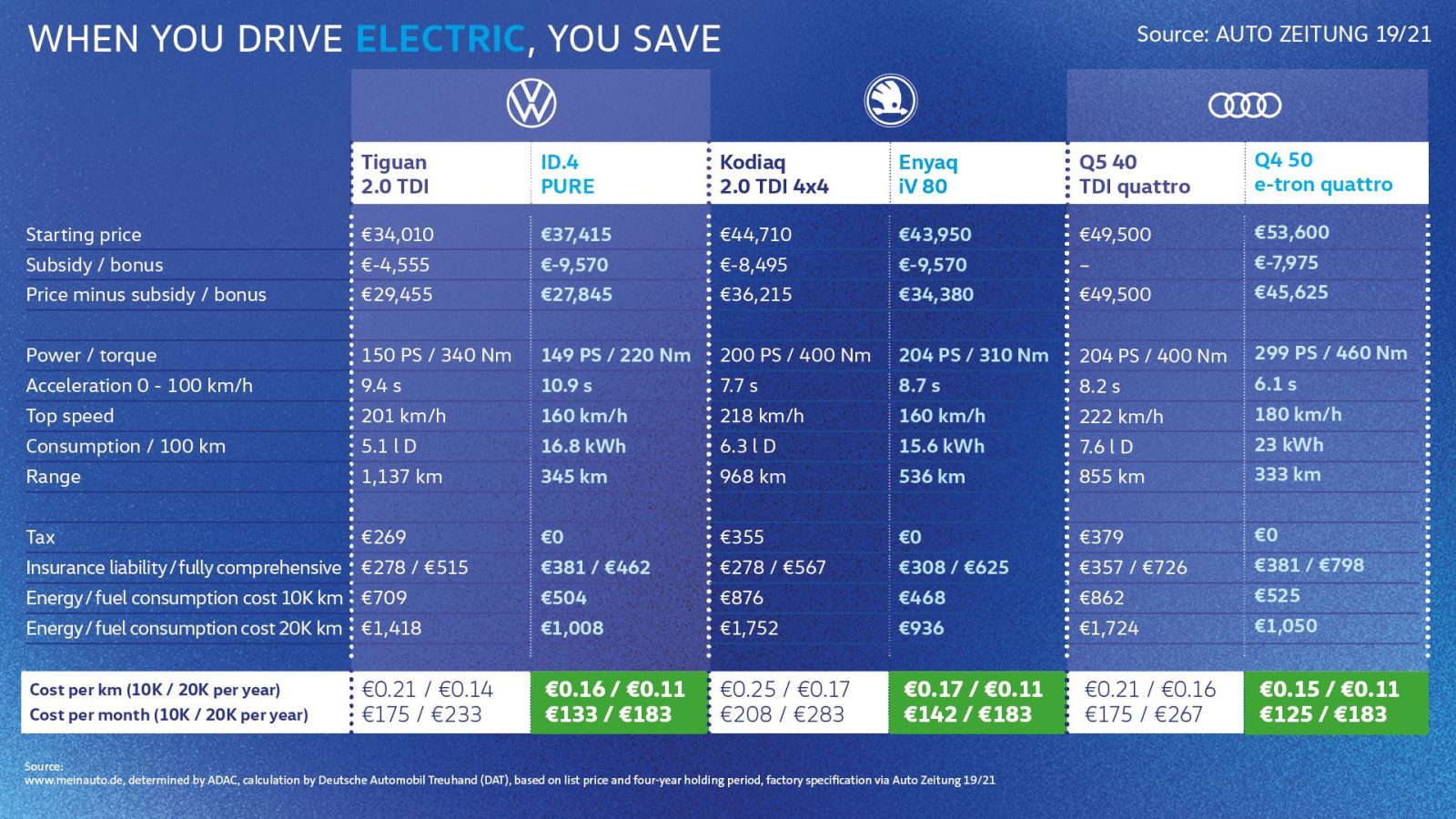 VW, the world’s largest producer of fossil-powered vehicles (by revenue), has produced a graphic comparing its diesel offerings to its electric ones, showing how across several model lines, the electric models come out way ahead in terms of total cost savings.

The data in VW’s graphic comes from Auto Zeitung, a German car magazine. The magazine did a series of tests of diesel and electric SUVs from various manufacturers, picking the closest equivalents within each manufacturer and pitting them against each other in specs and total cost of ownership.

Then VW took this data and produced its own table, focusing on the vehicles produced by brands they own (VW, Skoda, and Audi – the magazine also tested a BMW and a Mercedes, with similar results). In all cases, the electric version not only starts at a lower price, but has significantly lower running costs, leading to total monthly costs as much as 50% higher for the diesel compared to the EV.

The graphic was shared by VW CEO Herbert Diess on LinkedIn, who said “it’s time to switch” to electric:

This data is from Germany, so it takes into account local purchase prices, German incentives (subsidy for EVs, dealer rebates for diesel versions), German energy costs (which are high, both for electric and diesel), insurance, tax, and so on. Auto Zeitung‘s data also took into account depreciation and maintenance costs, though those were left out of the VW table. The final cost per km and cost per month are identical to Auto Zeitung‘s data, despite these omissions from the table.

Calculations will be different from place to place, but the general trend worldwide is that EVs are almost always cheaper to fuel and that end-user purchase prices are often comparable between similarly specced gas cars and their electric versions.

The most meaningful thing to note is that this table was publicized by VW CEO Herbert Diess, whose company produces as many cars as any company in the world (Toyota and VW have nearly identical unit sales). Over 96% of VW’s unit sales so far this year have been powered by fossil fuels. Despite that electric makes up such a small part of VW’s sales, Diess still chose to publicize that the vast majority of his company’s autos are overpriced compared to their closest electric competition. That’s quite a statement.

One thing holding incumbent manufacturers back from pushing EVs is that most of their sales come from gas vehicles. Since a vast majority of their revenue comes from gas vehicles, they worry about losing those sales in service of a powertrain that represents a tiny sliver of their total business.

Voltswagen seems to understand this. Even though it still sells a disappointingly high number of gas cars, all of which will continue polluting the air for years into the future, it does lead other incumbent manufacturers in EV investments and planned EV rollouts. And VW CEO Herbert Diess recently met with Tesla CEO Elon Musk to get VW’s upper management on board with EVs. Diess in particular deserves a lot of credit for his advocacy and vision here – though we could still hurry him on a little. VW is still not moving fast enough, but at least it’s not pulling a Toyota.

Diess is right when he says “it’s time to switch.” For many years, people have wondered when “price parity” would be achieved for electric vehicles, generally setting the date at some point in the future. But that date is already here. Auto Zeitung‘s numbers show that for similar vehicles, the EV is cheaper to own.

But the phrase “similar vehicles” does a lot of work in that sentence, because are they really all that similar? Electric cars are much more pleasant to drive and own than their gasoline counterparts, and the vast majority of electric car owners will tell you that the ownership experience is just so much better and that they aren’t interested in going back. And the calculus only gets better for EVs as each month passes and the world pivots more toward electrification.

So here we have vehicles with similar specs/options, but the EV has a lower starting price, lower ownership price, and a better experience. So what’s everyone waiting for? It’s time to switch.