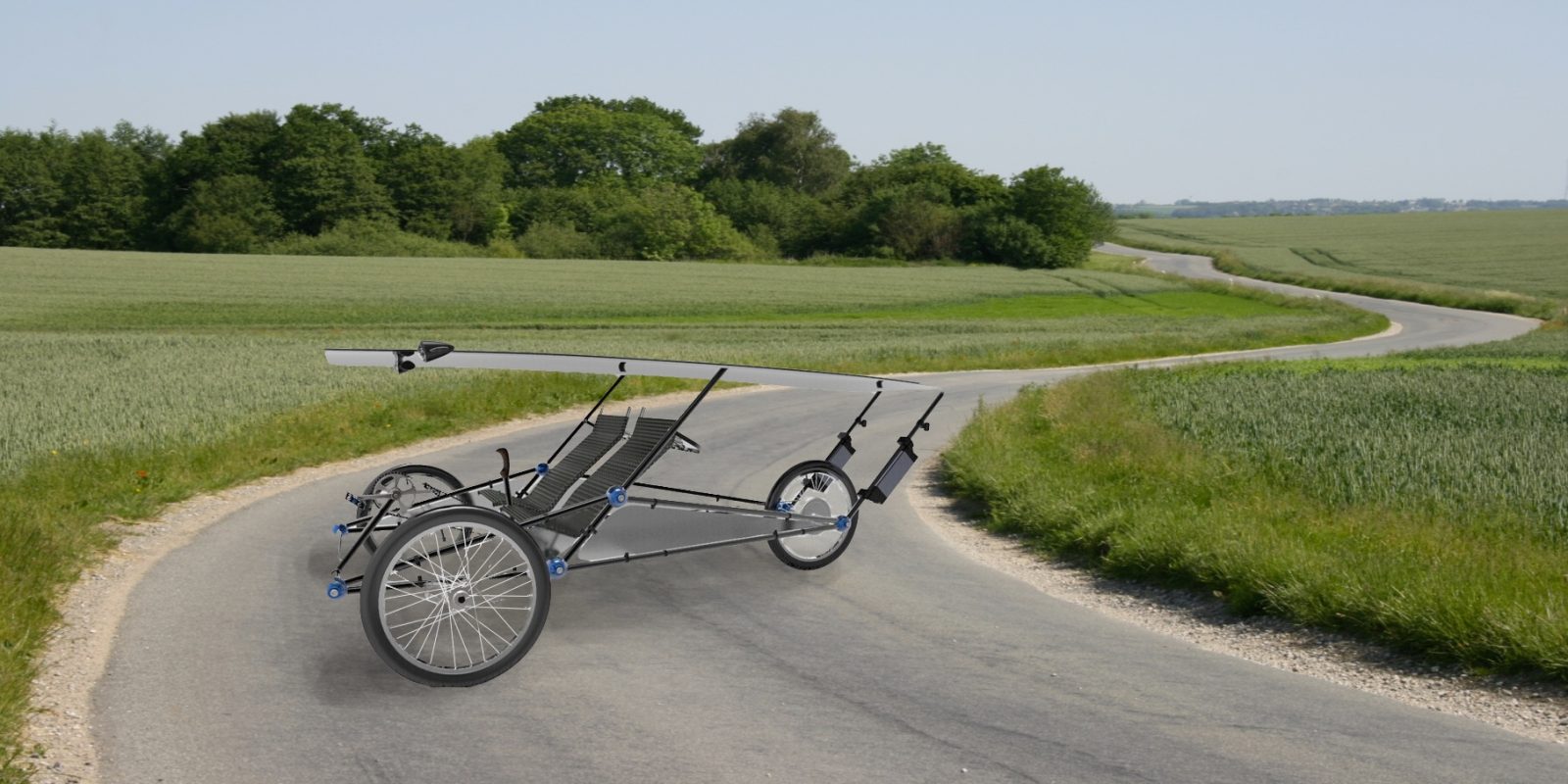 Two of my passions are electric bicycle projects and DIY solar powered projects. In fact I’ve written the book on both topics. So to see these two fields combined in one quirky-yet-awesome product totally made my week. I just hope you’re as excited as I am to dive into this strange electric bike/car contraption that boasts a heap of features from seating for two to a giant solar panel array offering nearly unlimited range!

It’s just one of many strange, awesome and fun-looking electric vehicles I’ve discovered while window shopping on the world’s most eclectic digital thrift store: Alibaba. And now it has the honor of officially becoming this week’s Awesomely Weird Alibaba Electric Vehicle of the Week!

We’ve seen solar powered electric bicycles before, but they’re usually designed with some serious pedaling requirements. The low power of even large-sized panels means that riders generally still have to provide some significant leg assist.

But this giant electric bicycle – errr, tricycle – has a huge canopy housing five 120 W solar panels for a total of 600W of power. It solved the panel size problem by wearing them as a hat instead of dragging them along behind the bike.

Keep in mind that you’re probably only going to get a maximum of 400W or 450W of real power in ideal conditions, but that’s still plenty considering the motor size.

They only outfitted the bike with a small 250W rear motor, so even spotty sun should give you as much power as you’re draining from the battery. That means you’ve got essentially unlimited range as long as the sun is out.

And even when the sun goes down, this solar-powered e-bike has you covered with a generous 60V and 20Ah battery packing 1,200 Wh of capacity. The batteries seem to be mounted on the two rear rails, so we’re likely looking at a pair of 60V10Ah packs in parallel.

If you assume a constant 250W draw, that’s nearly five hours of riding after the sun goes down. Plan your sleep pattern and bathroom breaks correctly and you could practically ride cross-country for weeks without ever having to plug in to charge. And the pair of pedals on the driver’s side means you could theoretically go it on your own if you ever ran out of juice after a particularly long cloudy period. Or you could carry an electric generator with you to recharge on the fly! Or you could just slap on a second 60V20Ah e-bike battery for cheap. The possibilities are as endless as the sun! (As in about 5 billions years more of them.)

The solar panel canopy also gives plenty of shade and even provides a mount for headlights hoisted up high for good visibility.

Slung below the canopy are not one but two recumbent style chairs that will surely prove much more comfortable than bicycle saddles on that cross country trip. How long you’ll be able to stand being shoulder to shoulder with your riding partner while cruising at a frustratingly slow top speed of 30 km/h (18 mph) remains to be seen.

It’s unclear how steering works as the rear wheel appears to be fixed and the front wheels lack an axle or articulating steering. Perhaps those details combined with the lack of any brake calipers connected to that handbrake lever might be a clue that this is an unfinished rendering. Either that or you steer it like a canoe and apply the brakes just like Fred Flintstone.

The only downside is that the Alibaba vendor has a minimum order quantity of 100 units.

Just for kicks and giggles, I started down that road and got a quote of around $36,000 for shipping to the US. So at $191,000 for a hundred units, I may just need to start my own solar racing league and let the sponsors pay the bill.

You know, if this thing actually exists.