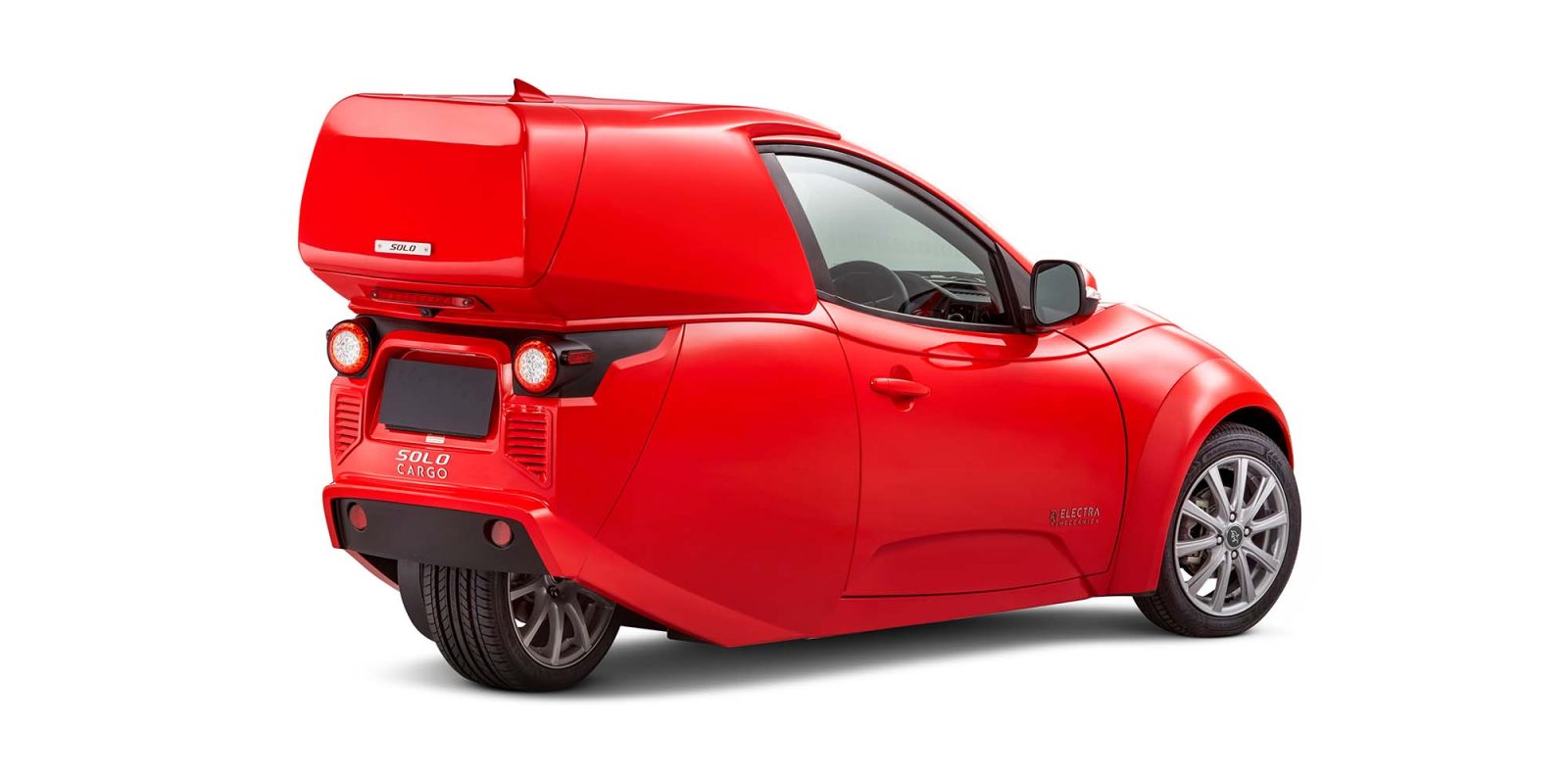 During this year’s ACT Expo in Long Beach, California, ElectraMeccanica debuted a “Cargo” version of its flagship three-wheeled EV, the SOLO. The new version, the “SOLO Cargo EV,” was designed with an expanded cargo box specifically for light commercial fleets for operations like deliveries. As a sponsor of the “ACT Ride and Drive” event today, the public can also test drive the SOLO EV outside the expo center.

ElectraMeccanica Vehicles Corp. ($SOLO) is a publicly traded EV designer and manufacturer traded on the Nasdaq and based in Vancouver, BC. ElectraMeccanica was founded in 2015, but its predecessor Intermeccanica has been building high-end specialty cars for over 61 years.

Last March, we reported that ElectraMeccanica had chosen Mesa, Arizona, as the new home to its US production facility. The company has also implemented 20 retail locations across five Western states to support the launch of its flagship EV, the three-wheeled, single-seat SOLO EV.

This environmentally friendly EV was designed with commuting and deliveries in mind, particularly in urban driving conditions. With that said, its 100-mile range and top speed of 80 mph makes it safe for highways.

ElectraMeccanica is now taking this design notion a step further with its new SOLO Cargo EV.

As part of a press release coinciding with the events at this year’s ACT Expo in Southern California, ElectraMeccanica announced a new Cargo version of the SOLO EV.

This expanded version of the single passenger SOLO EV was developed with an expanded cargo box as a result of direct input from ElectraMeccanica’s prospective commercial and fleet customers.

To create this Cargo version, the SOLO EV dimensions have been expanded to approximately 8 cubic ft. of cargo space. Still, the EV remains just 53 inches tall and about 123 inches long.

Furthermore, both the interior and exterior wrapping of the SOLO Cargo EV can be customized by ElectraMeccanica to fit a customer’s needs.

Warming and cooling elements are also available as third-party options for uses such as food delivery. President and CEO of ElectraMeccanica Paul Rivera, spoke about the new Cargo SOLO and its potential:

We are continuing to transform the way people think about driving and how they interact in the world, especially when solo. Consumers will be able to use their SOLO to commute to work, go to the gym, visit their friends, or to get a cup of coffee. Similarly, there are a wealth of light fleet, business, and commercial applications where single occupants dominate. From fast food franchise delivery and pizza delivery, to grocery delivery, small parcel and post, to tech repair and security firms, the SOLO Cargo EV is the ideal solution to help companies minimize operational costs and maximize efficiency.

In addition to being smaller and more compact on roadways and parking spots, ElectraMeccanica points out that its SOLO also qualifies as a motorcycle in most states. This generally means lower costs for registration, insurance, and operation while still qualifying for HOV (High Occupancy Vehicle) access.

The SOLO Cargo EV will still deliver the same range and top speed as its retail counterpart, along with additional storage for a number of applications. ElectraMeccanica will be showcasing both versions this week at the ACT Expo. Check your local retail location to see a SOLO Cargo EV up close in the future.