Here’s how this solar powered electric bicycle traveled 12,800 km in 64 days from France to China 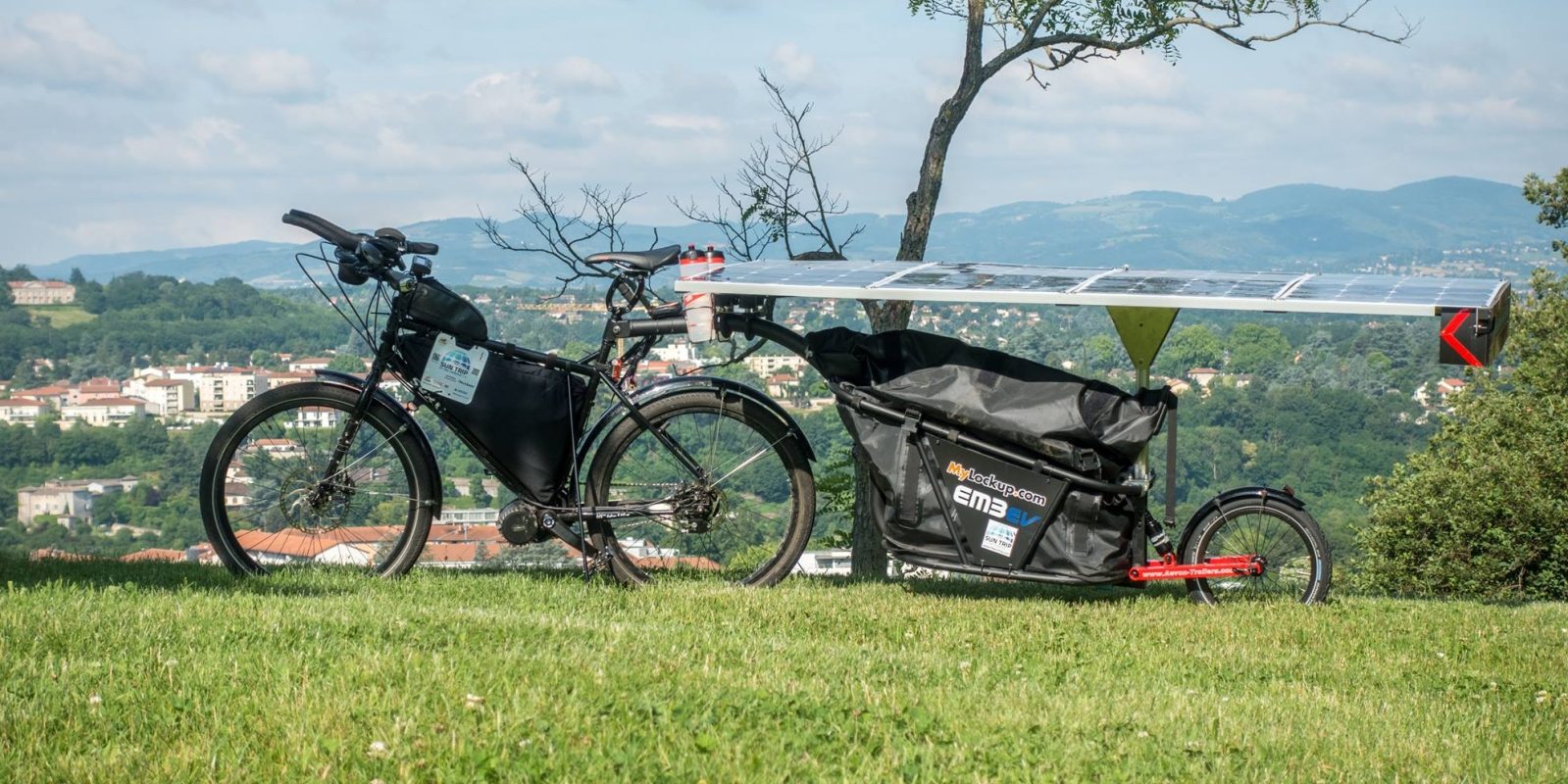 A self-sustained vehicle powered by the sun is something of a holy grail for electric vehicles, but is difficult to achieve due to the limited surface area and high power requirements of full size cars. However, a smaller EV such as a solar powered electric bicycle has an advantage here due to its drastically lower energy demands.

Over the last few months, a group of solar powered e-bikes raced nearly 13,000 km (8,000 mi) from Lyon, France to Guangzhou, China. Electrek caught up with Jack Butler, who placed 6th in the race, to hear how he succeed on such an extreme trip.

The Sun Trip is a semi-annual event that pits solar powered electric bicycle racers against each other over incredibly long journeys.

A unique feature of the Sun Trip is that there is no predetermined route. Instead, there is a common starting line and finish line, each separated by a decent sized chunk of the world. Between the two, the exact route is left up to the riders. As long as they charge their batteries purely from the sun, power their e-bikes only by electrical and leg power, and stick to overland travel (no airplane shortcuts!) then the rest is up to them.

24-year-old Jack Butler from Team NewQuest decided to enter the race for the chance to visit East Asia in the most environmentally conscious way:

“I love to travel and have wanted to visit East Asia for a while. I’m very aware that traveling can have a pretty negative environmental impact, particularly flying. As such, I haven’t flown for my traveling for about two years and the Sun Trip is pretty much the lowest carbon way to get from Europe to Asia.”

To enter the race, Jack built himself a custom mid-drive electric bicycle based on a Surly Troll bicycle with a pull behind suspension Aevon STD100 trailer for holding his gear and solar panels. While he saw many others using a bob-style trailer to hold batteries or even placing an extra motor in the trailer wheel, he decided to keep the entire powertrain contained solely on the bike to increase reliability. 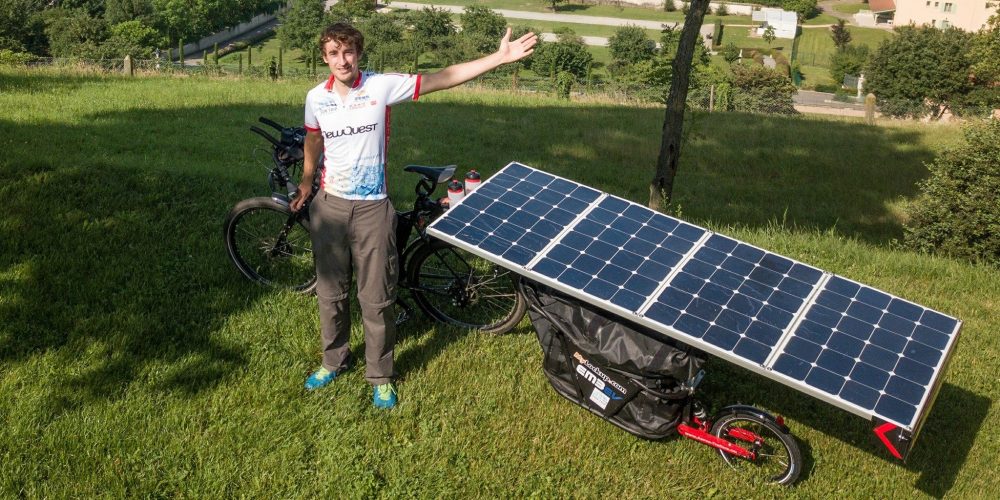 For energy storage, Jack used a 1 kWh triangle battery manufactured by EM3EV, which was just shy of the race’s maximum allowable 1.1 kWh of energy storage.

The bike’s electric motor was a BBSHD mid-drive, manufactured by Bafang and also supplied by EM3EV. The high-power mid-drive motor was capable of providing more power than necessary, which meant that it would be more reliable when used at a lower power level than it was designed to handle. Jack often found himself using 200 W or less while adding pedal power and maintaining a comfortable cruising speed.

The motor was connected to a Rohloff 14-speed internally geared hub in the rear wheel – another part chosen for its reliability on such a long and grueling journey.

The most important part of a solar powered electric bicycle is surely the solar charging. This was accomplished with an array of four panels, each rated at 75 watts. While Jack’s setup wasn’t the fanciest or most expensive compared to other racers, he said it was certainly enough to get the job done.

“Most of the solar arrays in the sun trip use varying grades of SunPower C60 cells. An easy way to compare different systems is just to count the number of cells. Although due to my low budget the cells I have vs some of the top guys are around 5-10% less efficient.”

While Jack is still awaiting release of the data from the Sun Trip’s datalogger installed on his solar powered electric bicycle, he estimates that he was providing on average around 50% of the total energy used by the e-bike, while the other 50% came from solar generated electricity. 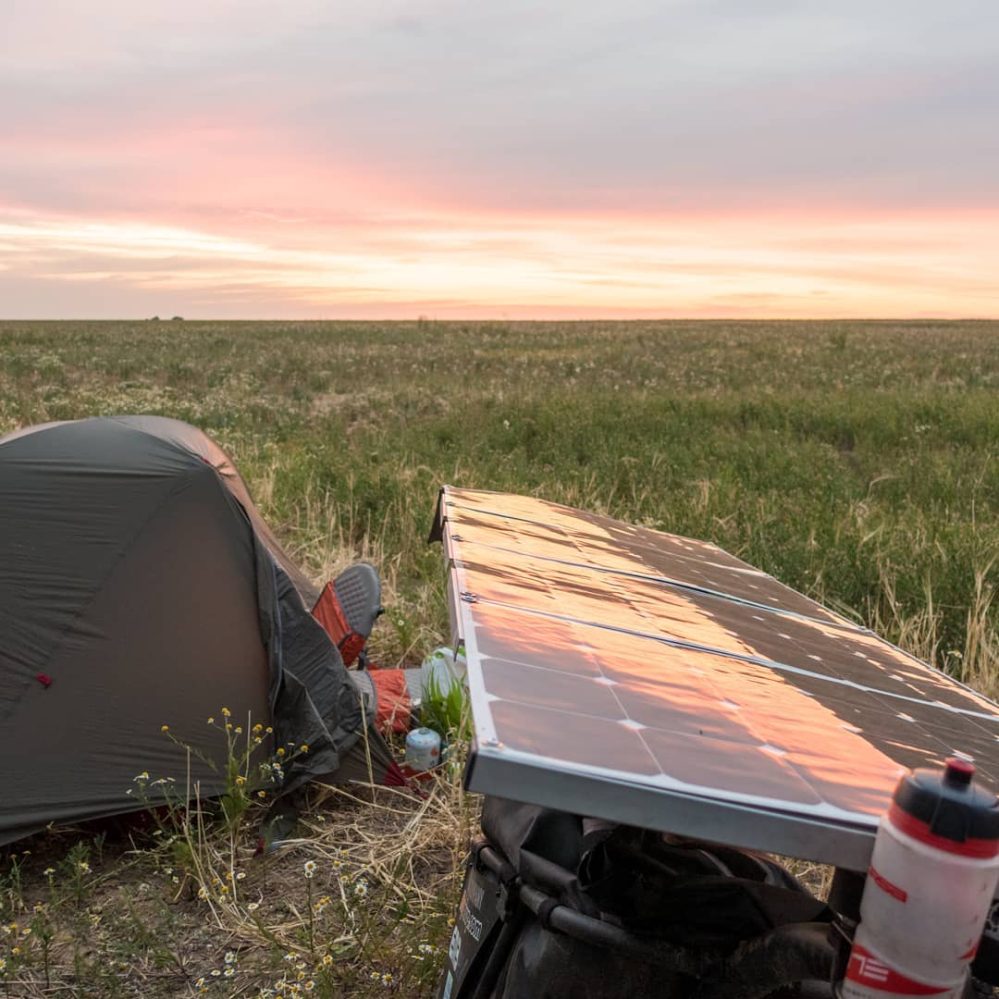 To smooth out the bumps in the road, Jack installed a Cane Creek Thudbuster long travel suspension seat post. He said he was extremely happy with the smooth ride it gave, especially considering around 1,000 km (600 mi) of the journey was over non-paved roads.

Jack used a Schwalbe Almotion tubeless tire up front, which he reported went without a puncture for the entire 12,800 trip. Not bad for a $60 tire!

We recently test rode a $10,000 Stromer ST5 at Interbike, which comes with custom Pirelli tires that supposedly still look like new after thousands of miles. But according to Jack, his Schwalbe Almotion held up nearly as well.

Jack started out with a cheap saddle, and quickly realized that wasn’t going to cut it. In pain, he pulled into the Velo Company bike shop in Munich to buy a nicer saddle. He chose a Brooks saddle, which is a very high-end leather saddle that a cyclist friend of mine once described to me somewhat crudely as “like suspension, but for your junk”.

The shop owner, like many other kind people Jack met along the way, took it upon himself to help the racer out. He gave Jack a 99% discount on the saddle, bringing the price down to €1.20.

Countless others along the long journey also went out of their way to help the rider, which Jack chronicled in his “People are awesome” posts on his journey’s Facebook page. He also documented his journey in several videos and vlogs, which you can find on Jack’s YouTube channel. 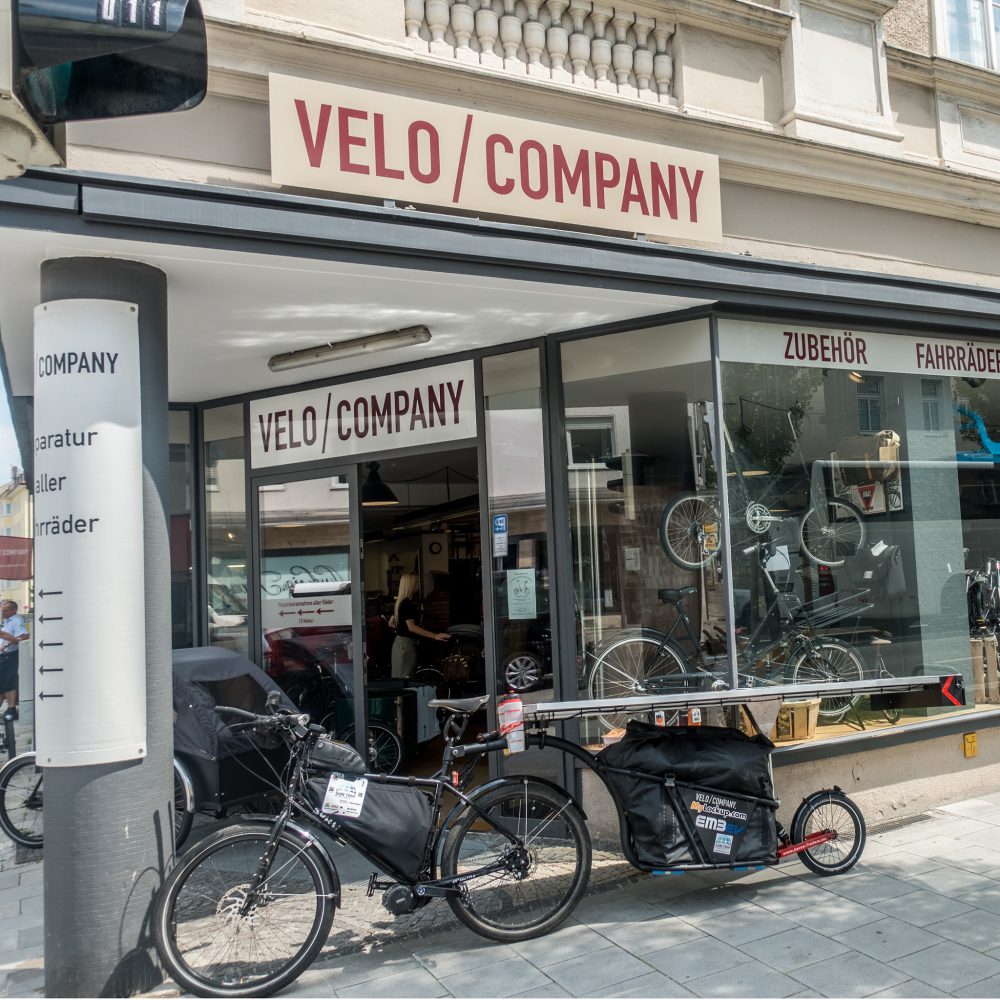 Jack completed the entire 12,800 km (7,950 mi) race in 64 days, crossing the finish line in sixth place. While Jack says he never intended to race competitively and was entering the event for the experience, he he did try to at least stay in the top ten riders.

Along the way, he had some incredible experiences.

At one point while crossing the Gobi Desert, Jack was caught in a windstorm so strong it ended up causing him to crash his bike before ultimately deciding to seek shelter. Fortunately, there was little damage and he was back on the road soon enough.

In Kazakhstan he was pulled over by the police, but got off with a simple exchange of instagram names and a selfie.

During a rest stop in Germany he was approached by an old woman, curious about his solar powered electric bicycle. He explained the race to her, as he had to many other curious onlookers before. She left after a few minutes, only to return shortly after with fresh baked bread for him to take on his journey.

Are you ready for your own solar powered electric bicycle trip?

A big part of Jack’s mission, as well as that of the Sun Trip, is to spread awareness of alternative transportation, including solar powered electric bicycles. But Jack also believes that anyone seeking to take part in a similar journey should plan carefully and check their expectations.

“For anyone that wants to do a similar solar powered electric bicycle trip I would advise them to decide why they are choosing to travel in this unique way. There are many types of e-bike users and people need to get their expectations right when moving away from the unlimited energy of charging at the wall. If you are intending to tour and want to be free of finding a place to charge but also want to not pedal much, usually someone would need a much larger area of solar than they first imagine. However if you do the maths and get your expectations in line, it is an incredibly free way to travel that is really unlike anything else!”

If you want to experience the Sun Trip but aren’t quite ready to ride a solar powered electric bicycle half way around the world, you may be in luck. Next year’s 2019 Sun Trip is a tour-style journey instead of a rally race. It will consist of a 1,200 km (750 mi) circuit around France, and should be a much more manageable way to try cycling with energy from the sun. 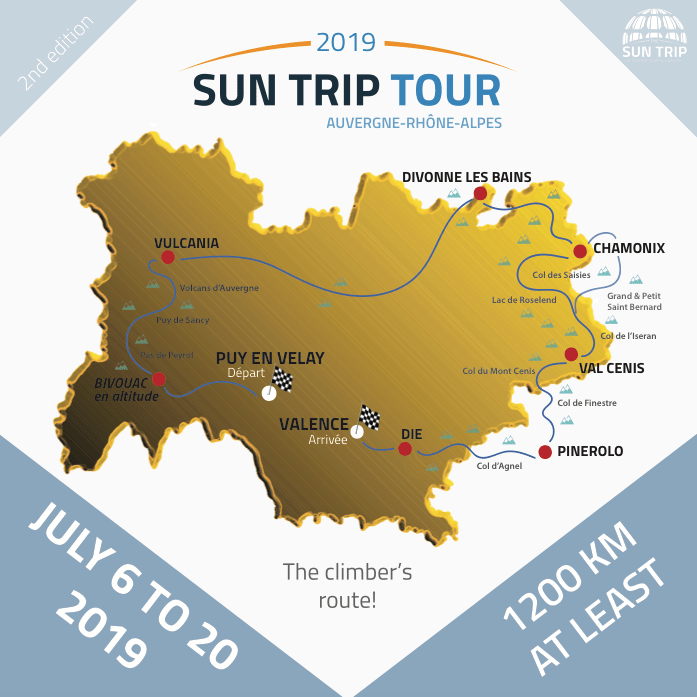 And there’s always solar powered electric car races as well, if you don’t fancy spending all day on a bicycle saddle.

What do you think about solar powered electric bicycles? Let us know in the comments below.