The easiest way to solar charge an electric bicycle (even at night!) 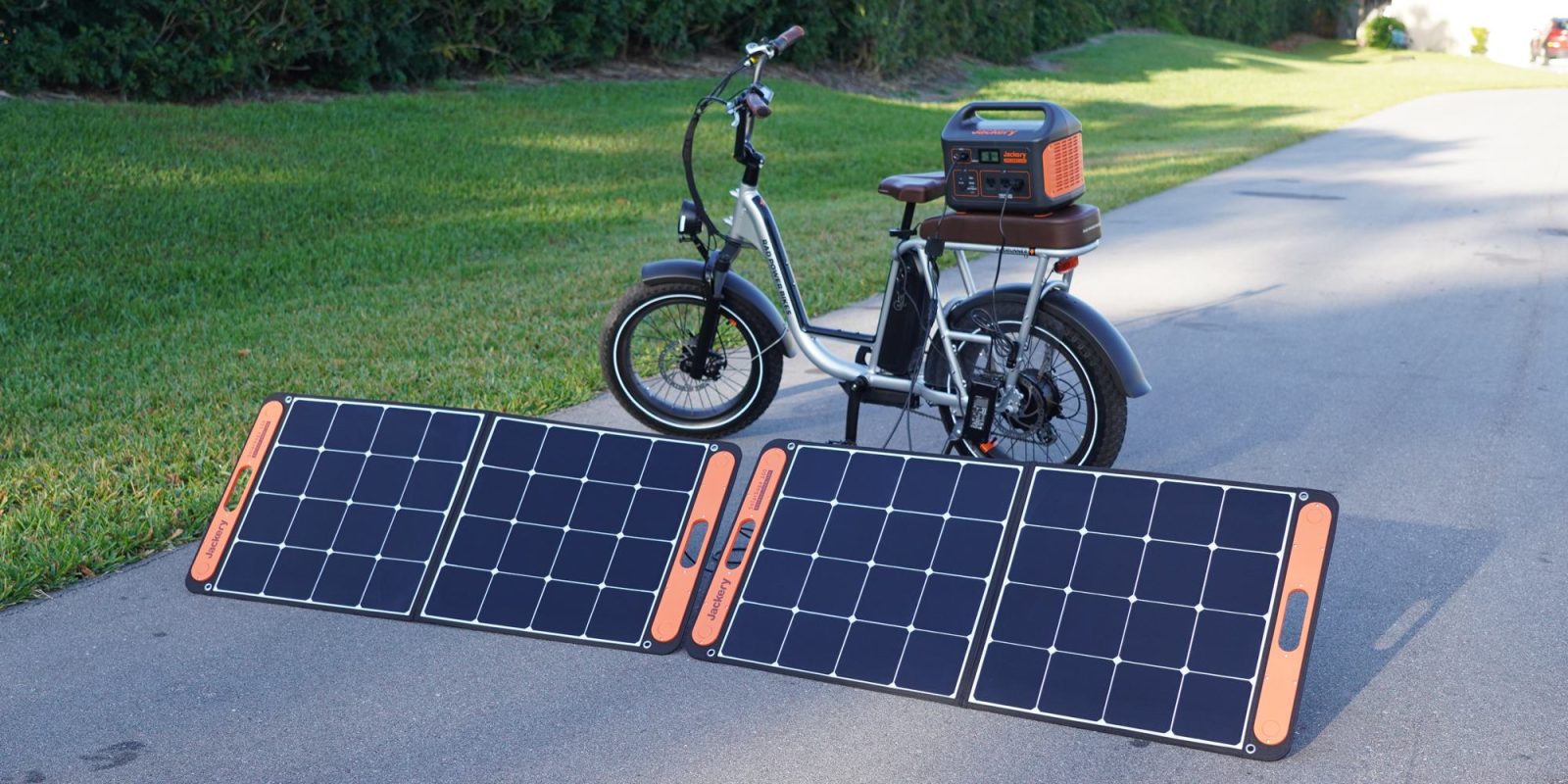 I’ve played with various methods for solar charging my e-bikes before. Some of them feel a bit more like a high school science fair project than the others.

But the single easiest method I’ve tried so far has been with the Jackery Explorer 1000 solar generator.

This is a big ol’ solar generator with a beefy 1,002 Wh internal battery that can be charged up with Jackery’s SolarSaga solar panels. You can also charge it from a wall plug or a car outlet, but it’s the solar charging that intrigued me.

Once it charges up its internal battery from the solar panels (or also during), you can plug in pretty much any device you’d like into it. In our case, we’ll be plugging in an e-bike charger that comes with an e-bike.

The Jackery Explorer 1000 has several power outlets in addition to the three 110V AC outlets, so you can get creative with what you run from your solar power. In addition to your e-bike, you can plug in other appliances or devices into the 110V AC outlets or the USB ports.

I often charge my phone from the unit just because its fun to think about how every call or swipe is powered by energy I harnessed from the sun.

To charge an e-bike, you’ll first need to make sure your Jackery unit is at least partially charged. Think of it like an energy buffer. You fill up the Jackery with solar power and it stores it until you’re ready to dump that energy into your e-bike.

You can take both the Jackery Explorer 1000 and the solar panels outside and simply point the panels towards the sun.

Or if you prefer a more permanent setup, you can leave the main unit inside and run the wires out through a window. This could be useful for anyone living in an apartment with a window facing the sun.

The panels are each 100W, though Jackery also makes 60W panels for smaller units they sell. You can use a single panel or connect two of them together for more power.

Jackery includes a helpful parallel connector for just such an occasion. For our use, a single panel is fine since we’ll be slowly charging the Jackery throughout the day, but two panels will charge the unit twice as fast.

With two 100W panels I can get 110W of input power during the worst of conditions (morning light, partly cloudy, etc) and over 150W in good conditions.

A typical e-bike battery is around 500-700 Wh. The Jackery Explorer 1000 has a capacity of 1,000 Wh and can thus perform around two full charges. Most people ride back with a partially discharged battery instead of a completely empty one, and so 3-4 partial charges is more likely.

The beauty of this system versus direct solar charging is that the solar energy is there when you need it. I usually ride my e-bikes during the day and charge at night. If I relied on direct solar charging, which pumps electricity straight from a panel and into the bike battery, then I’d never be able to charge after the sun goes down. But with the Jackery setup, I can easily solar charge when I get home, even after dark.

Now there is one big downside to this setup, and the more tech-minded readers will surely have landed on it already. This isn’t the most efficient way to solar charge a device. The two-step system of first solar-charging the Jackery and then charging the bike battery wastes some energy in each of the steps where energy transferred from battery to battery. The second step is even less efficient since you first convert to AC and then back to DC instead of staying in DC the entire time. It’s not as efficient as direct solar charging, but if you aren’t able to direct solar charge during the day then it doesn’t really matter.

And if you want to go even bigger, the Jackery Explore 1500 Wh unit is coming out within weeks. Michelle Lewis will have a hands-on review of that new beast of a unit right here on Electrek. So be sure to check back for our thoughts on the new massive unit based on her testing.