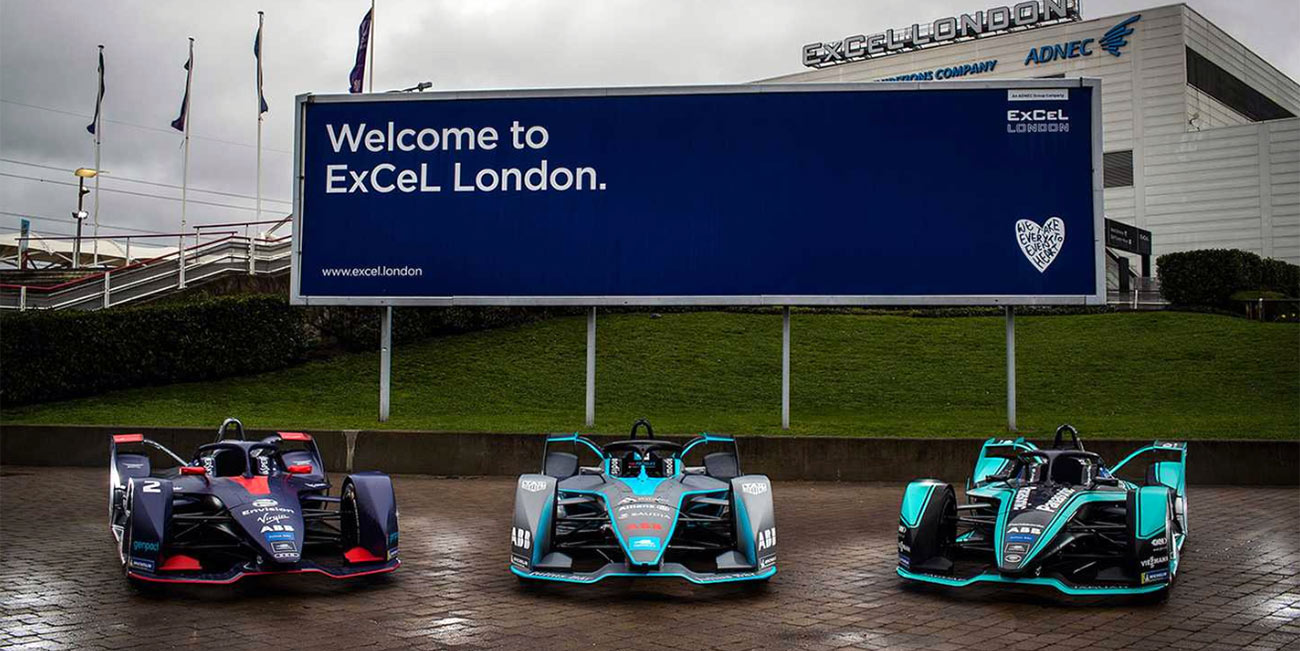 Formula E returns to London this weekend for another doubleheader, but at a new venue. This time, the race will be held in and around London’s ExCeL convention center in a unique track layout which Formula E says is the first indoor-outdoor race in motorsport history.

London has hosted Formula E before, but in a different venue. Previously, the London ePrix took place in Battersea Park near the center of London.

The plan had been to move to ExCeL center in the 2020 season, but when the COVID-19 pandemic hit, the race had to be cancelled (and the venue was turned into a makeshift hospital). The decision has been made to let the race go on this year (despite rapidly rising infections in the UK due to the delta variant), though the crowd will be limited to only 10% capacity.

We’ll get into a little Formula E news and a preview of what’s to come this weekend, but first a quick recap of what happened last time out in New York.

Despite the threat of rain from a huge storm that passed through New York in the previous days, we had clear skies for the doubleheader race weekend.

We had another somewhat traditional race weekend for both races in New York. Both races featured the close action and lots of passing that we have come to expect from this series, but without the crazy drama that sometimes comes along with.

Saturday’s race was dominated by Nick Cassidy and Jean-Eric Vergne who started in first and second place and held those positions for most of the race. They pulled away from the pack early on and nobody seemed to threaten either of them.

Cassidy started to fade near the end of the race, though, and Vergne tried to capitalize by passing in the hairpin. But both cars were forced wide during the battle, and Maximilian Gunther managed to capitalize and get past both of them, leaving Vergne in 2nd and Cassidy dropping to 4th behind Lucas di Grassi.

Another notable performance during the race was from Sam Bird, who started in 20th but finished 9th, scoring points and also setting the fastest lap of the race.

The story of this race was all about Bird, who started on pole and was never challenged by anyone all race. He sailed to victory and won by a mile – a full four seconds ahead of second place, which is an eternity in a Formula E race.

The rest of the podium presented a more interesting race. There was a good battle for second place between Mitch Evans and Cassidy, with Antonio Felix da Costa and the two Porsches close behind.

Evans and Cassidy fought hard through much of the race, and Evans was holding second place quite well. Eventually, though, in the process of defending from Cassidy, Evans went wide on an exit and hit the wall just a couple laps from the end. He took rear left suspension damage and was sliding all over the track, with little control of the car. He lost four places in a lap, but kept falling, and ended up finishing 13th place as the damage got worse and his car limped slowly across the finish line.

The main standouts for the whole weekend were Cassidy and Bird. Cassidy, a rookie, has had two very good race weekends in a row, putting him 5th in the championship and only 11 points behind leader Bird. Bird got himself into the championship lead with his win on Sunday, his third win in New York – the track seems to work well for him.

But the championship isn’t decided yet, there are just 13 points between the first six drivers, and the next nine or so drivers aren’t out of it yet either. Any of them could still mathematically become champion with four races left to go. We still have no idea who will finish the season in first place.

The teams’ championship is a little less contested, though. Virgin is in the lead, but Techeetah and Jaguar are only a few points behind. Audi, Mercedes and BMW are all close to each other, but some 30 points behind the leading pack, which is harder to make up. It’s still possible that they might catch up, but it looks like we know at this point which three teams will be on the podium – but we still don’t know what order they’ll finish in.

The biggest piece of news since our last article is the release of next year’s provisional calendar.

Several new tracks are proposed, and thankfully the season won’t be all doubleheaders as it has been this season. A doubleheader every once in a while is nice, but more track variety is welcome.

There are new tracks in Cape Town, Vancouver and Seoul. Seoul has been planned in the past, but was cancelled due to COVID.

We do have a doubleheader in Diriyah to start the season, and then the season ends with three back-to-back doubleheaders in New York, London and Seoul. The rest are single races in Mexico City, Rome, Monaco and Berlin.

There’s still a little uncertainty about the calendar, and we’re sure something will change (it always does). There’s one empty slot for race 9 in June with no venue announced yet, and a China race is planned in March though that has not yet been finalized.

We’ve also just learned that Jaguar has officially committed to the next generation of Formula E, meaning the team will remain on the grid through the 2025-2026 season. Now, the only manufacturer team left to formally commit is Mercedes, who have shown interest so far but haven’t made it official yet.

The London ePrix will take place at a completely unique venue in and around the ExCeL convention center in London. Part of the track will actually go inside the convention center, including the start-finish straight, pit lane, and several corners.

This will be the first motorsport race that has ever taken place in such an indoor-outdoor mixed venue. Formula E’s preview video has some shots from inside the arena as they’re building the track and pitlane:

The unique venue is possible due to Formula E’s status as a zero emissions race series. Typically it would not be a great idea to keep a crowd of people inside an arena where high performance vehicles were spewing exhaust due to safety concerns related to pollution (*hey wait, don’t a bunch of people live inside an atmosphere where a bunch of vehicles are spewing exhaust? we should maybe think about changing that…).

Further, the noise of performance engines would be even more troublesome when echoing around inside an arena, which is another environmental hazard that Formula E cars don’t have to deal with.

The transition between indoor and outdoor should provide multiple challenges for drivers. The driving surface changes from a specially-prepared indoor surface to a regular road surface outdoors, and the difference in lighting conditions can also be challenging when traveling at high speeds.

To add to all this, rain is forecast for the weekend, which means cars will be going from a wet to a dry surface and back again on every lap. Luckily, Formula E races on treaded tires rather than racing slicks, so the tires should be capable of handling both situations, but this should still add up to a difficult situation which will likely cause some amount of chaos.

Teams expect the new track to be relatively easy on energy use, which means racing will be mostly flat-out, with little energy saving necessary. Usually Formula E cars need to do a certain amount of energy saving to get to the end of the race, which adds an important strategic element to the race, and benefits drivers who are able to drive a car more efficiently while still managing not to lose time.

One of the key strategies to save energy is “lift-and-coast,” where drivers recuperate a little bit of energy through regenerative braking at the end of a straight. While this reduces energy use, it also gives following cars an important passing opportunity if they go a little later on the brakes.

For this reason, teams are worried that passing might be harder on the new track. Even though the track layout offers several passing opportunities, we might see less overtaking here than usual given the abundance of energy that teams expect to have.

Energy allowances were reduced to 48kWh for this race in order to mitigate this issue, but teams still think they will be flush with energy during the race.

We’re not sure how it will all work out, but between the indoor-outdoor nature of the race, forecasted rain and the unique energy situation here, whatever we get should at least be worth watching.