Formula E races at a New York doubleheader this weekend 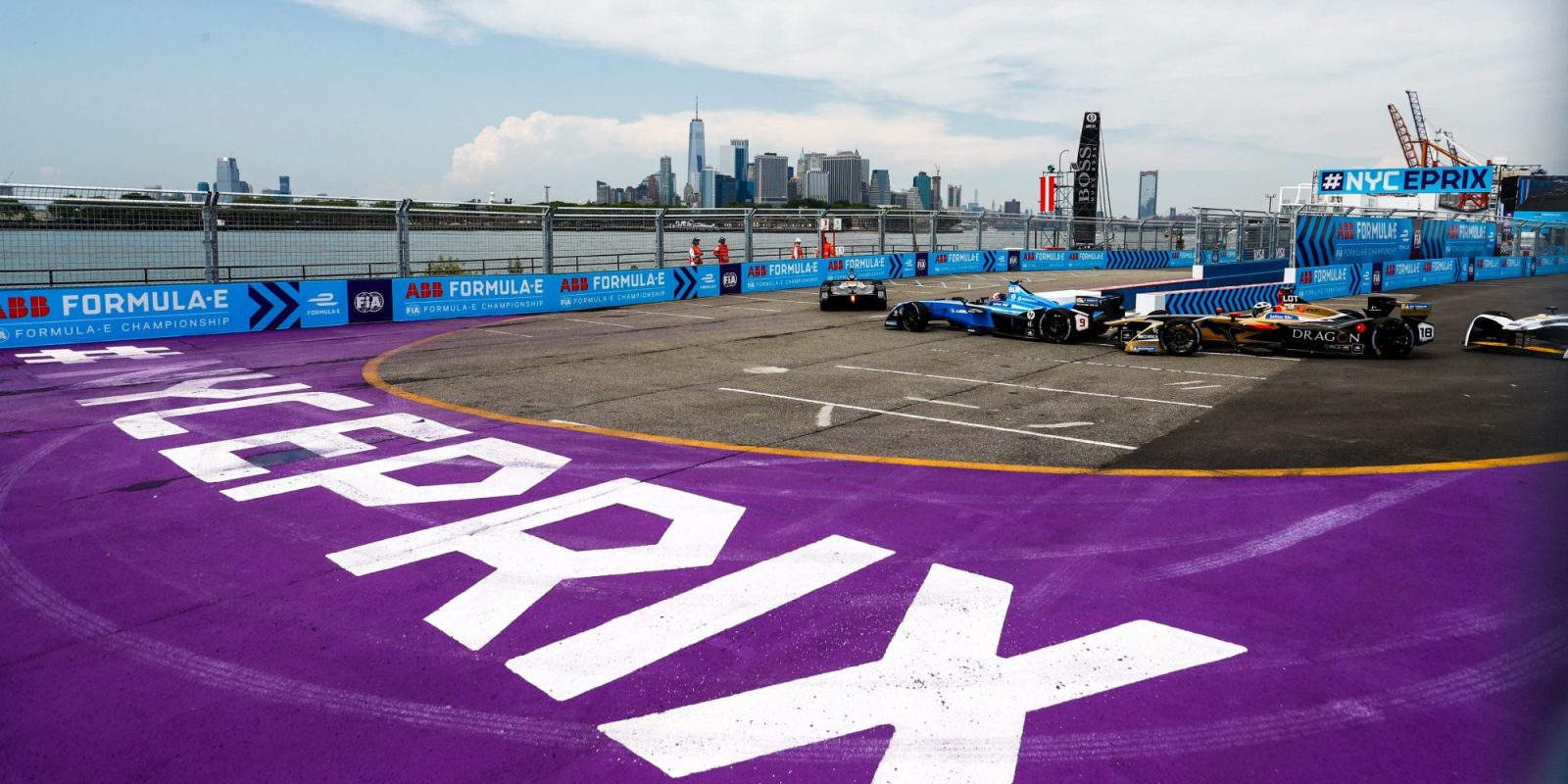 The Formula E season is starting to close down, with just three race weekends left in New York, London, and Berlin. This weekend, we return to the shadow of the Statue of Liberty for another doubleheader in Brooklyn.

We’ve raced at Brooklyn multiple times before, though last year’s race was canceled due to the COVID-19 pandemic. The track returns this year the same as ever, at the ferry terminal in the Red Hook neighborhood of Brooklyn.

We’ll talk about what to expect from the race and a little Formula E news since the last time out, but first a race recap of the Puebla ePrix in Mexico a few weeks ago.

The Puebla ePrix was the first time Formula E raced on an “oval track” – though the series only used part of the oval, instead of the full one. However, it had the feel of a “real racetrack,” rather than the downtown street circuits that are common in Formula E.

As a result, we got some “real racing” in Mexico. Formula E is known for relatively high levels of chaos during races, and the Mexico races had a little less than we normally see. On the one hand, that’s a bit less exciting, but on the other hand it has been nice to see a few races in a row with good, solid racing and a little less insanity than usual.

The “joker lap” attack mode activation zone – where drivers had to drive on a whole different portion of track to activate attack mode, losing much more time than usual (about 4 seconds) – added a lot of pressure to get the strategy right.

Despite concerns that the oval section of the track might result in high energy use and more necessity to manage energy consumption, this seems to have been offset by the track’s high elevation. Higher elevation tracks have thinner air, which results in less drag and higher energy efficiency. It also negatively affects downforce and combustion efficiency, but since Formula E is a low downforce series and doesn’t need air for combustion, the high altitude only really helped the cars.

As for results, a few drivers had standout weekends. We don’t often see race weekends dominated by individual drivers, because Formula E’s qualifying format means that drivers who are ahead in the standings get worse qualifying berths. In particular, Pascal Wehrlein seemed unstoppable this weekend, though Oliver Rowland and Eduardo Mortara were hot on his heels.

In the Saturday race, Wehrlein controlled the race from the start, and nobody could touch him. He was often ahead by several seconds, which is a rare margin for Formula E and especially for a partial oval track. He even crossed the line first – and was immediately penalized after the race due to a clerical error by Porsche. Both the Porsche and Nissan teams failed to properly declare their tires, which disqualified them from the race. This allowed Lucas di Grassi to inherit the win.

Interestingly, this isn’t the first time Wehrlein has been leading in Mexico and di Grassi ended up winning due to a penalty. The last time was in 2019 when Wehrlein was given a 5 second penalty for cutting a chicane on the final lap. Rene Rast and Mortara rounded out the podium.

On Sunday, Wehrlein was once again quick, but Rowland was quicker. He controlled the race early, though Mortara passed him midway through the race. From then on, Mortara was untouchable. A bit more chaos happened in the back of the pack during this race, with lots of cars having issues all on their own. Tire wear was a concern going into this race, so possibly the fact that Sunday was a warmer day resulted in greater tire wear and cars just couldn’t keep up with the traction. In the end Mortara won, with Wehrlein just behind…and then Wehrlein was penalized, again, with a 5 second penalty for improper fanboost usage. Nick Cassidy and Rowland filled out the podium, capping off a fast weekend for each of them.

Overall, these races felt perhaps a little more “mature” than many Formula E races have in the past. Except for the headline-grabbing double penalties for Wehrlein on a weekend where he really proved his speed (but Porsche proved their disorganization), the races were mostly just good traditional racing.

We’ve had relatively little Formula E news of note since the last race, but one item is that Lucid Motors is reportedly considering fielding a team. Lucid, through their technology division Atieva, supplies the battery for the current Gen2 Formula E car. We don’t know the details of how they might enter the series, but they do at least seem interested.

We also heard about a change to the upcoming London ePrix circuit at ExCeL Arena, with a shortened layout and a few changed turns. The circuit will be a partial indoor-outdoor circuit, a first in motorsports. The first race there was planned for last year’s season but was canceled due to COVID. This race will still be COVID-affected – attendance will be strictly limited to 10% of original capacity, but the broadcast won’t be affected.

The New York track is a known quantity, and shouldn’t produce significant surprises. Teams will likely know how to manage energy, and they’ve raced in tough conditions (high heat) here before. Currently, rain is forecast in the next day or two, but it’s supposed to clear up by the weekend.

New York does produce spectacular views, right on the water and across the bay from the Statue of Liberty, Governors Island, and the Manhattan skyline. It’s a very nice track to look at — while zoomed out. When looking at the track itself, it looks like, well, a ferry terminal with a temporary track set up in it. It’s on the docks, but these are not the same type of docks you see in Monaco.

While the look of the track itself and the track layout are relatively boring, with lots of straights followed by 90-degree corners or chicanes, this type of track design does give a lot of passing opportunities. So you can expect Formula E to be Formula E and offer a race with a lot of action, a lot of changes in position, and probably a little more chaos than the last couple races which have happened on more traditional tracks.

As far as the championship is concerned, we have 9 races down and 6 to go, so the season is starting to “wind down” in a sense. But a lot can still happen – despite only 3 weekends left, with 2 races per weekend and close championship standings, we still really have no clue who to look out for as a potential champion this year.

The Dutchmen, Robin Frijns and Nyck de Vries, started strong but have had some worse results lately. Mortara has been doing better than ever, and currently tops the championship after his excellent weekend in Mexico. Antonio Felix da Costa is always a consideration, and has been very fast this season, and is currently third in the championship. Mitch Evans has always been an upper-middle pack driver but has been putting in consistent results this season and is certainly a factor.

But honestly, everyone is close enough to the top of the championship that anything could happen. There are 12 drivers within one race win (25 points) of the lead.

The teams’ championship is a little more clear, with Mercedes, Techeetah and Jaguar at the top all within just 4 points of the lead. Mercedes and Techeetah are no surprise, both teams having done well last season, and Techeetah being a top team for several years straight. Jaguar, however, has moved from a mid-pack team to a top team this season; they’re doing quite well.

Audi and Virgin are a factor as well, each 10 points behind Jaguar. Other teams could catch up with a string of good luck, but we aren’t surprised to see the teams championship shaping up like it is.

Finally, one neat thing to expect this weekend is an in-person crowd. There were questions over whether tickets would be available at all, and finally a limited number of tickets were made available for this weekend’s event. Since New York is doing very well on COVID vaccinations, it seems that an outdoor event has been deemed safe.

There will be two races this weekend, with Sunday’s race three hours earlier than Saturday’s. Saturday’s race starts at 1:30 p.m. PDT/4:30 p.m. EDT/8:30 p.m. UTC. Sunday’s race starts at 10:30 a.m. PDT/1:30 p.m. EDT/5:30 p.m. UTC. Saturday’s race will be aired on CBS Sports Network in the US and Sunday’s race will be on the CBS main channel, or if you’re elsewhere, head over to Formula E’s website to find out how to watch the race in your country. Unfortunately, Formula E will no longer upload races to their YouTube channel, though you should be able to find highlights there some time after the race.