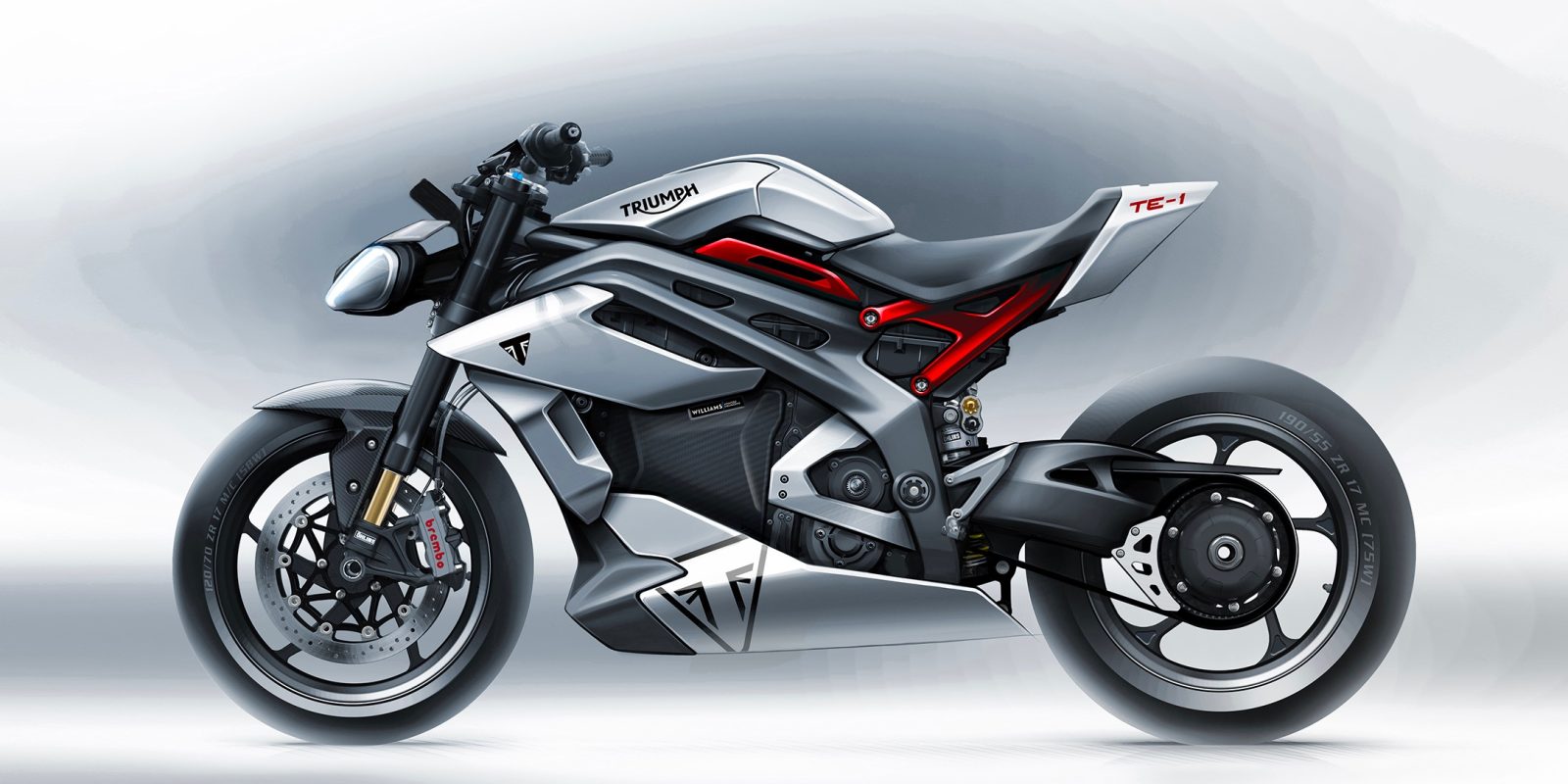 Triumph has continued slowly clawing its way forward on the development of an electric motorcycle platform known as the TE-1.

It began way back in February of 2019, when the company started polling its customers on their interest in electric motorcycles.

Of course the UK-based motorcycle manufacturer was already behind the times, as studies have shown over 50% of riders are considering switching to electric motorcycles. Young riders are leading the wave of motorcycle electrification.

Better late than never, Triumph began making progress on its own electric motorcycle project, known as the Triumph TE-1.

Now we’re getting our first look at the concept electric motorcycle as the company shares more details on the project.

The project is apparently a large partnership with Triumph playing one of several shared roles in the development process.

The motorcycle manufacturer has been joined by Williams Advanced Engineering (WAE) to help develop the battery for the electric motorcycle, while Integral Powertrain LTD is developing the motor and controller, WMG at the University of Warwick is handling computer simulation to validate the bike’s performance specifications, meanwhile funding is being provided by the UK government via the Department for Business, Energy, and Industrial Strategy (BEIS) and the Office for Zero Emissions Vehicles (OZEV).

The partnership has now reached what Triumph is calling Phase 2, which involves the disclosure of the new powertrain developed for the electric motorcycle platform.

The first component unveiled is the battery pack, which was developed by Williams Advanced Engineering (WAE). Triumph claims that the new battery will be more energy dense than competitors, offering more power across a wider voltage range with a reduced weight penalty.

“We are delighted to be working on this project, working to deliver next-generation battery technology and control systems. Within the current landscape, most electric motorcycle technology arguably delivers compromised performance at low levels of battery charge. By using a lightweight, compact solution we have been able to give the rider all of the performance all of the time (regardless of battery charge), and a class leading range. We have focussed on pushing the boundaries to reduce mass and optimize frame position to benefit handling. We have also pushed the limits of battery performance, balancing the design for acceleration and range, with simulations modeled on track-based riding. In other words, as aggressive as possible.”

The partnership is also showing off the new 130 kW (174 hp) motor and controller design.

The two components have been integrated together, with the group claiming that the close integration reduces the weight of copper wires transferring power between the two components.

“One of the most influential factors in how well a motorcycle handles and performs is mass, so at Integral Powertrain we have focused heavily on making a step change in motor and inverter design, removing heavy high voltage cables for example. This delivers a product that is significantly more compact and lighter than anything currently available on the market. The motor produces 130 kW or almost 180 horsepower, but weighs only 10 kilograms, much lighter than existing technology and clearly a small fraction of the mass of traditional internal combustion engines.”

Cross indicated that the motor design is also scalable, meaning the company could produce a number of variations with different power levels based on the same platform.

With this many cooks in the kitchen, a key component of the project is systems validation through computer simulation.

This falls on WMG at the University of Warwick, as Assistant Professor of Energy Management and Control Systems Truong Quang Dinh explained:

“Our creation of initial computer-based simulation models at the start of Phase 1 has been instrumental in ensuring that the component selection was appropriate to achieve the performance targets defined by the partners for the TE-1 Prototype. We have continued with this work across Phase 2 of the project, refining the models to a much more complex level to allow us and the partners to imitate further components on the bike such as braking, throttle, lighting and other systems and mimic real-world riding to provide development opportunities before components were fully designed. Additionally we have created a physical rig wired with all of the control units, in order to implement a design validation test program to ensure the function of each section was within the allowable range.”

At this stage, there is still no indication that these components will make it onto a retail motorcycle or that such a motorcycle will adopt the design seen in Triumph’s concept art.

It’s great to see Triumph making progress, even this late in the game.

Though with this many different industry partners, you’d think we were looking at another Apollo project here.

I applaud the collaboration, but if anything this would have led me to expect more progress by now. With separate expert teams producing the batteries and the drivetrain (arguably the only key systems that differentiate an electric motorcycle from a gas motorcycle), why has it taken Triumph two years to show us parts on a bench alongside concept design artwork?

So as happy as I am to see Triumph inching forward, let’s talk again when they’ve got a bike to show us.