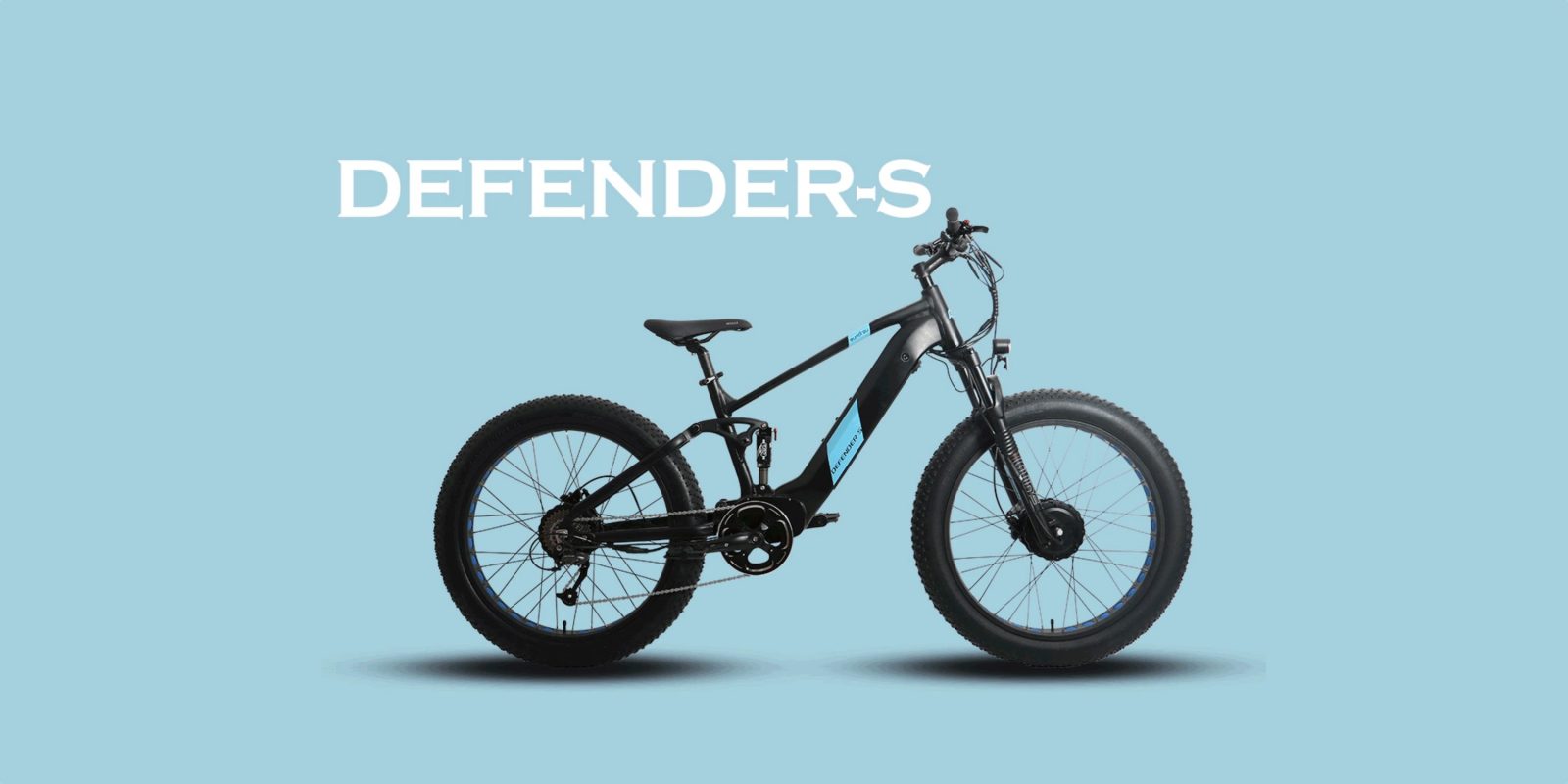 EUNORAU has just launched its latest electric bike – this time opting for full-suspension combined with all-wheel-drive. The new EUNORAU Defender S e-bike also happens to be one of the most affordable full-suspension AWD e-bikes on the market.

They otherwise carry the same specs. A 48V 14Ah removable battery is integrated into the downtube.

That 672 Wh battery can be upgraded to an 816 Wh battery, and riders can also add on a second 816 Wh battery that gets mounted piggyback-style on the first, doubling the e-bike’s range to a maximum of 80 miles (130 km).

That range will likely drop with off-road riding, which is known to burn through batteries much quicker, but suffice it to say that 1,632 Wh is a lot of battery!

An RST hydraulic front fork and rear DNM air shock combine with the high-volume fat tires to give this e-bike a comfortable ride both on and off-road.

That 9-speed transmission is a step up in quality compared to the entry level Shimano Tourney and Altus parts we often seen on these lower-cost e-bikes.

While $1,999 certainly isn’t pocket change, many full-suspension AWD e-bikes cost twice as much, making this a bargain by comparison. And don’t get even me started on those $6,000 full-suspension fat-tire e-bikes.

The EUNORAU Defender S also comes in two frame sizes to fit a wider variety of riders, though the smaller frame size can’t fit the larger 816 Wh internal battery upgrade. It can still fit the 816 Wh piggyback battery, for a maximum combined capacity of 1,488 Wh. Not too shabby.

Racks and fenders can be added as additional accessories, as well as a fast charger that increases charging rate by 50%.

The company is currently taking pre-orders over the next 30 days for the EUNORAU Defender S.

Once funding is completed via the company’s Indiegogo campaign, production is expected to begin in May with shipping slated for October.

We always advise that buyers exercise some level of caution with Indiegogo campaigns, as you are actually backing a campaign for a product that hasn’t entered production yet. However, we’ve reviewed EUNORAU e-bikes before, and the company has been building e-bikes for nearly a decade, so this isn’t some fly-by-night startup.

EUNORAU is another example of an Asian e-bike company with global operations and that is working hard at building a base of operations in the US. The company has recently established a Las Vegas headquarters, and also has facilities in both Europe and Australia. EUNORAU isn’t just some nameless drop-shipper.

Judging purely by the images, videos, and specs, I’m actually quite impressed with the bike. For $1,999, you’re getting a lot of e-bike! And not just that, you’re actually getting good components as well. That suspension isn’t top-shelf, but it’s not the cheap spring suspension we often see either. Those hydraulic disc brakes are quality and so is that mid-tier Shimano transmission.

Basically, EUNORAU actually invested in some fairly rugged components on this e-bike; they didn’t just slap two motors and cheap components onto a frame to achieve a low MSRP. This is a low-cost e-bike in name only.

It’s a bummer to have to wait until October to get to actually ride the EUNORAU Defender S, but the e-bike industry is currently suffering from crippling supply chain delays following surging demand, and so the wait time makes sense based on the current environment.