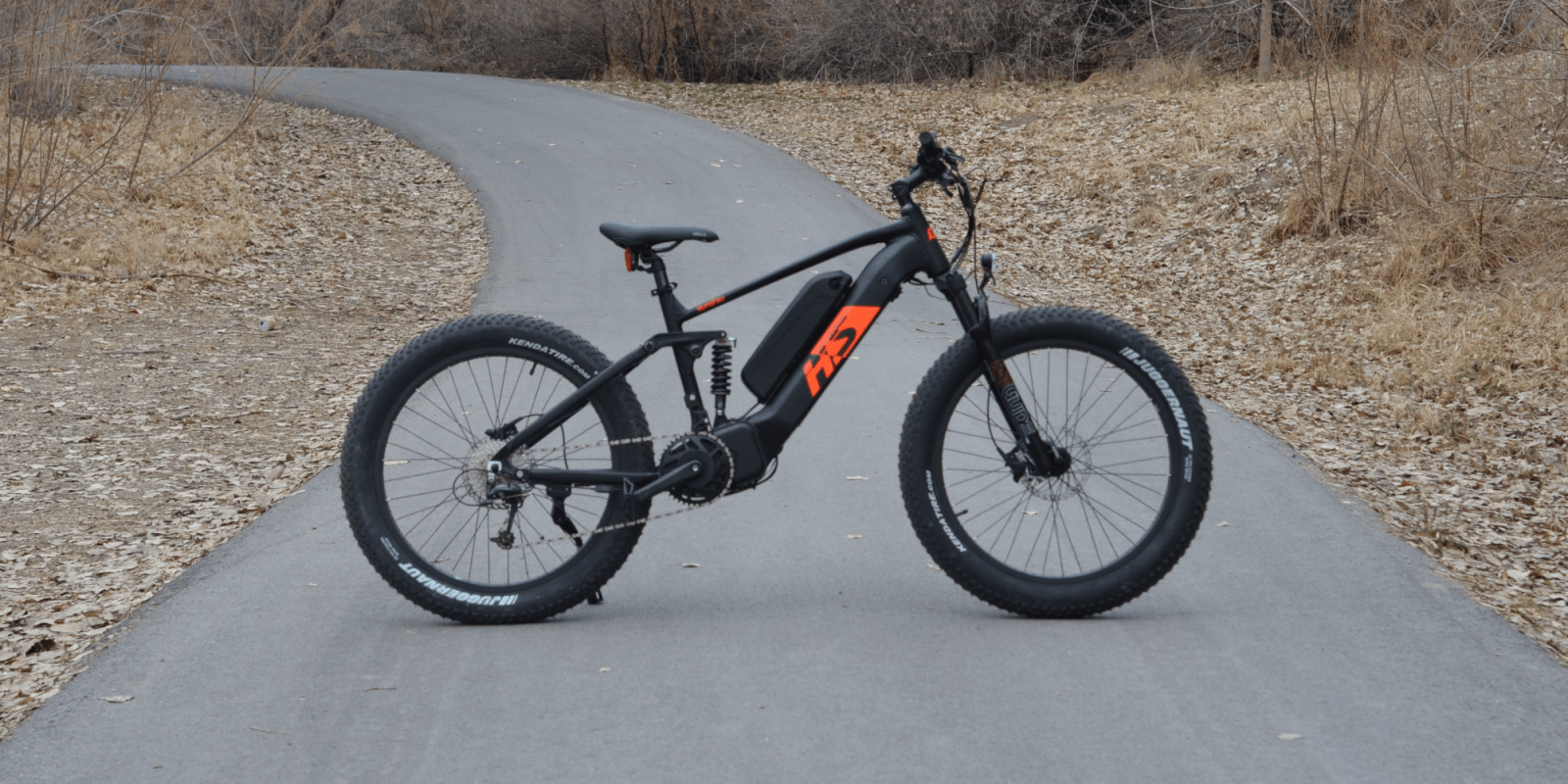 EUNORAU is staking their claim of the American wilderness, with the release of their updated FAT-HS bike. With dual suspension, dual batteries, and an overpowered mid-drive motor, the bike is perfectly capable of carrying staunch adventurers back to nature. If you ever wanted to get out on single track trails, this wouldn’t be the bike to do it. But for fire roads and even commuting to the trail, you’re in the right place with this beastly heavy bike. Check out the video below, where you can see a day’s adventure on the FAT-HS.

FAT-HS as an adventure bike

This is really where the FAT-HS shines. The dual suspension makes riding off-road much more comfortable, but also offers a lot better control of the terrain with a decent spring suspension and four pivot design in the rear. The suspension system isn’t going to win any awards for innovation, but it’s adequate for the girth of the bike and mild to moderate off-road trails. Fire roads were amazing on this bike, as it could pick up some speed, spread out across the gravel, and even jump some potholes going up hill. When I took the bike on single track trails, I started to see the limitation, based solely on size. Rocking 2 batteries, the bike weighs almost 80 lbs. Riding the FAT-HS up a slender path is going to feel like threading a needle with spaghetti. Riding down hill is going to feel like being in a bar fight. With the right path, you’d feel right at home taking the FAT-HS to a distant campground usually accessible from four-wheelers and Wranglers. Just be sure you pack light, because…

FAT-HS as a commuter bike

Justifying the FAT-HS as a commuter bike is going to require some stretching. The bike does have an integrated front light, and a separate red tail light. But the business stops there. The rear triangle is compatible with some kind of rear rack, but I couldn’t find one on Amazon that fit. Full-size fenders would have a hard time mounting on the rear, since the tire tolerance is pretty tight, but universal ones would work just fine. Aside from the accessories, commuting on the FAT-HS would be difficult, since the bike would beckon you to jump it off into the trail somewhere, making you very happy, and very late. You’d totally crush that commute though.

FAT-HS as a range champion

In my case in Salt Lake City, I could commute about 10 miles to the trail, bike for about 10 miles in the thickets, and make it back home using full throttle all the way. Any other bike I’ve aimed at taking on those trails required planning, shuttling, or downright non-electric pedaling to ensure I could make the whole trek. Maximum range is stated as 80 miles, but with a 30mph top speed and a highly tempting throttle, I know I wouldn’t see 80 miles in a day. Come to think of it, I don’t want to be on a bike seat that long.

FAT-HS as a comfort bike

Comfort could be a big attraction for this bike. The fat tires and dual suspension make for a plush ride on the street or trail. Unfortunately, the seat and stiff seat-post are aiming for adventure. With a touch of customization, (changing the seat and maybe the seat-post), the bike would be comically soft. Some folks have medical or rehabilitation concerns that a stiff bike simply can’t address, and if you’re concerned about getting too far without enough battery to come home again, then you might be in the right place.

FAT-HS as a, um… okay, time to nitpick

I wish this bike had a torque sensor instead of the cadence pedal assist. This is a feature that turns on the bike as you pedal. The cadence pedal assist feels like a throttle activated by your feet, doling out power based on pedal spinning speed. A nice torque-based system feels much more natural and rewarding, doling out power evenly compared to the amount of force your feet apply to the pedals. With this heavy of a bike, I would have preferred a torque system for stop lights on the road, and sudden stops when keeping track off-road. I realize it’s extra cost, and I wound up using the throttle most of the time anyway. I don’t particularly like the display and control pad. The display is quite large compared to the limited information it shows you. In contrast, the control pad for the display is strangely small, and the small, square buttons feel like they were taken from a Blackberry phone.

FAT-HS has battery positives and negatives

Waka Waka Waka! I dig the internal battery mount. I’ve seen various internal battery systems with varying user-friendliness. Even the likes of Haibike and Yamaha had trouble. Making a battery fit snug in the bike, be easily accessible, look decent, and have a usable capacity is a tall order. The Nireeka bike also missed the mark on internal battery ease-of-use. EUNORAU got it right on the FAT-HS. The internal battery is tight, easy to take in and out, looks good, has a great protection plate, and a decent capacity of 48v and 14Ah. The optional, external battery hit a bit of a snag. The secondary battery uses a common Hailong mount, found on all sorts of bikes. In the case of the FAT-HS, a little bit of DIY was in order to get the perfect fit. I covered this part in the video, so I’ll refer you to the 7:00 mark where I go over the fix.

I like the FAT-HS as a back-country adventure bike on larger, longer trails. For the sheer equipment on this bike, the price is pretty competitive at $3,199 as you saw in the video. As a daily driver, I think I would prefer something a bit more conventional, but if you want to turn heads to showboat a little bit, then this bike is sure to get some attention.