Indications point to a lightweight Honda electric motorcycle on the way 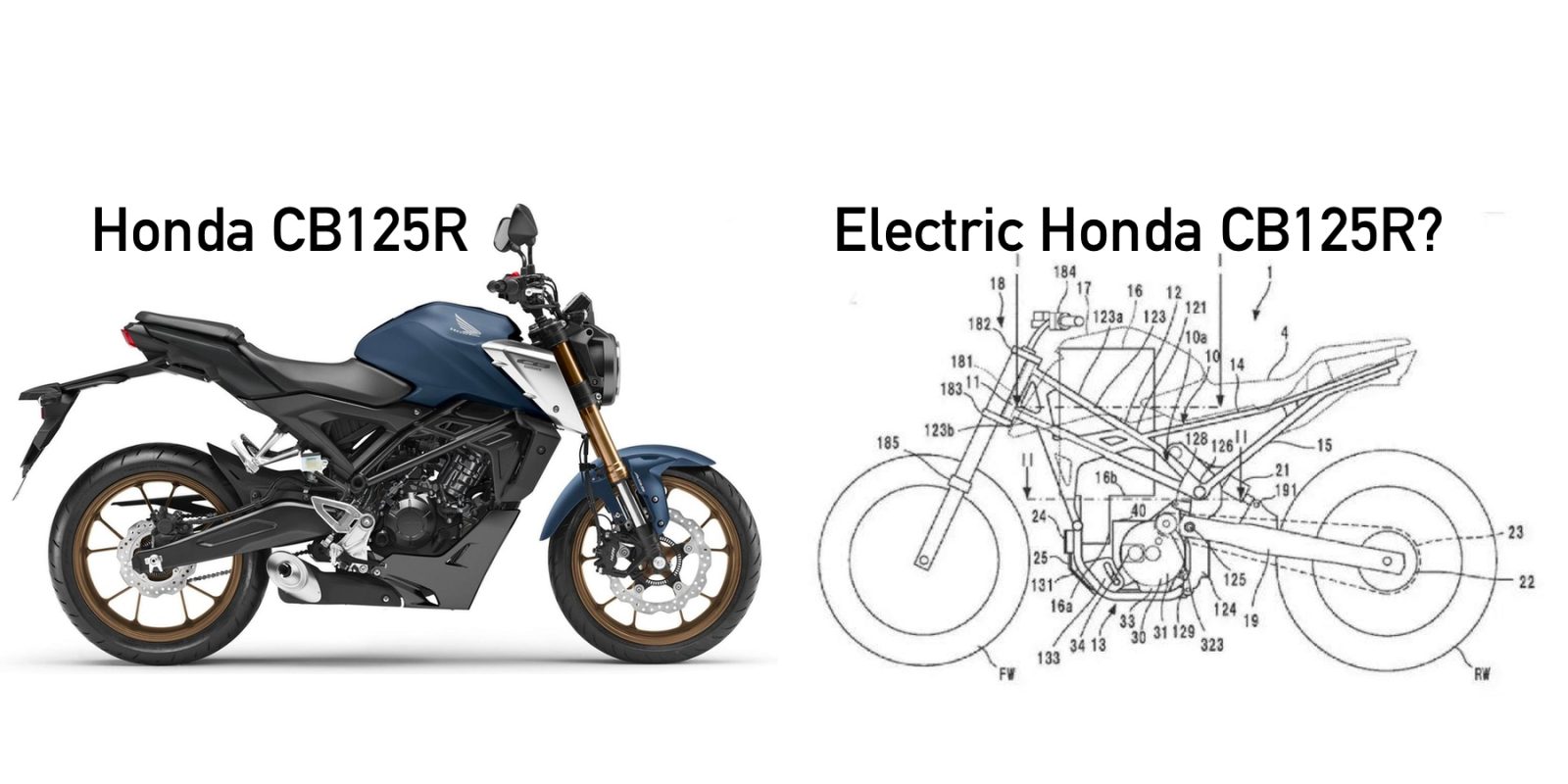 Last year we broke the news on Honda’s electric motorcycle ambitions based on its existing CB125R bike when the first details came to light.

The CB125R is a small-displacement 60-ish mph learner bike that was introduced in 2018. It is popular among new riders due to its ease of use and low power compared to much larger displacement bikes.

In new patent images we are getting a better look at details surrounding the motor and battery setup.

The shoulder vents, which are non-functional on the existing CB125R, appear to have been opened up to allow ram air cooling of the battery pack in the electric version of the bike.

The new patent images also show the battery placement being fairly high in the frame, essentially taking up much of the space previously held by the gas tank.

Honda had previously joined a consortium with Yamaha, Suzuki and Kawasaki to develop and test a new standard for electric motorcycle swappable batteries. There is not indication yet whether this electric CB125R design would incorporate such batteries.

Conventional body panels seem to do a good job of hiding the battery and electronics, preserving the look of the CB125R.

We’re also getting a better look at the motor now, showing its final chain drive sprocket. Most electric motorcycles have moved to belt drives by now, which is almost necessitated by the nearly silent drivetrain. Without a loud engine and exhaust, chain noise can be unpleasant on an electric motorcycle.

But Honda appears to be sticking with its chains, at least for now.

While the patent images give us a more detailed look at the bike’s design, we still don’t have any information about when the new bike could be rolling out.

But even without timeline specifics, it’s good news to see Honda continuing to make progress on its electric bike.

First of all, it’s great to see Honda continuing to make progress on this bike. Targeting a market similar to the CB125R market is a great move, as electric motorcycles are starting to welcome in a whole new era of beginner motorcycle riders, and a small bike like this can be a perfect start.

We of course don’t have any performance figures yet, but VisorDown speculates that we could see an 11 kW motor and speeds in the 75-80 mph (120-130 km/h) window. That would be fairly easy to achieve with a bike of this setup. And it could rival other newcomers to this category, such as the SONDORS Metacycle.

That said, the design choices kind of baffle me here. I can’t understand why Honda would place the batteries so high. The elevated center of gravity will affect how the bike leans, creating an artificially heavier feeling ride.

The only explanation I can think of is that it is easier to hide the pack from view up there, allowing Honda to stick with the traditional lines of the CB125R and not have to “design around the battery” like most major electric motorcycles have done. Bikes like the Harley-Davidson LiveWire and Zero SR/F each feature large, high capacity batteries that necessitated thoughtful design – something both companies have achieved, in my opinion.

But I think Honda is trying to avoid that complexity by just putting the battery pack anywhere it can be hidden, which basically requires a fuel-tank level battery location. It’s not optimal for handling, but it does simplify design.

The chain drive is also a bit of a bummer to me, but I wonder if Honda has made a different calculation than the rest of the electric motorcycle industry. Instead of trying to reduce noise, I wonder if they are trying to retain it? Perhaps they like the chain noise and don’t want to embrace the idea of a nearly silent motorcycle. Maybe they even want to use it as a unique selling point or as a way to ease gas riders more gently through the transition to electric, leaving them a little noise for familiarity.

I don’t know, but some of these choices just don’t add up for me. Even so, I’m willing to look the other way if it means we’ll FINALLY get a Honda electric motorcycle on the road.