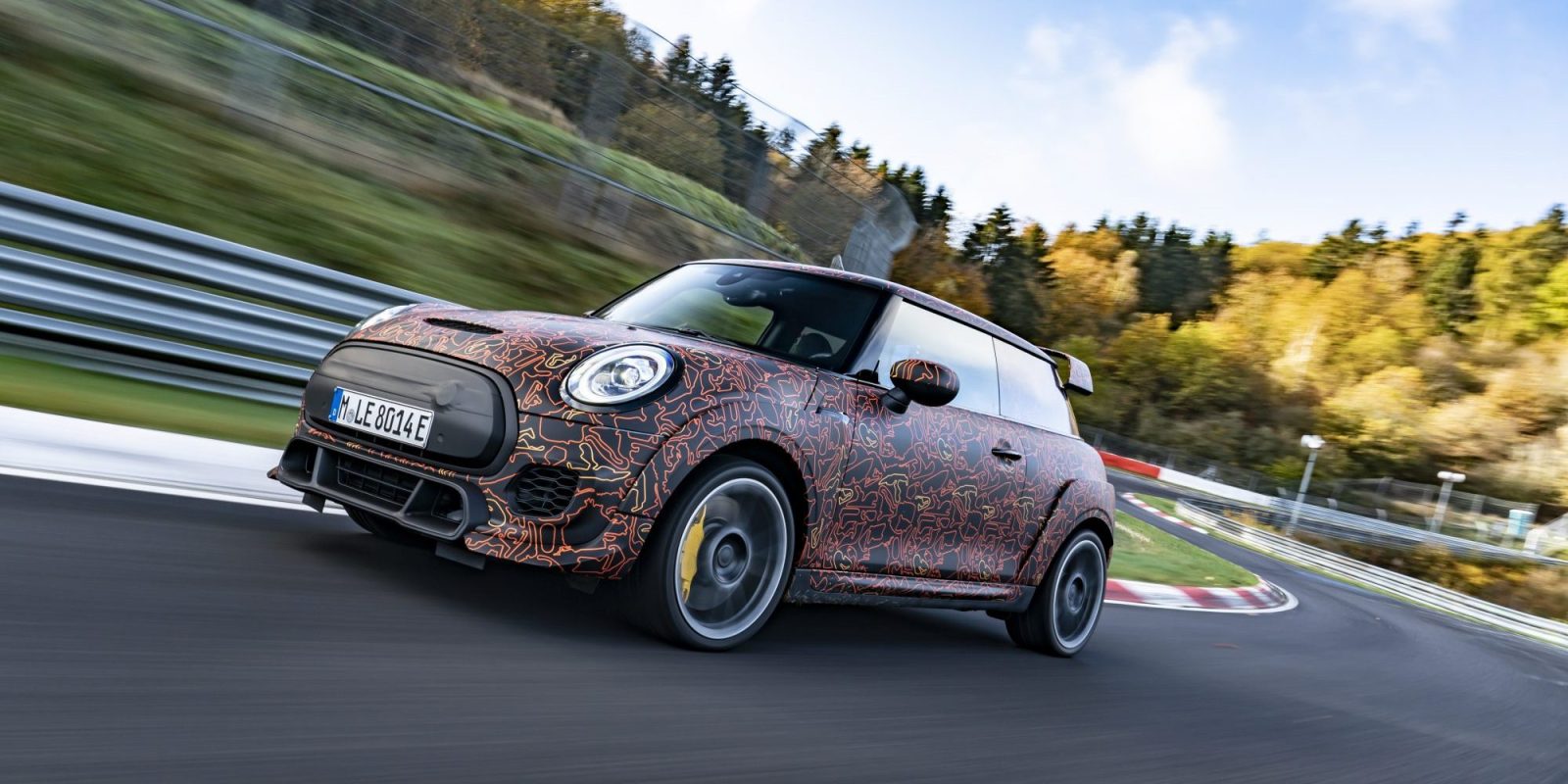 Last month we reported on rumors that BMW had greenlit development of a high-performance “GP” version of the electric Mini. Today BMW announced that the car is indeed being worked on, but it will be designated as a “John Cooper Works” model, a name reserved for the brand’s highest-performance, track-ready vehicles.

We didn’t get any specific information, other than the fact that it’s being made. We don’t know when it will come out or what performance improvements it will have. We didn’t even get a name — BMW may or may not use the “GP” designation to refer to this car. If they do, it could show that they intend for the electric version to be able to compete with their fastest gas Mini.

BMW did commit to continuing to build gas-powered John Cooper Works cars. The company came out with a refreshed “GP” model in 2020 with many performance improvements and a very aggressive look. That look has carried over onto the electric version, which looks like it carries the same spoiler, wheels, and fenders as the gas model, minus a few of the more aggressive air intakes.

To show off the new Mini Electric John Cooper Works prototype, BMW released several photos of the car driving around the famous Nürburgring race track, wearing a camouflage-like wrap festooned with track diagrams from famous racetracks around the world:

These graphics further show us that BMW intends this to be a track-focused model, improving performance beyond the fun runabout car the Mini Cooper SE is. The standard model may be fun, but with such a small battery, it likely wouldn’t last long on a track at all.

And Nürburgring is a long track, the longest racetrack in the world, clocking in at almost 13 miles for a lap (most tracks are around 3 miles long). If BMW is going to show us photos of the car on the Green Hell, then one would hope it would be able to conquer that track successfully.

The gas model John Cooper Works Mini has a Nürburgring time of “under 8 minutes” according to BMW, and it would be quite an accomplishment if the electric version were able to get anywhere near that time. For reference, a Model 3 Performance has lapped the track in about 9 minutes, but that was on a public track day, without a professional racing driver and wearing street tires. The Model S “Plaid” version set a time of about 7:20, but we wouldn’t expect a small electric hot hatch to compete on the same level as a luxury sportscar with over 1,000 horsepower.

What modifications will BMW bring?

This is where the speculation comes in. What modifications will BMW make to ensure the high-performance Mini can do at least a few hot laps in a row at peak performance? Track use is much more energy-intensive than normal use, and one track mile is usually equivalent to somewhere around four real-world miles in terms of energy consumption, for gas and electric cars alike.

This means the Mini Electric’s 110-mile range will start to look pretty anemic on a track, especially if it runs into battery temperature constraints by sustaining maximum energy draw from its 32kWh battery for a few laps. These have often been downfalls of electric cars in terms of track performance — you can usually only do a few hot laps before the car restricts your power.

But, realistically, a few hot laps is all most people will do. Generally weekend track sessions are 20 minutes at a time, with a big break in between to let temperatures come down, fix up anything you broke, or refuel your car. And gas track cars often won’t go out with a full tank anyway — the more fuel you’re dragging around, the heavier your vehicle is, which reduces your performance.

But battery size isn’t just about range, it’s about getting maximum power out of the battery. If BMW wants to maintain the same battery chemistry but get more power out of the pack, one way they can do so is by just adding more cells. Bigger batteries can generally supply more power at any given moment, so a bigger battery would make the car faster too, assuming it’s paired with a more powerful electric motor, which is an easy thing for BMW to upgrade.

The problem with this, though, is weight, the enemy of racing performance, as it means you have more ballast that the car needs to throw around when it accelerates, turns, and stops. So if BMW does add more battery weight, they might try to balance it out by adding weight reductions elsewhere on the vehicle, like lighter-weight body panels or seats.

There are also some obvious changes that we already see have carried over from the gas model — higher-performance wheels and brakes:

And a final, hopeful possibility that we’ve brought up before: the addition of a rear motor. Electric motors are relatively small and easy to bolt onto an axle, so BMW could make the Mini rear- or all-wheel drive.

This would improve track and 0-60 performance and wouldn’t cost a lot of weight, as electric motors are pretty light anyway. But Mini is a front-wheel-drive brand (Countryman notwithstanding), so breaking tradition and also giving the electric Mini an advantage over their top-end gas JCW GP would be quite a statement. Though it would be a statement we’d love to see them make…