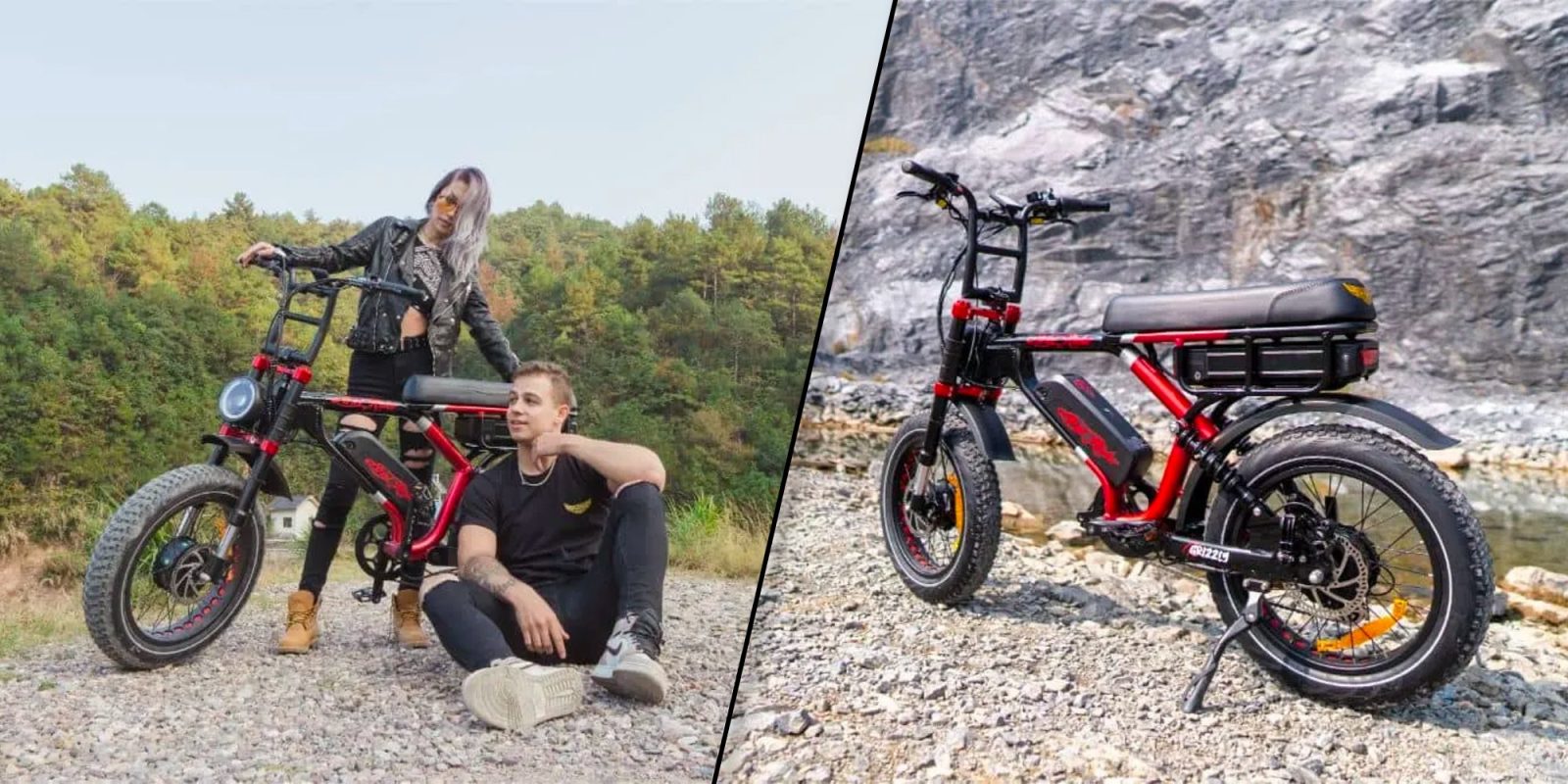 Ariel Rider has a wide range of electric bikes from simple folding e-bikes to cargo e-bikes and commuter e-bikes. But some of their most popular models have been their moped-style e-bikes, and now the company has added the new Ariel Rider Grizzly electric moped to its lineup.

The Grizzly was just launched as something of an adventure-style electric moped.

In many ways it is an improvement over the company’s legendary dual motor Ariel Rider D-Class. I reviewed that epic 33 mph e-moped earlier this year and came away majorly impressed.

In the review, I mentioned there was still some room for improvement, such as adding rear suspension, beefing up the front suspension fork, and perhaps offering more battery capacity to feed those two power hungry motors.

To my surprise, the company called me up a few months later and said, “Done.”

The result was the Ariel Rider Grizzly, which took all of my suggestions and then added a few more I hadn’t even considered.

The powerful Grizzly sits on a pair of 20″ fat tires wrapped around 750W continuous motors that each put out 1,500W of peak power.

Those motors are also custom spec’d with Ariel Riders’ own patented metal reinforced gears instead of the typical nylon gears found in most standard geared-motor e-bikes.

The metal reinforcement makes the motors a bit louder than others, but also helps them handle the extreme power that Ariel Rider regularly dumps into them.

Ariel Rider doesn’t even list the speed of the Grizzly, which might make it one those “If you have to ask…” situations. The Ariel Rider D-Class rocketed me up to 33 mph (53 km/h) though and all indications are that the Grizzly should match if not surpass the D-Class’s performance. Most of Ariel Rider’s e-bikes ship with a 20 mph (32 km/h) factory installed speed limiter, and it is the responsibility of the rider to decide when and where to remove the speed limit.

The front fork is an upgraded version of the one on the D-Class and the rear now gets dual coilover shocks.

The battery voltage has been bumped from 48V to 52V (which gives around a 7% power/speed boost) and a second battery was added to the frame. Between the 52V 17.5 Ah battery under the seat and the 52V 14Ah battery on the downtube, the bike packs in over 1,600 watt-hours of capacity.

That’s enough capacity for up to 60 miles (100 km) of range, according to the company.

The saddle received an upgrade to make it more comfortable, and is available in either a short or long version, depending on if you want to bring a friend. If so, there are upgraded fold-up foot pegs to give your pillion a comfortable place to rest his or her feet.

The added rear suspension will surely be appreciated by a second rider.

Hydraulic disc brakes and knobby fat tires should give plenty of safe grip for hitting trails, which is where the full-suspension design will really come in handy.

And the Grizzly even includes a full fender set so you won’t rooster tail mud onto yourself or onto all the chicks you pick up on the trail.

The Ariel Rider Grizzly is currently on pre-order with shipping expected in the beginning of February. The $3,299 e-bike is currently marked down to $2,799 as part of a combined early promo and Black Friday sale.

In fact, Ariel Rider has a number of Black Friday deals on its other bikes you’ll likely want to check out.

We’ve got a Grizzly with our name on it coming for review soon, so be sure to check back to see what we think of this high-powered electric moped once we can test it ourselves. Time will tell if other epic full suspension, dual battery electric mopeds, and minibikes like the Juiced HyperScrambler 2 should be worried or not.

And until then, check out my video review of the Ariel Rider D-Class, below. It is nearly as insanely powerful and definitely worth a look.