This belt-driven, four-wheeled AWD bike/car is solar-powered — and in production 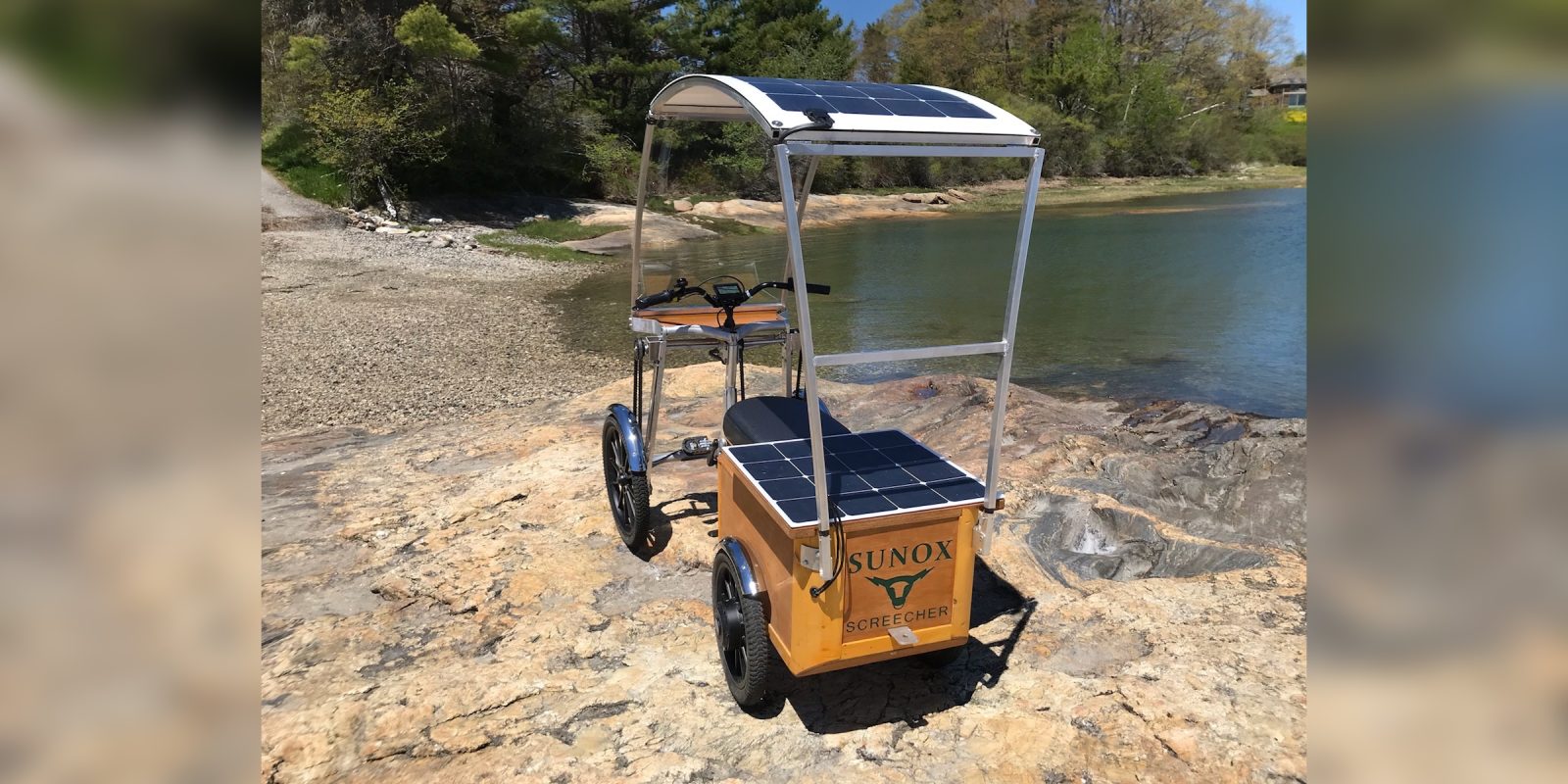 The Screecher is the latest four-wheeled electric bike car to reach production. But unlike the others, this one comes with some interesting features we haven’t seen before.

Developed by the Portsmouth, New Hampshire-based startup SUNOX, the Screecher is a neighborhood electric vehicle (NEV) with a few twists.

It combines e-bike technology with pedal car construction. The Screecher is powered by a pair of e-bike motors in the rear wheels. Each is rated for 350W of continuous power or 500W peak.

But it also has standard bicycle pedals connected to a very non-standard front-wheel-drive system. A belt drive transfers pedal power to the dual front wheels, giving the Screecher the ability to operate in all-wheel-drive mode. That also simplifies power delivery by removing a long chain running to the rear of the Screecher. It also means the hydraulic disc brakes can be used in the front, while regenerative braking can be employed in the rear.

There’s apparently also some form of “unique central suspension under the rider’s seat that enables lateral stability while lending a soft ride.”

And the removable battery is sufficient for up to 20 miles (32 km) of throttle-only range, or closer to 35 miles (56 km) with pedal assist.

If you’re worried about working up a sweat while pedaling this thing, consider that you’ve not only got a sun canopy above your head, but the canopy is also a solar panel used to trickle charge the battery. A second solar panel can be added over the rear cargo trunk to increase charging speed.

SUNOX says the pedal car can recharge in four hours from a wall plug or six hours from a solar charge. That sounds rather fast to us, but it may be helped by the fact that the 618 Wh battery isn’t actually that large.

Either way you slice it, filling up your electric pedal car with photons is surely cheaper than filling your gas tank, not to mention the obvious environmental benefits, as SUNOX chief operating officer Michele M. Schnitzel explained:

We believe the Screecher solves the global need for carbon-neutral solutions, specifically an environmentally friendly transportation vehicle, that not only puts the buyer at the forefront of renewable energy transportation technology, but saves them money too.

The top speed of 15 mph (25 km/h) isn’t fast, but I imagine you don’t want to corner this thing at 25 mph, either. And this obviously isn’t a middle-of-the-lane type of vehicle, at least not on standard suburban roads.

When it comes to utility, the Screecher offers a tow hook for pulling a trailer, and is even foldable for transporting within another vehicle.

SUNOX has started low-volume production of the Screecher and has already shipped units to customers around the world. Priced at $4,495, it comes in at around half of what other popular electric pedal-cars cost.

Here’s what I like about the Screecher: It doesn’t try to be something its not. It doesn’t opt for fancy body panels or try to be the Ferrari of electric pedal cars.

Rather, it looks like something my friends and I would have built in engineering school. Which I love. They don’t try to make it look too polished; they just make it work.

And the biggest benefit is that it doesn’t send the price sky-high by trying to do too much. Other electric pedal cars like the PEBL have prices approaching five figures, which puts them far out of reach of ordinary Americans.

But for the price of a nice electric bicycle, the Screecher could actually be a fun and utilitarian vehicle for many communities. This is obviously very location-dependent, but I can see many locales that would be perfect for a Screecher. Everything from picking up the kids from school to grabbing a load of groceries would certainly be more fun like this!