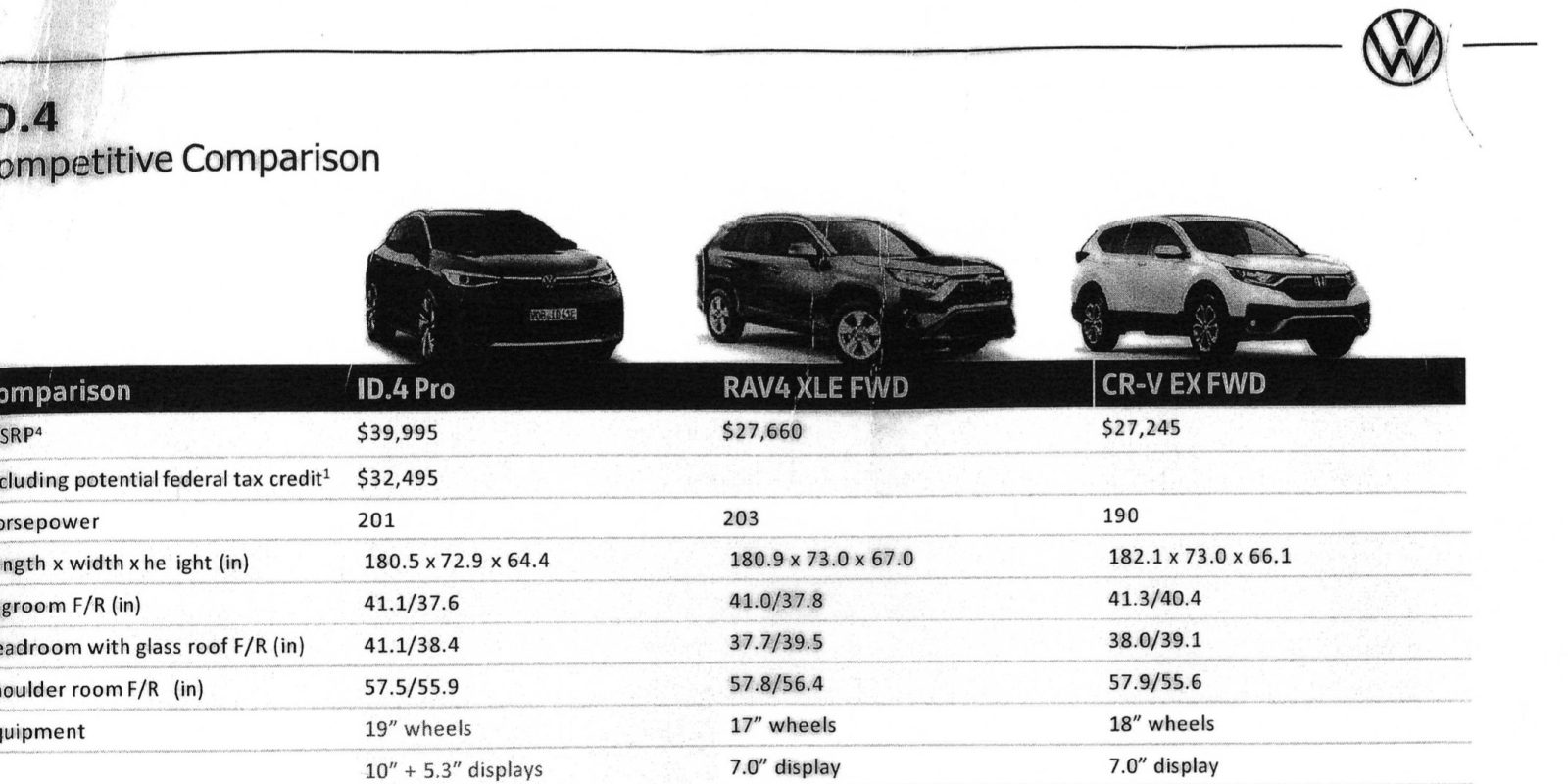 A dealer cheat sheet for the upcoming VW ID.4 electric SUV has been leaked, and it shows that the company considers gas SUVs, rather than electric SUVs like the Mustang Mach-E, Tesla Model Y, and upcoming Nissan Ariya, as its direct competitors.

The cheat sheet, posted to internet forum VWIDTalk.com, is intended for dealer use as a basic rundown of the capabilities of the new ID.4. It consists of four pages of information and highlights the capabilities that VW thinks are most important for dealers to know while selling the car.

There are lots of various specifications listed, like interior space numbers, tech features, option availability, and so on, but the most interesting aspect is on page 3, where VW engages in a “competitive comparison” against similar vehicles.

In contrast to the prevailing trend in the discussion about electric car models, which often focuses on comparing any two random electric cars against each other (e.g. this i8 vs. P85+ showdown, clearly very similar vehicles — though the comparison did turn out interesting nonetheless), VW has instead compared the ID.4 against the current leaders in the market: the gas-powered RAV4 and CR-V:

The comparison shows the ID.4 coming in with a significantly higher price, even after tax credits are taken into account. Further local and state incentives could bring that price down closer to the price of the gas competition. VW highlights elsewhere in the document that the ID.4 could also save an estimate $3,500 on fuel costs over five years of ownership when compared to the average new vehicle, which makes the initial price difference negligible.

But VW underlines that the ID.4 also includes several premium features which the competition does not. The ID.4 has much more headroom (3 inches) and also comes with larger wheels, dual infotainment displays, heated seats and steering wheel standard, wireless phone charging and a companion app, and IQ.DRIVE, VW’s hands-on semi-autonomous driver assistance suite. The ID.4 also has better warranty coverage.

VW’s choice here is meaningful because it shows that VW is going for a much bigger market than many automakers do with their electric models. Rather than fighting over the small slice of the pie that electric car sales currently represent, this helps to expand that slice and make it larger.

Many previous EV entries have focused either on compliance with fuel efficiency requirements or on targeting Tesla in an attempt to wrest back some stolen market share, both of which limit potential sales. By targeting the larger market, VW sets itself up for much higher possible sales numbers.

It’s also meaningful because this is a dealer-facing document. One issue with EV sales is that dealers just refuse to sell them. By telling dealers how the ID.4 stacks up against gas cars, VW isn’t just preparing dealers for conversations with shoppers who are adamant about electric cars, but rather for conversations with typical shoppers who just want an SUV and haven’t really thought about electric.

And of course, most importantly, the fewer gas cars we sell and drive, and the more EVs that replace them, the better chance we have of facing the climate crisis that is currently ravaging the Earth we depend on.

Have a look at the full document below and let us know in the comments if you find anything else interesting: