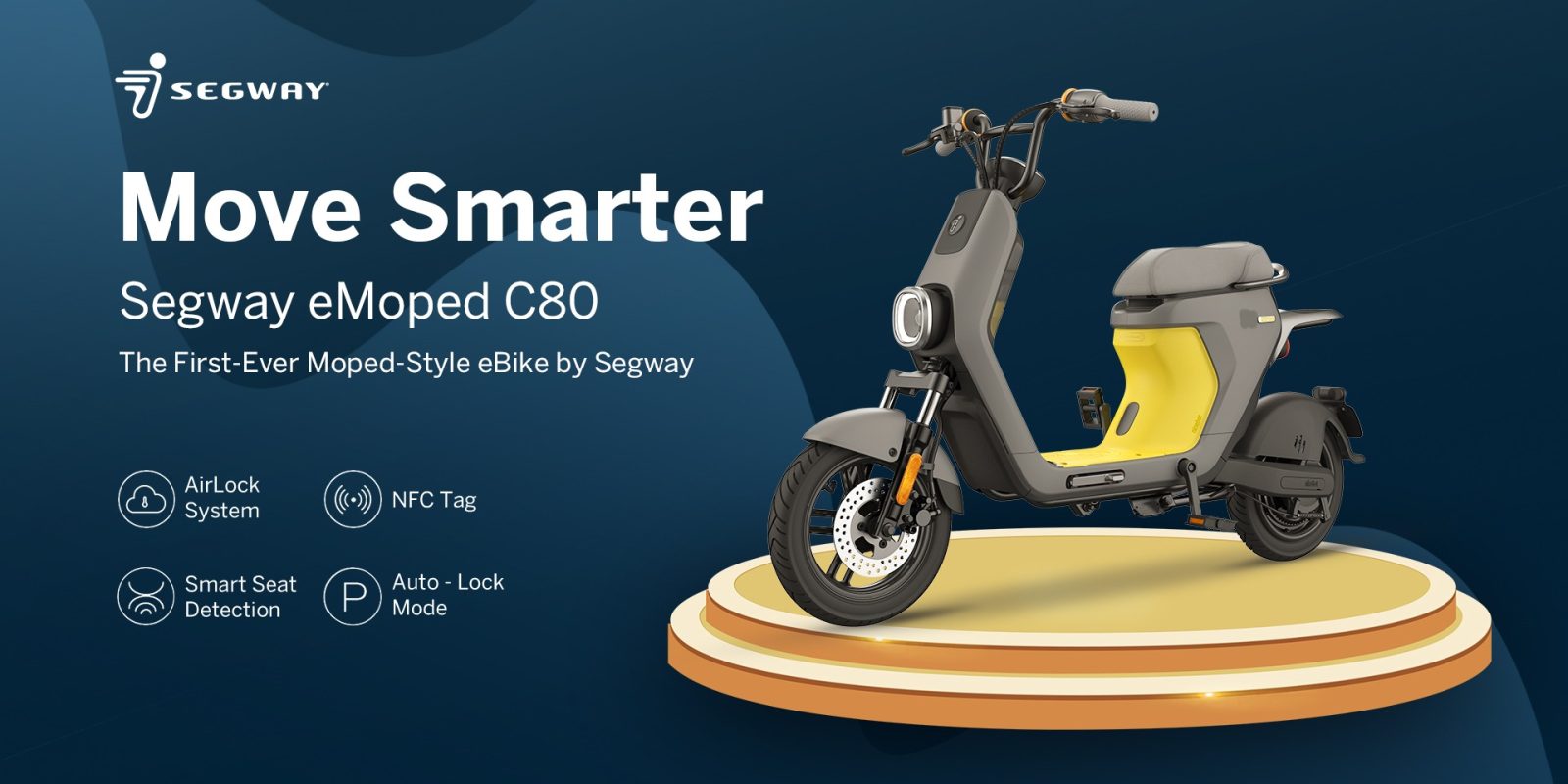 Segway has been on a roll, launching new personal electric vehicles seemingly monthly lately. After recently opening sales for the company’s new adult-sized electric go-kart, now Segway is unveiling and taking orders in the US and Canada for the company’s popular C80 electric moped.

Segway’s electric moped line first launched late last year in China, but has been reworked with more power and a higher top speed for the US and Canadian markets.

The updated model is known as the Segway C80 electric moped and has just launched for pre-orders with delivery set for November of this year — just in time for the holidays. And with a price of just $1,899 including free shipping, it undercuts many other electric mopeds while offering significantly more embedded technology and smart features.

The Segway C80 features a bright, rounded design reminiscent of the NIU U-series electric mopeds. It sports a rear 750 W motor and a top speed of 20 mph (32 km/h).

The Segway C80 electric moped includes functional pedals that qualify it as a Class 2 electric bicycle in the US, meaning it should be street legal on just about any public road that bicycles are allowed and will even be permitted in bicycle lanes. And unlike many faster mopeds, the C80 requires no license or registration since it is technically still a bicycle.

But unlike a traditional e-bike, the Segway C80 electric moped offers floorboard space for the rider’s feet (and the pedals even appear to be easily removable if riders don’t want them dangling off the sides).

That step-through design with a floorboard combines with the rear rack to offer a number of options for transporting cargo and bulkier items that are difficult to carry on a conventional electric bicycle. While the idea may be foreign in the US, it is quite common in Europe and Asia for riders to operate a scooter or moped while carrying cargo between their feet.

In addition to the distinctly moped-style design, the Segway C80 also offers a number of high-tech features that most electric bicycles don’t offer.

Most of the embedded tech is related to locking and securing the electric moped against theft. That includes built-in GPS tracking for anti-theft protection, though a number of features mean that theft is much less likely than a typical (i.e. not-smart) e-bike.

The C80 uses keyless operation with two included NFC cards and also offers the option to use proximity unlocking via your smartphone, which unlocks the bike as soon as the rider approaches. There is also a smart seat sensor that enables auto-locking to engage the wheel lock and vibration alarm after the rider parks and rises from the seat to walk away.

Other interesting features include color-coded rings on the handlebars that give the rider an immediate indication of the Segway C80’s status.

The C80 includes a large, easy-to-read LED display and the headlight has an ambient light sensor to adjust brightness so it doesn’t always have to be blindingly bright when not needed.

The handlebars are nicely uncluttered, largely thanks to a clever design that left just a single multi-function button on the right bar. One push turns the Segway C80 electric moped on or off, pushing while riding engages cruise control, and pushing while holding the brake lever pops the seat.

There’s even regenerative braking via the rear hub motor to compliment the front hydraulic disc brake and rear drum brake.

Mass production of the Segway C80 begins next month with shipments to the company’s US warehouse set for late October to ensure the mopeds can begin deliveries in November. The $2,199 price has been marked down to $1,899 for pre-orders, and Segway is even including free shipping (which is often a hidden cost in these pre-order situations).

Pre-orders are being collected via Indiegogo, which may give pause to some but has been a tried-and-true method for new releases in the world of micromobility over the last few years.

Plus, Segway (which is now owned by micromobility giant Ninebot) isn’t some fly-by-night startup company, so it’s all but guaranteed that they’ll deliver.

Could you see yourself scooting around your city on the Segway C80 electric moped? Let us know in the comments section below!