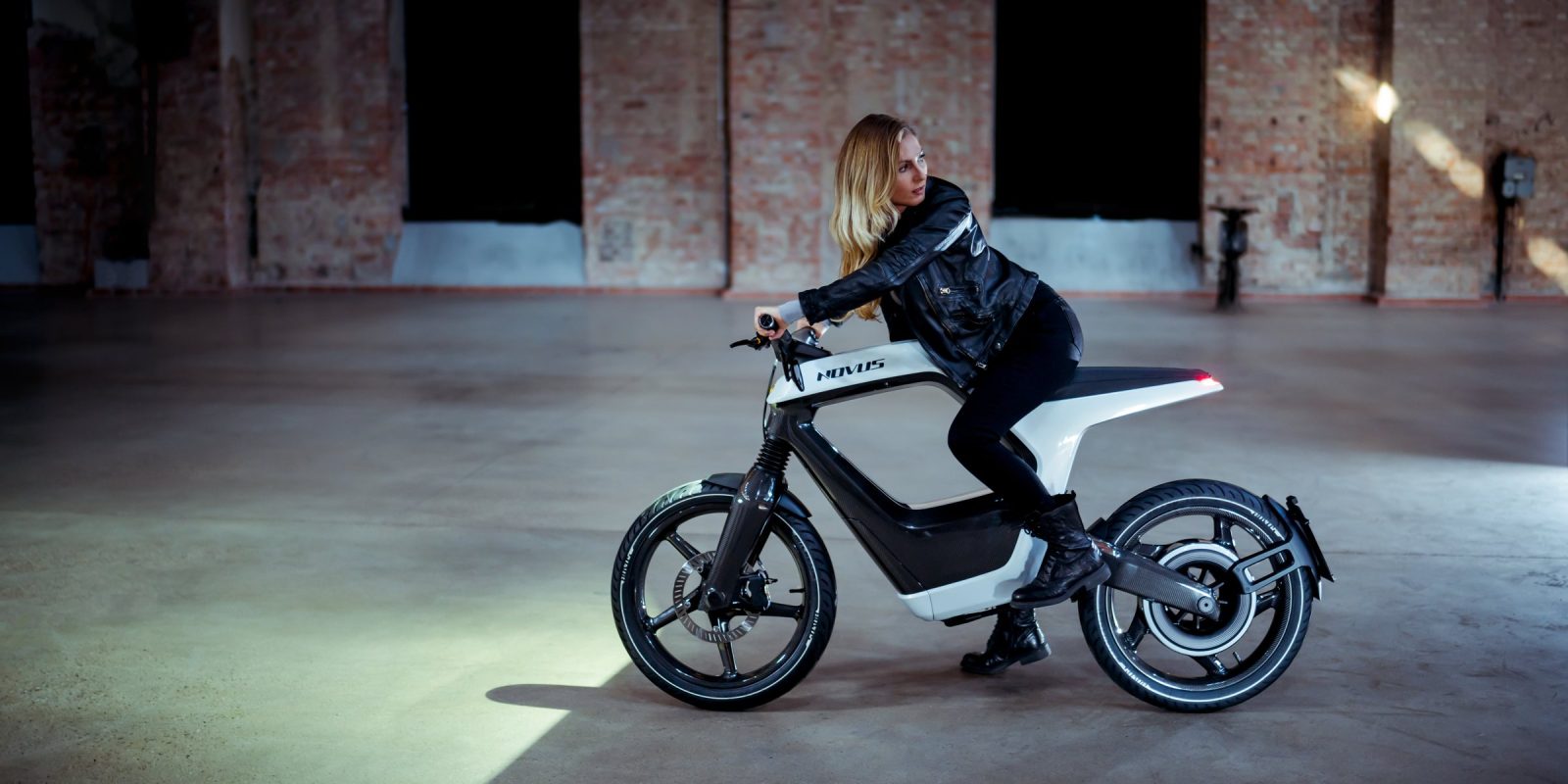 A year and a half ago German startup NOVUS unveiled the first prototype of their new carbon fiber electric motorcycle. The design has since been updated into a more robust bike, yet the sky-high price has remained just as lofty.

I’m not going to bury the lede here.

Alright, so what are you getting for that much money?

Well, we’re actually talking about a pretty stunning and absolutely unique electric motorcycle, if you can afford it.

That extremely lightweight construction is thanks to the designers’ goal of melding bicycle and motorcycle design. Or as the NOVUS team explained in a statement provided to Electrek:

“Our design approach was to combine the advantages of the bicycle world with those of the motorcycle world. The lightness and agility of a pedelec combined with the performance and sovereignty of a motorcycle. We saw a gap here that we wanted to close with NOVUS.”

Powering the NOVUS electric motorcycle is a direct drive rear hub motor with a peak output of 18 kW (24 hp). That’s nearly a 30% bump in power compared to the previous NOVUS prototype we saw in early 2019.

The 4.3 kWh battery is permanently installed in the lower portion of the central frame, lowering the bike’s center of gravity. At 19 kg (41.9 lb), the battery makes up just over a quarter of the bike’s total weight of 75 kg (165 lb).

Suspension is achieved with a monofork in the front offering 90 mm of travel and a rear 110 mm travel suspended swingarm. The rear suspension is entirely hidden from view and encased within the frame.

A large LED display serves as the bike’s main display, but a smartphone can also be placed above the display, allowing the rider to see vehicle information on their smartphone via the NOVUS app. The app is also used for changing settings on the bike and enabling various features. There is no physical key, and instead the bike is unlocked either via the app or an NFC chip.

NOVUS will be hand-building their electric motorcycles starting in 2022. If you have the time and the money to wait for one, you can already put a pre-order down now with a €1,000 deposit.

Alright, so here’s the thing. Yea, it’s crazy expensive. And no, I’m not going to buy one. And not because I don’t already spend my money on other e-motorcycle startups that I cover. But because I’m not really in the demographic that NOVUS is marketing to here.

But that doesn’t mean I can’t appreciate a really cool and innovative electric motorcycle. I absolutely appreciate the design and attention to detail that went into shaving the weight down on this bike with nearly everything made from carbon fiber. And the open monocoque design is a really cool way to merge bicycle design with light motorcycle power and performance. Even if you’re going to hate on the price, you’ve got to admire the design effort that went into this.

While I generally like to see removable batteries on light electric motorcycles of this size, the capacity of the battery means that this is on the edge of impossible. A 4.3 kWh battery would be a pretty hefty battery to carry around. My NIU NGT electric scooter has a pair of 2.1 kWh batteries, meaning it has nearly the same total capacity, but divided into two slightly more manageable battery packs.

Ultimately, the price is high, but for anyone that has the kind of disposable income that makes this kind of thing an impulse purchase, I think you’ll probably get a really cool motorcycle. Of course no one is going to buy the NOVUS because it’s the most sensible or value-oriented option. They’ll buy it because it is different.

And boy, is it different.