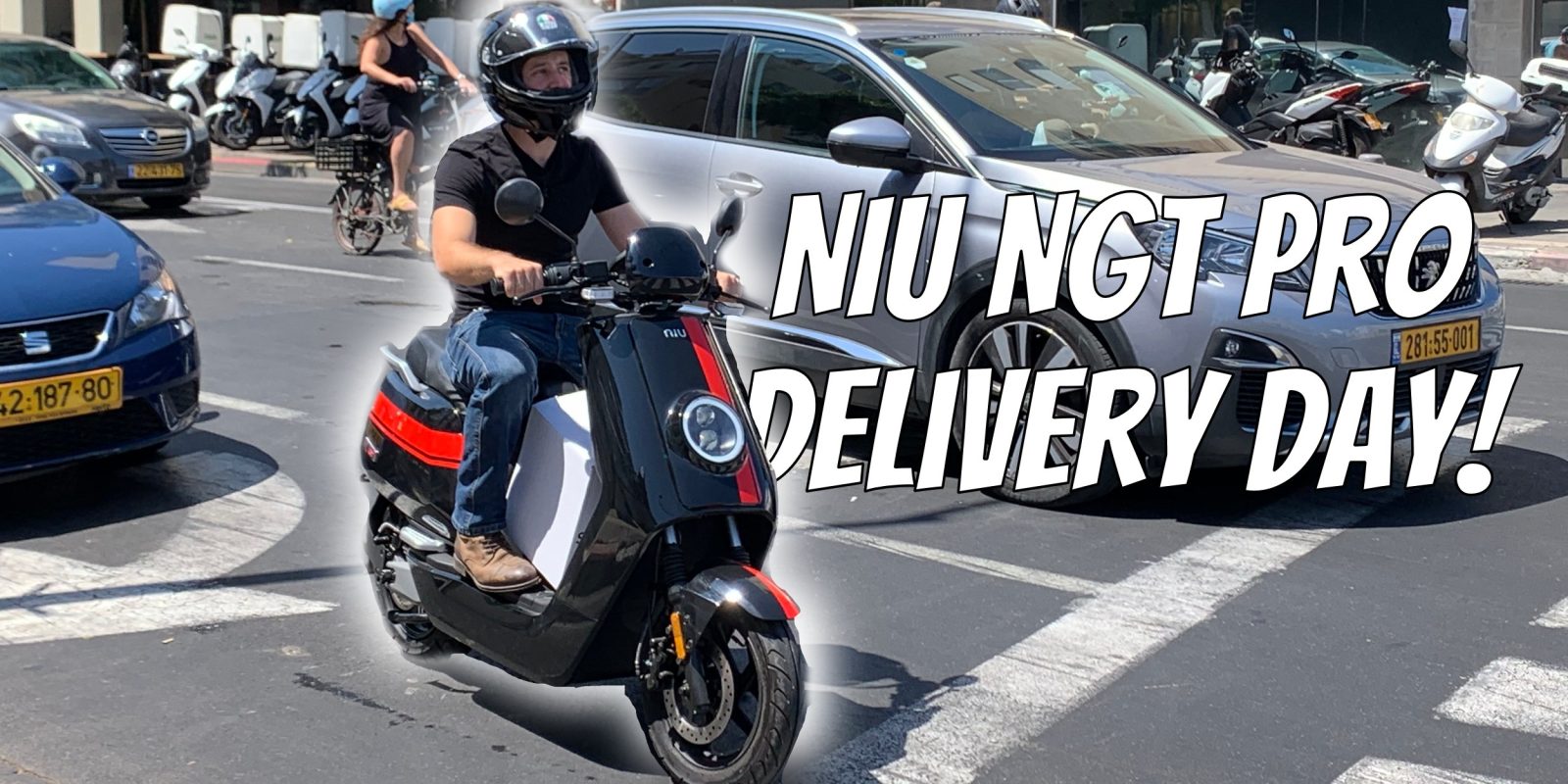 NIU has been rapidly expanding the availability of its seated electric scooters across Europe and North America, and I am happy to be one of the newest owners of NIU’s highest performance model, the NIU NQiGT Pro.

Below you’ll find what delivery is like, as well as my first impressions of this (spoiler alert!) awesome electric scooter.

Delivery day was a long time coming for me.

I put down a $100 deposit during NIU’s Indiegogo campaign to pre-sell the scooters nearly two years ago.

Sure, NIU entered the US market last year and I could have received my scooter there. The problem is that I wanted mine delivered in Tel Aviv, where I live most of the year when I’m not in the US.

It took a bit longer, but the Tel Aviv NIU dealership finally opened recently. And that meant the day had arrived to receive my new NIU NQiGT Pro!

I made a quick video of the delivery process and first test ride, if you’re interested.

The “delivery” is more of a pickup, since you go get it and ride it home. But first you get the walkthrough of all the cool features.

There’s a lot to go over, including the double battery packs, the different charging methods (remove the two batteries and charge with a supplied Y-splitter charger, or just charge the batteries inside the scooter from a shared port), the three driving modes, the regenerative braking, etc.

It’s a fairly simple scooter, but there’s still a decent amount of info to take in. Around half the time was spent familiarizing myself with the smartphone app as well, which allows you to geolocate your scooter, check the charge and health of each battery, run a 100+ point check of all your scooter’s systems, etc.

After around 30 minutes, the keys were handed off and my new scooter was officially mine.

I also got a box full of goodies, which was mostly the giant charger and Y-splitter. The Tel Aviv dealer is brand new and doesn’t have some of the accessories yet, so I wasn’t able to pick up a tail box quite yet. Instead, I went old-school and rode home with the box of goodies between my feet, resting on the floorboard. Chalk one up for the utility of a scooter!

I was super excited for my first ride, since this day had been a long time coming. And the build-up was totally worth it!

With a week or so of riding under my belt now, those numbers seem to be repeatable.

I’m also really impressed with the range. The NIU NQiGT Pro has a pair of 2.1 kWh battery packs. The ideal range is advertised as 140 km (87 miles).

In actuality, I’ve found that I’m getting slightly over 100 km (62 miles) per charge, but I’m also riding around half the time with my wife as a passenger, and I’m often riding on roads that allow me to cruise at top speed, which doesn’t do the range any favors. So considering that I’m putting the scooter in basically the worst situation possible for range, it’s still performing great and I can realistically get away with charging around once a week.

It’s obviously too early for a full review, which will certainly be coming after I can put a few more miles on the scooter. But so far I’ve found that the NIU NQiGT Pro has exceeded my expectations. It’s a comfortable scooter that has you sitting up high and gives you a good view of the road, it handles nimbly, it has great speed and range for the city, and it’s pretty darn cool looking too, if you ask me.

In a sea of SYM and KYMCO scooters at the front of every stoplight, I definitely stand out. And not just because I’m the only silent scooter there.

Stick around to see my upcoming full review of the NIU NQiGT Pro electric scooter. And if you want to grab your own, check NIU’s site to see if they are in your country. They’re all over the place now, so the odds are good.

Prices vary from place to place but are in the neighborhood of $4,500 in the US or €4,500 in Europe. This is also the highest-performance model that NIU offers, and they have other scooters that start in the $2Ks and $3Ks, if that’s what you’re after.

And until NIU eventually releases their 100 mph (160 km/h) electric motorcycle they unveiled earlier this year, the NIU NQiGT will have to hold me over!