That’s the price, and let’s get it out of the way right now. Because even though this bike is going to be unobtainium for most people, there’s still a lot to appreciate in the design.

So let’s forget about the fact that you and I will probably never ride or touch one of these. Instead, let’s take a look at what happens when you give engineers and designers the ability to create an electric motorcycle without the confines of pesky limitations like budgets.

The most visually striking component of the NOVUS electric motorcycle is the frame. A carbon monocoque, it performs doubly duty as both the structural exoskeleton and elegant body of the bike. It is also much lighter than steel, aluminum or any exotic frame material. 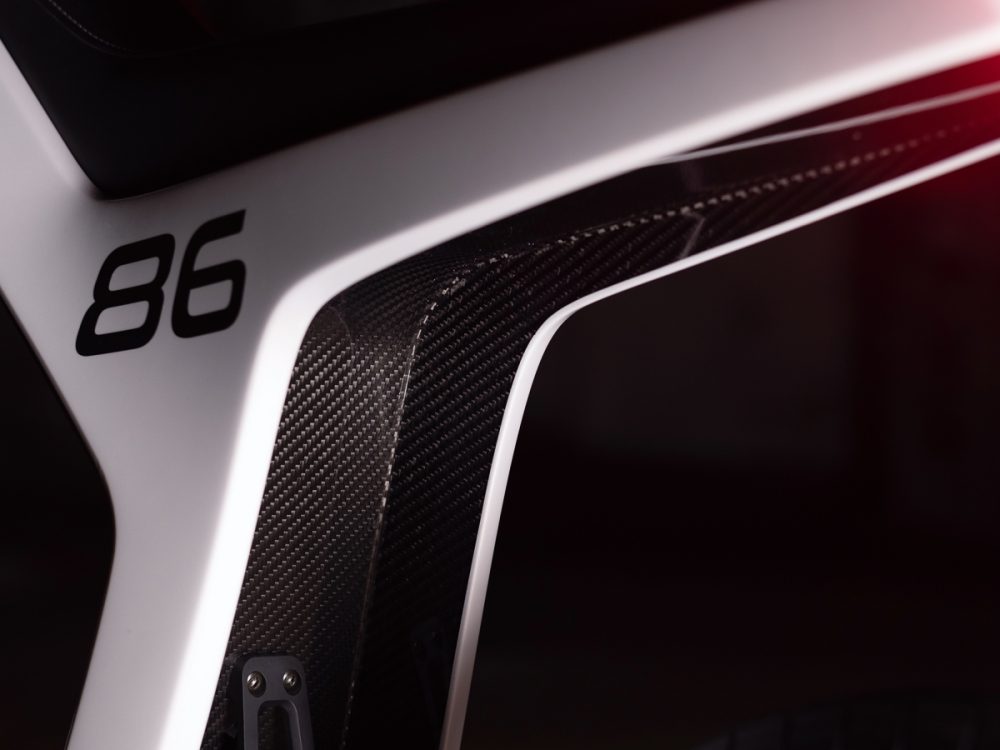 The rear motor is a direct-drive hub motor that the company claims puts out 200 Nm of torque. If true, that would make it one of the torquiest electric motorcycles ever. For reference, the Curtiss Zeus has only 196 Nm of torque, which provides it a 0-60 mph time of 2.1 seconds. So 200 Nm might be a bit of a stretch here, as noted on Electric Motorcycle News.

Even so, at 14 kW peak power, the NOVUS motor packs quite a punch as it powers the 85 lb (39 kg) bike up to its maximum speed of 60 mph (97 km/h). That top speed means the NOVUS electric motorcycle is best employed as an urban assault bike or for cruising on winding back country roads. Highway capable, it is not.

But honestly, with a bike that looks this wild, you want to be going slow enough for people to see it anyways. 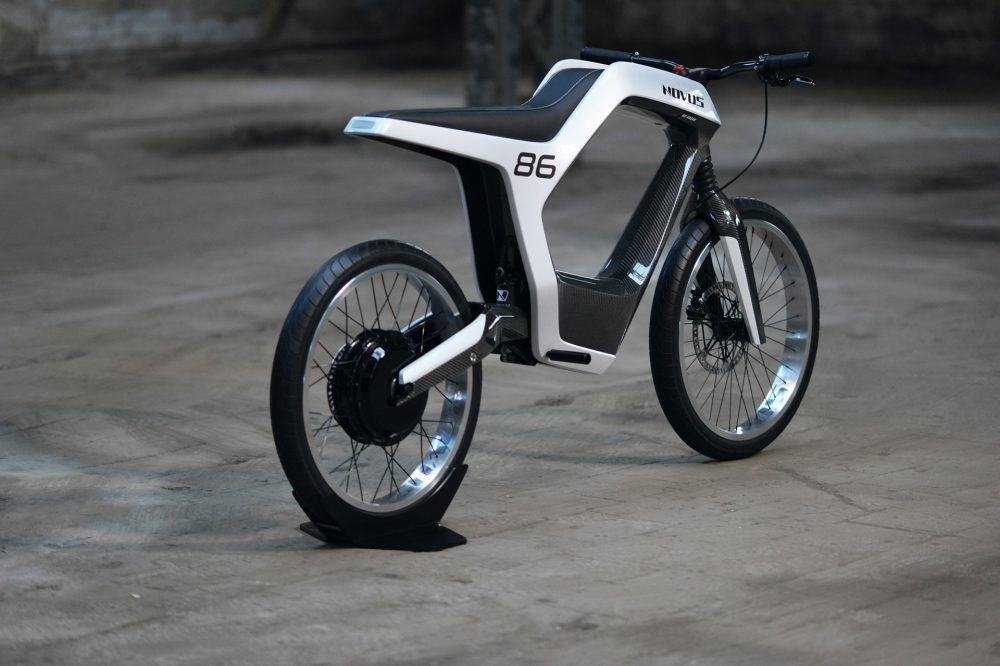 The Li-ion battery is mounted low on the bike to reduce the center of gravity and improve handling. 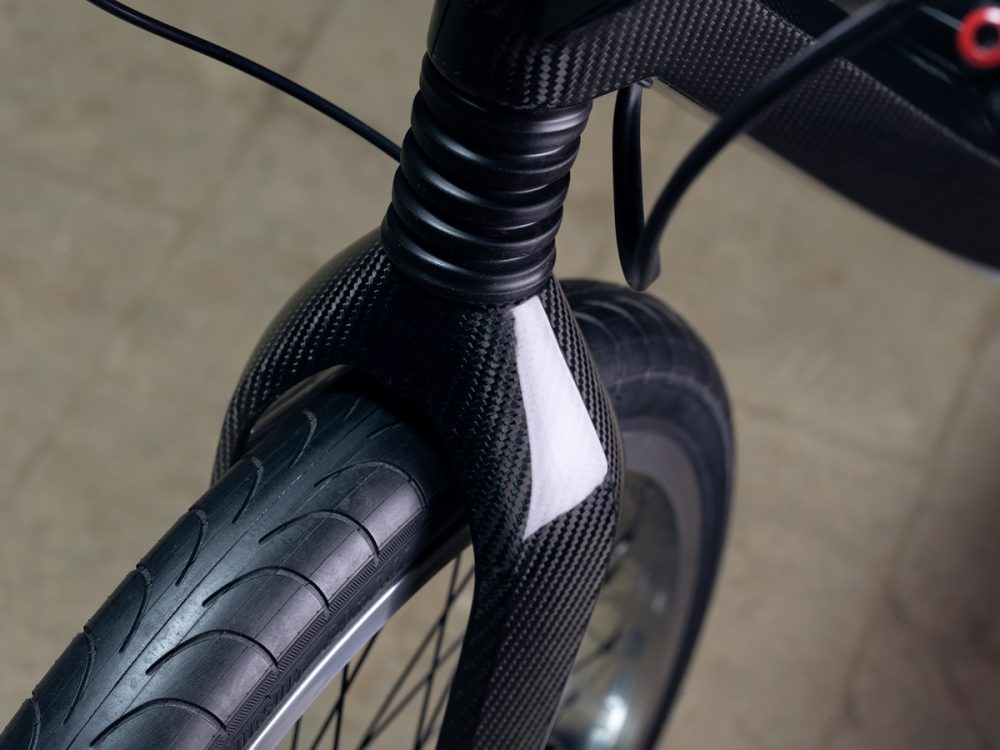 The NOVUS electric motorcycle incorporates front suspension into a single strut in the fork below the headset. The specially developed carbon fiber front fork matches the unique design of the bike and the hardness of the damper is adjustable.

NOVUS hasn’t indicated how much travel that unique suspension fork is capable of, but claims that it has “enough suspension travel ensure a comfortable ride with precise response.”

The bike’s rear suspension is nearly invisible, hidden just above the rear swingarm in a recess in the carbon frame. 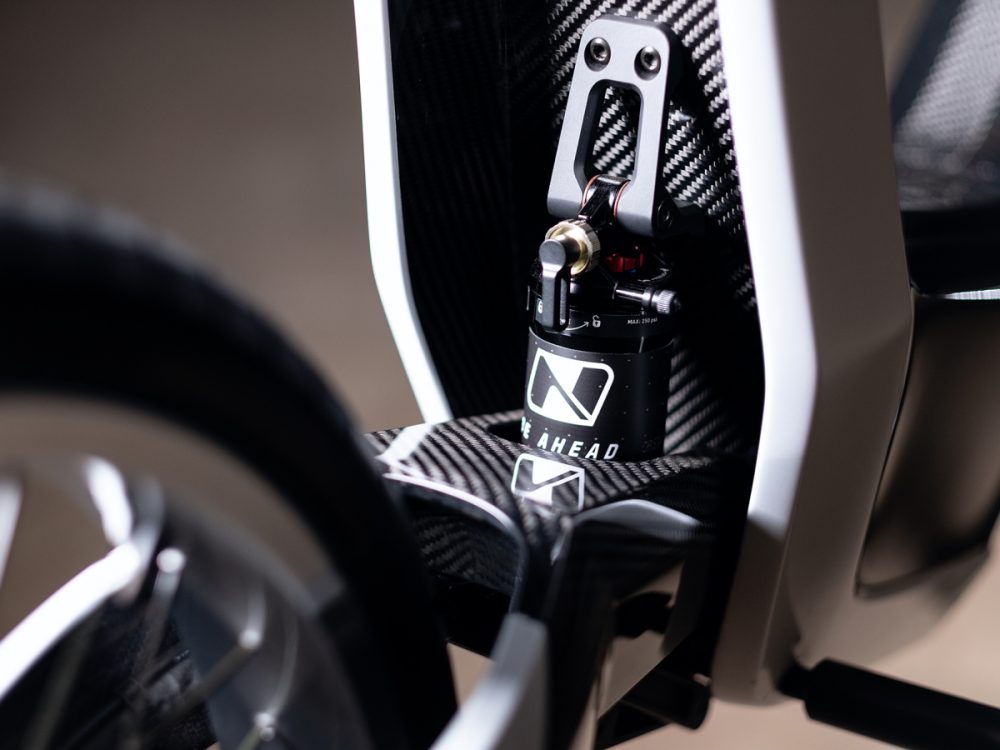 “The deflected air damper is adjustable in both rebound and compression and can be adapted to the road conditions at any time.”

Braking is accomplished with dual hydraulic floating caliper disc brakes. In keeping with the bike’s central theme, even the brake levers are made from carbon fiber. 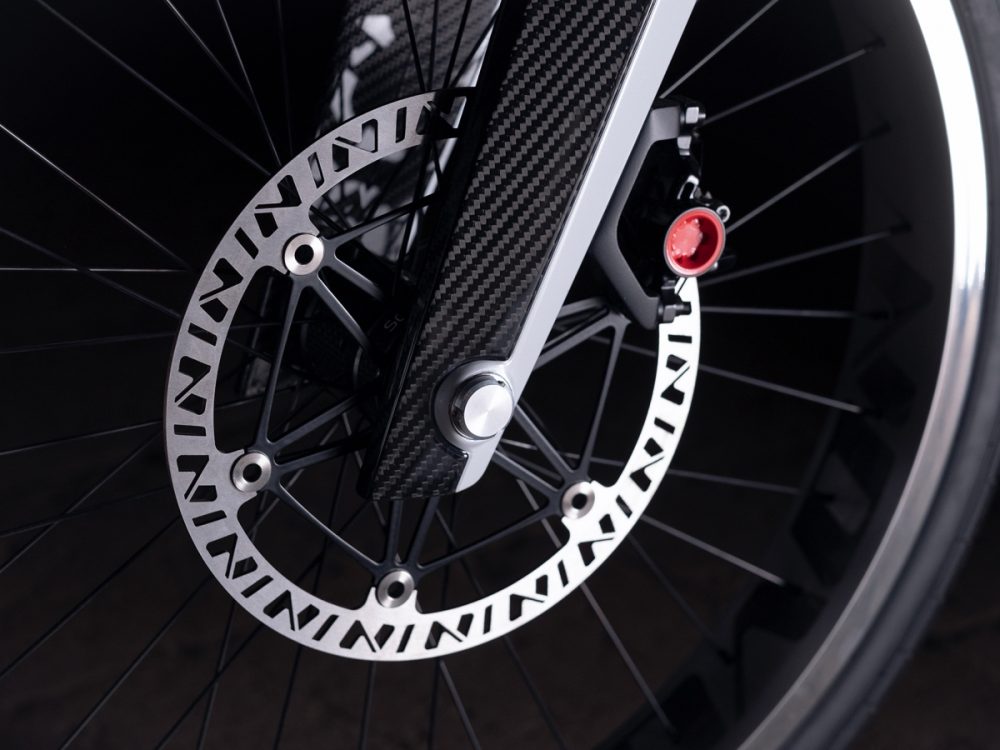 While the headlight plays a prominent design role in most electric motorcycles, it is nearly hidden on the NOVUS. Integrated directly into the stem, the LED light turns with the handlebars. However, it appears to have an oddly steep angle that doesn’t seem to throw the light sufficiently forward.

With a similarly hidden style, the tail light integrates into the carbon fiber monocoque frame. Sitting flush, it is visible when illuminated but nearly hidden when not in use.

The seat incorporates stitched leather that continues tip-to-tail, all the way forwards through where a gas tank would be located on a conventional motorcycle. The leather on-button is integrated directly into the forward portion – a nice touch. 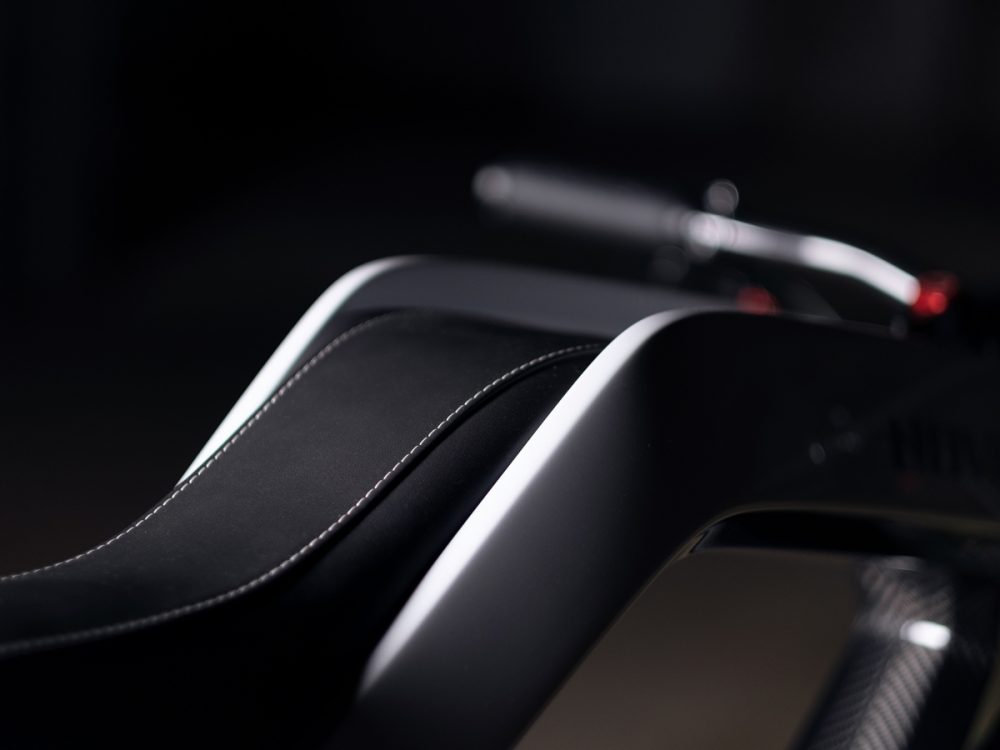 The display appears to be removed entirely, instead replaced by a smartphone. 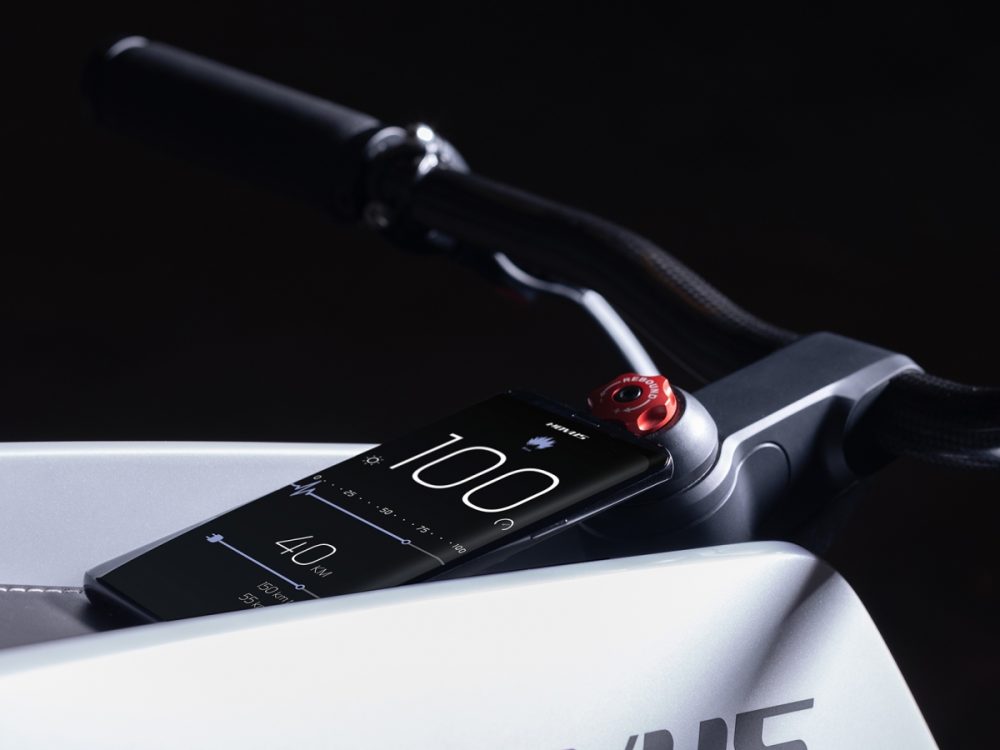 As described by NOVUS:

“The benefits of the connected, digital world make it possible to integrate the smartphone not only as a control and display instrument, but also as a digital key. By eliminating unnecessary hardware, new ideas can be made instantly available.”

Elegant design or cop out? You decide.

It’s out there, but I actually like the design. While so many electric motorcycle designers are sticking with conventional setups and fake gas tanks, you have to give NOVUS credit for thinking way outside the box here. 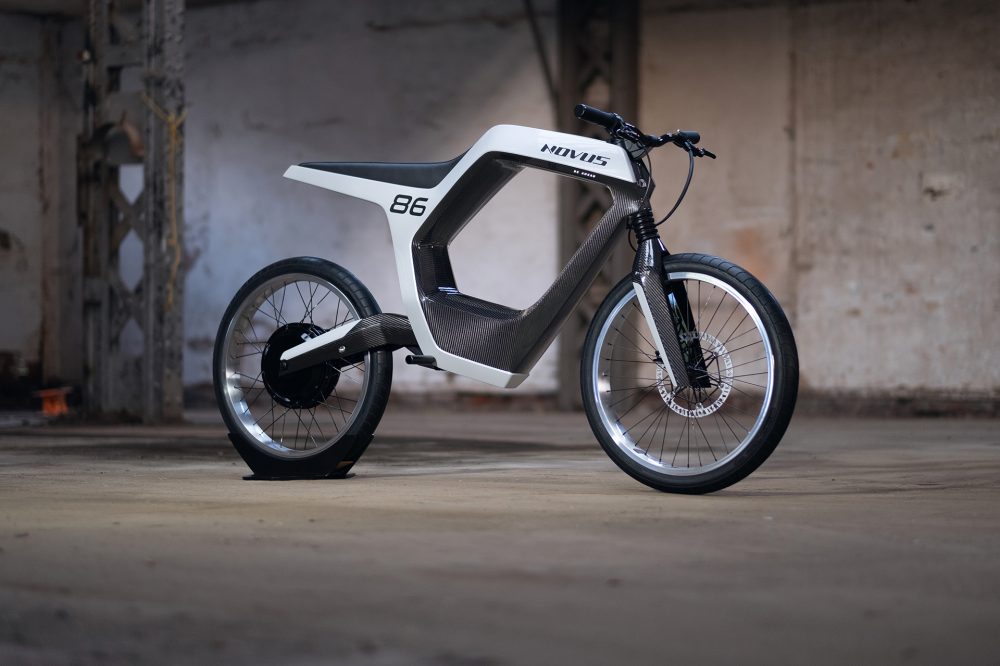 But at $40,000, the price is beyond unreasonable for a 60 mph and 60 mile range electric motorcycle.

It’s not the most expensive bike out there. The Arc Vector starts at nearly three times that price. But that’s a luxury electric superbike and the NOVUS electric motorcycle is a city commuter. And for $10,000 less, you can snag Harley-Davidson’s new LiveWire electric motorcycle. It doesn’t look as innovative, but its still an impressive looking bike.

If you pay $40,000 for this NOVUS electric motorcycle, are you going to get a luxury bike? Definitely. Is it worth it? That essentially depends on your tastes. If you have the funds and you like the design, then it just might be worth it. There really isn’t anything else out there quite like it. But as is the general theme in electric motorcycles right now, you have to pay to play.

So while 99.99% of us will never own a NOVUS electric motorcycle, perhaps that 0.01% is out there reading this article right now.

And to that lucky man or woman I say this: