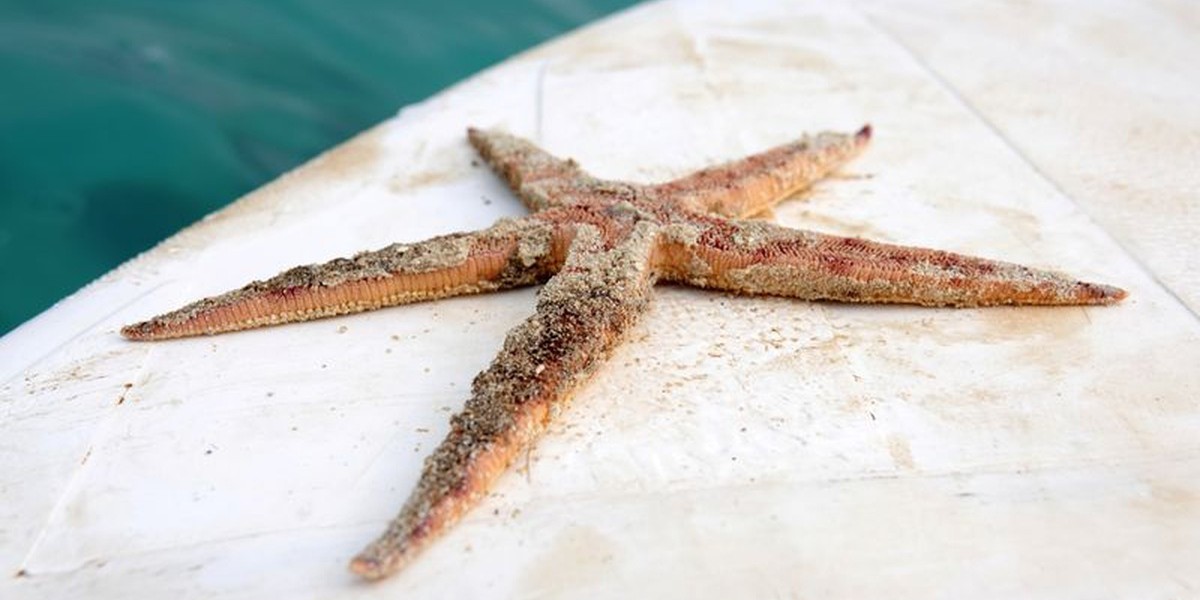 As Electrek reported on Monday, a Japanese ship spilled around 1,000 metric tons of oil after hitting a coral reef near the Blue Bay Marine Park on July 25. The marine park is known for its beautiful coral and diverse fish.

So it’s unsurprising, but no less heartbreaking, that marine life is bearing the immediate brunt of this fossil-fuel spill disaster. Mauritians are doing everything they can to clean up the mess, from making absorbent straw barriers to bundles of human hair (yes, that works), but they’re still having to pull dead eels and starfish (pictured above) out of the water. Crabs and birds are also dying, and once the oil settles, it will damage the mangroves and coral.

The spill has set back two decades worth of restoring the natural wildlife and plants in the lagoon, which started after the government banned sand harvesting in the area back in 2000, said Vikash Tatayah, conservation director at Mauritius Wildlife Foundation, a non-governmental organization.

Further, the ship is apparently severely cracked, and it’s expected to break up, thus releasing another 2,000 metric tons of oil. Here’s how you can help.

Let’s stay with the topic of marine life. Carbon dioxide emissions make the oceans more acidic, and that’s not good for creatures like crabs and oysters. Scientists found that the shells of young Dungeness crabs along the US West Coast were dissolving due to a lower pH level as the Pacific Ocean becomes more acidic.

Watch the World Economic Forum’s video below, and you can read more about it here.

And we move from the Pacific to the Atlantic. A couple of weeks ago, Electrek wrote about how the North Atlantic Right Whale is on the  IUCN Red List of Threatened Species’ Critically Endangered list. That’s because they’ve been pushed north by climate change, as their food (zooplankton) has also gone north in search of cooler waters. And that puts the whales in danger of colliding with ships and getting entangled in fishing nets.

So Maine’s lobster fishery has lost its Marine Stewardship Council sustainability certification, which it was awarded in 2013. The Bangor Daily News explains why:

The decision comes after a federal judge ruled in April that the National Marine Fisheries Service had understated the threat of entanglement in lobster fishing gear to the population of right whales in the north Atlantic ocean, which is estimated to be around 400 animals. The ruling effectively lowered the fishery’s sustainability score, and led to the decision to suspend its certification.

[The decision] recognizes that the status quo is not working for these whales and adds an incentive for state and federal government, fisheries managers and fishermen to improve the fishery,” the group said. “Effective enforcement and deployment of proven tools like time-area management, gear modifications and a reduction in the number of vertical lines in the water will help reduce the risk to North Atlantic right whales and allow the lobster fishery to regain its certification.

The Maine Certified Sustainable Lobster Association will be working to gain its sustainability certification back to protect the Right Whale.

Wednesday was International Youth Day, and this year’s theme is “Youth Engagement for Global Action.” The United Nations explains:

The vast majority of challenges humanity currently faces, such as the COVID-19 outbreak and climate change require concerted global action and the meaningful engagement and participation of young people to be addressed effectively.

Join #31DaysOfYOUth, a social media campaign that will celebrate young people throughout the month of August, leading up and following International Day, to help spread the word and strike up a conversation surrounding youth engagement for global action!

The youth above already know about climate change, but how do you teach younger children about it? In short, openly and honestly, but Yale Climate Connections gave some guidance on how to approach this difficult subject:

Make sure it’s age-appropriate, but don’t avoid the topic. First, teach very small children about nature and how to respect and enjoy it. But psychotherapist Caroline Hickman of the University of Bath and the Climate Psychology Alliance says:

As soon as you start teaching them to talk, and engage emotionally and relationally with the world, climate change needs to be woven into their world, so they are developing that emotional intelligence and resilience from a young age.

Brush up on your knowledge first, and then ask them questions to gauge their knowledge. After reading up, then find out what they know — they may know more than you realize. Then you can have a meaningful conversation about the climate crisis. As YCC says, “Your effort will help show that it’s a topic worthy of your family’s time.” And no, you don’t have to be an expert. You can learn together. NASA has an interactive Climate Kids website, which is a good resource, for example.

Address science — and feelings. Talk about things like fossil fuels and emissions, and also give kids a chance to express their feelings about climate change. “Purposefully exploring how your child or children feel about climate change can help them better cope with the grief and anxiety that youth are increasingly experiencing.”

Give kids a reason to hope — and a way to take action. Teach them how to make small but meaningful changes around the home, such as recycling, composting, energy conservation, walking, and cycling, and point out solar and wind. Older kids can get involved in climate-change action groups and watching films and documentaries. And importantly, keep the conversation ongoing, beyond the initial talk — it has to be woven into everyday life in order to make a difference. This will equip kids with, to quote YCC, the “knowledge and emotional resilience” to be better able to cope with it.