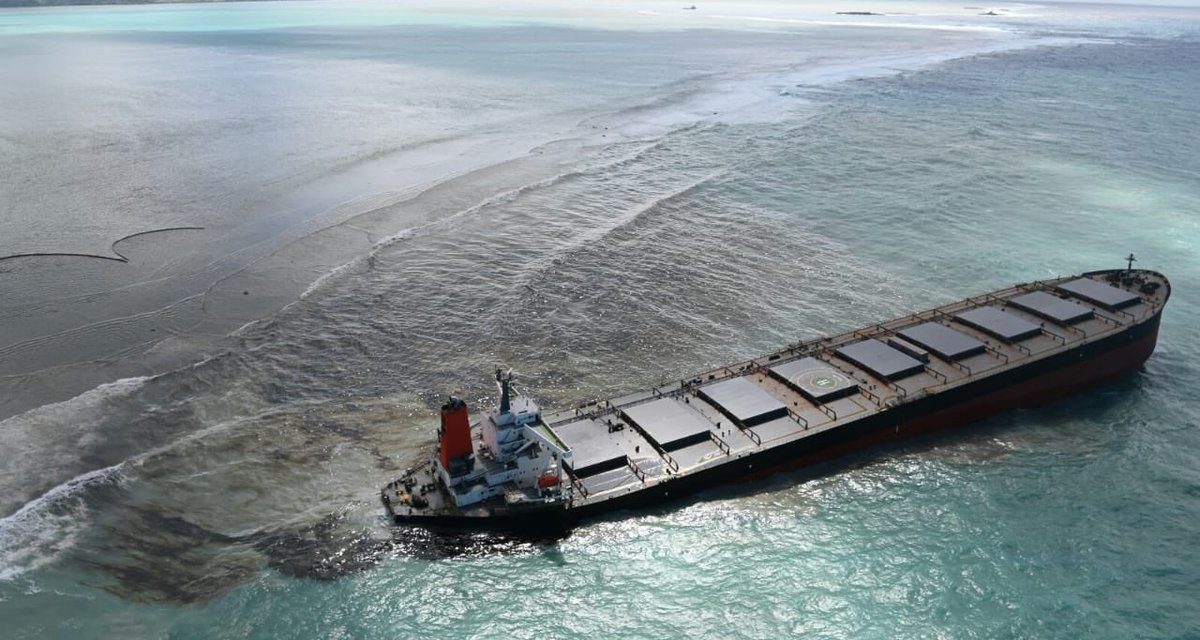 The Japanese MV Wakashio, owned by the Nagashiki Shipping Company and operated by Mitsui OSK Line, has spilled oil off the Mauritius coast after hitting a reef near the Blue Bay Marine Park on July 25. This is Mauritius’ first oil spill, a country with a population of 1.3 million people.

Mauritian Prime Minister Pravind Jugnauth has declared a state of emergency, and the country has appealed to the UN for urgent aid. France has also sent aid to the island.

Around 1,000 metric tons of oil has leaked, with 500 metric tons salvaged and some 2,500 metric tons remaining in the water. The oil spill is near the Blue Bay Marine Park, known for its superb corals and diverse species of fish.

Residents of the Indian Ocean island nation, a destination for tourists, are doing everything in their power to contain the oil but bad weather has made the cleanup difficult. Locals are making absorbent barriers of straw stuffed into fabric sacks, and making booms to float on the sea out of sugar cane leaves and plastic bottles. People are voluntarily cutting off their own hair to help.

Hair absorbs oil but not water. There’s been a big campaign around the island to get the hair.

It is really moving — everyone is doing what we can. It breaks our hearts to see the damage.

All the volunteers are covered in black. We will never be able to recover from this damage. But what we can do is try to mitigate as much as we can.

Due to the bad weather and constant pounding over the past few days, the starboard side bunker tank of the vessel has been breached and an amount of fuel oil has escaped into the sea.

Nagashiki Shipping takes its environmental responsibilities extremely seriously and will take every effort with partner agencies and contractors to protect the marine environment and prevent further pollution.

As we know from the Deepwater Horizon oil spill in the Gulf of Mexico, as an example, this latest oil spill is a disaster for Mauritius, who relies on tourism for its exquisite turquoise seas and marine wildlife. But here’s how human hair can help absorb the oil, as evidenced by this Vox video:

In the Gulf of Mexico, a study a decade later confirmed that oil settled into the seabed floor, and no fish in the Gulf have been free of hydrocarbons, which are the chief components of petroleum.

Maybe Mauritius should run a global hair drive? Hairdressers could sweep up cut hair, put it in a box, and ship it to help the cleanup.

How many reasons do we need to shift to green energy?