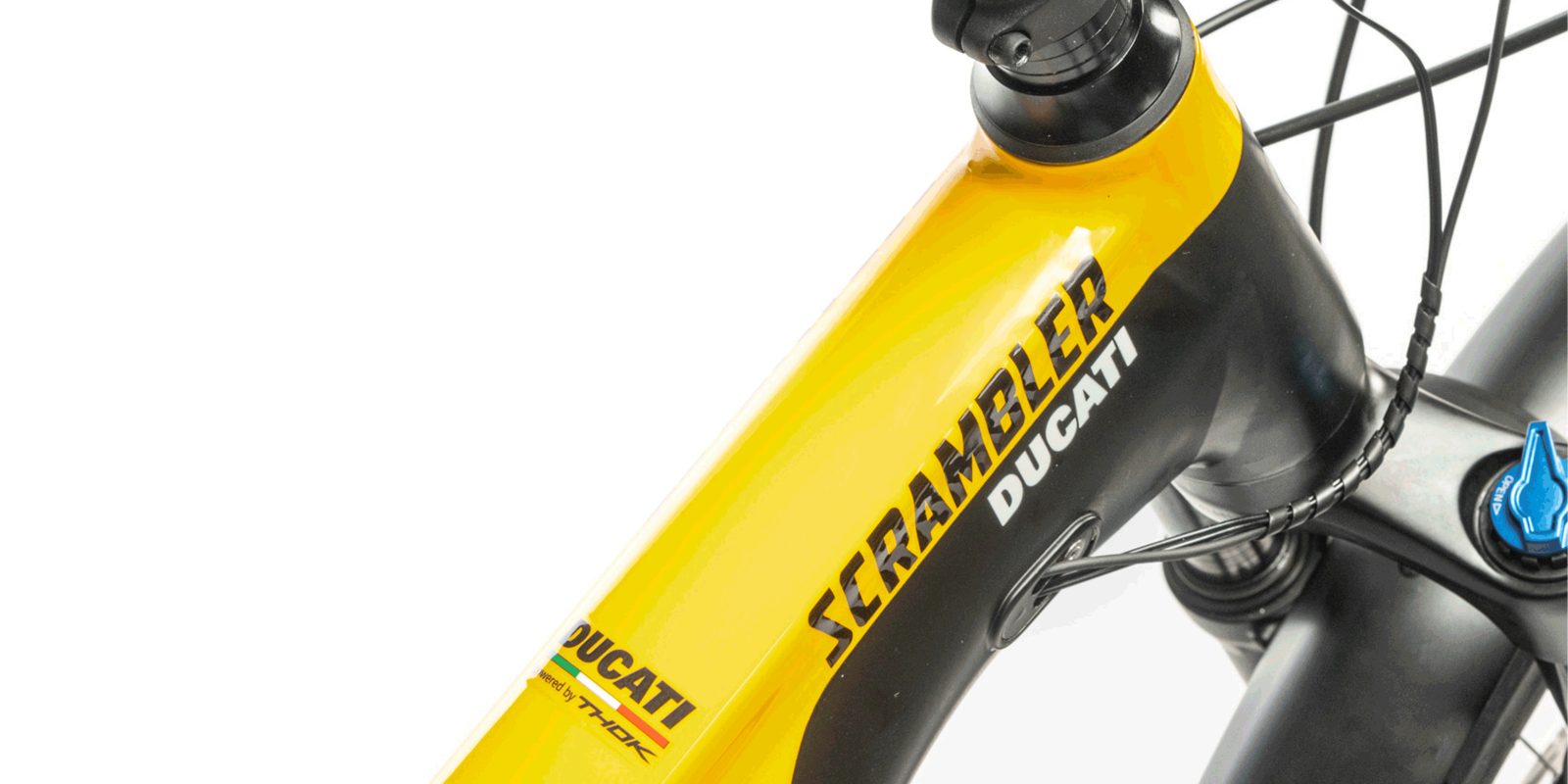 Instead of the electric motorcycle that Ducati has long promised us, its latest two-wheeled electric vehicle is another electric bicycle. This time, the company is announcing its new Ducati e-Scrambler electric bike.

Ducati is no stranger to electric bikes, having produced a number of them over the last few years as part of a partnership with electric bicycle company Thok.

The e-Scrambler is an urban trekking bike with a Shimano electric bicycle system at its core.

Energy comes from a 504 Wh Shimano battery that gets mounted underslung-style to the downtube, a favorite mounting position for Ducati….. err, Thok.

There’s no word on the estimated range of the e-bike, but on a similar Shimano setup I can get around 75 miles of extrapolated range with a medium amount of pedaling effort.

A Suntour XCR fork with 100 mm travel offers a bit of suspension relief up front, something the hydroformed 6061 aluminum alloy frame doesn’t.

Brakes come in the form of a pair of 4-piston Sram Guide T units clamping down on some giant 203 mm rotors. Sram also provides the transmission, a NX 11-speed in the rear. Both are good components, though not at the top end of Sram’s parts hierarchy by any stretch of the imagination.

The bike even boasts a dropper seat post, integrated lights, and a rear rack rated for 25 kg (55 lb) loads — all in a bike weighing just 22.5 kg (49.6 lb) without the pedals. “Why without the pedals?” you may ask. Presumably because once you screw them on, you’ll have to say 50 lbs, which sounds a lot heavier to the marketing folks than 49.6 lb.

For pricing, the Ducati e-Scrambler will run you €3,699 ($4,280). It’s available directly from Ducati as well as through their dealer network.

Between the included fenders, built-in lights, and high-strength frame with decently large volume tires, the Ducati e-Scrambler is shaping up to be quite an urban trekking e-bike. I’m a huge Shimano mid-drive fan, so I’m always glad to see the unit popping up on more bikes.

I love that they included a dropper seat post. At first it might sound a bit silly, especially for an urban e-bike. Dropper seat posts are normally used by mountain bikers so they can adjust their seat height on the fly without dismounting as they cross different types of terrain.

But for an urban bike, when you’re loaded down with cargo and come to a rest, it could be nice to hit a button and let your feet casually sink toward the ground. I’d much rather flat-foot it at a red light than hop in and out of the saddle each time.

The price is a bit high for me, especially since some of that is going toward the Ducati decal on the side. But it’s obviously a very different bike than a budget-minded RadCity or something of the like.

For someone who wants a high-spec’d urban trekking bike and isn’t squeamish about cost, everything I’ve seen makes me think this should be a pretty solid ride.