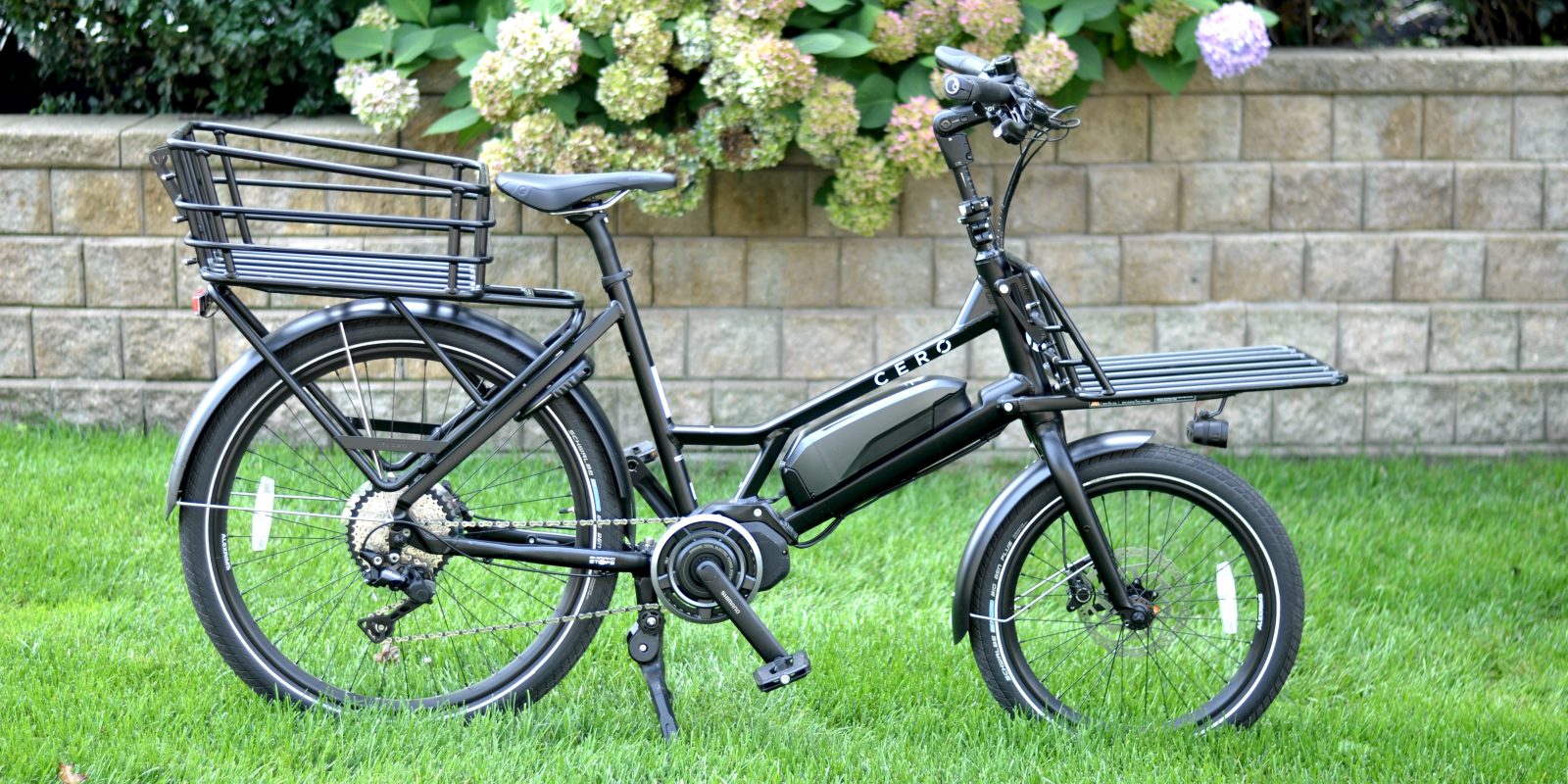 While electric bicycles are becoming increasingly commonplace, electric versions of cargo bicycles are still a rare sight in most cities. But with the convenience of an e-bike combined with the hauling capabilities like your family’s minivan, electric cargo bicycles can be incredibly useful for utilitarian tasks and even as car replacements for many people.

That’s why I was so excited to test the CERO One electric cargo bike over the past few weeks. Having just moved apartments and not owning a car, I put the CERO One through its paces in a number of real world tests.

The CERO One is a surprisingly capable electric cargo bicycle that is more powerful than it looks.

Despite having only a 250W mid-drive, the bike easily powered me and loads of cargo all over the city. And as a reward for its hard work on the pavement, I even put it through some light trail riding too, which is easily handled.

But before we get dive too deep, let’s check out the specs. 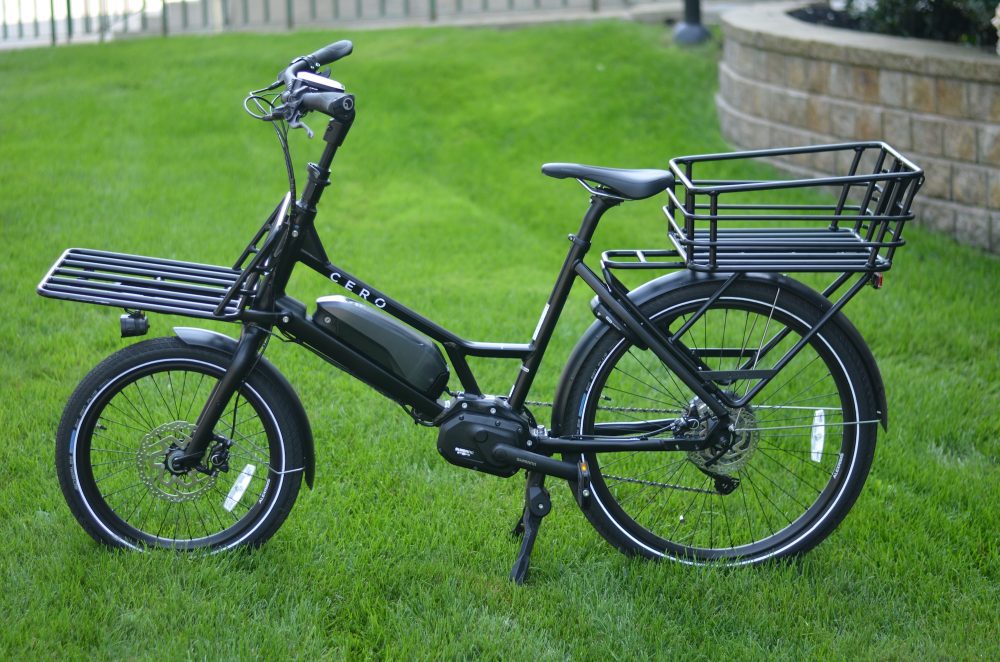 Right off the bat, one of the coolest things about the CERO One is that its cargo system is modular, meaning you can customize it to fit your specific needs.

The front and rear have the same bolt pattern so you can install a number of different styles and sizes of racks provided by CERO, or even child carriers and surfboard holders. Plus, if you’re handy you could even fashion your own custom racks and platforms using the bike’s standard bolt pattern.

That opens up a whole world of possibilities for things you can haul on this bike. We’ve covered how electric cargo bicycles are great for microbusinesses, such as e-bike based ice cream “trucks”, and the CERO One would definitely make the perfect base for vending bicycles. You could build your own setup and bolt it right to the frame of the CERO ONE.

Another cool thing to note is that the front basket is not connected to the fork but rather to the frame. That means it doesn’t turn when the handlebars turn, which would give you super weird steering when you have heavy loads up front. Instead, the basket is essentially part of the bike frame and stays steady in turns and on straight aways. That allows you to connect the front and rear rack holders together, such as in the surfboard holder. I just moved internationally last month, and since I didn’t have a car, I used the CERO One for tons of errands. Moving halfway around the world with just two suitcases means you have to leave a lot of your life behind, and that the first few weeks in your new home will almost certainly involve a lot of shopping.

From grocery shopping to carrying big boxes and other cargo, the CERO One made it so much easier to haul stuff around town and back to my apartment, and I didn’t have to rent a car.

At one point I wanted to pick up some wood from the local home improvement store to build some shelves and a desk, along with some other bits and pieces while I was there. I figured this would be the ultimate test for the CERO. Hauling lumber is generally the job of a pickup truck, or at least an SUV or minivan.

If I had the surfboard rack, I probably could have carried the 8 ft long shelving lumber in one piece. But since those sadly weren’t included with my test CERO One, I had the boards cut in half to at least give me a fighting chance.

The front rack easily held all the smaller bits and pieces that I bought, including some power tools, hardware and shelving brackets. The lumber was a bit trickier, but I found a nice X pattern that fit onto the rear rack. I used tie-down straps to hold it all in place and the CERO One hauled it all like a champ.

Check out the video below to see me hauling 32 board feet (10 meters) of shelving lumber on an electric bicycle.

Surprisingly, I didn’t even work up much of a sweat carrying all of that cargo, despite performing this feat in the middle of August.

Part of the reason the bike makes it so easy to carry cargo is that it has a really well designed mid drive system, the Shimano Steps 6050, which provides pedal assist up to 20 mph. In the highest assist mode, you really don’t have to pedal very hard at all. Also, the assist is instantaneous, with no delay between when you push the pedal and when the motor kicks in to help you.

Some other pedal assist bikes have a few seconds of delay, which doesn’t sound terrible, but makes those first couple seconds of starting from a stop pretty arduous, especially with a full load. But the Shimano Steps mid-drive system on the CERO One uses a torque-based pedal assist system to provide instantaneous power in proportion to your pedaling effort.

The CERO One is rated for a max range of 93 miles, which sounds crazy, but I believe it is actually fairly realistic. You’ll only get that in the lowest power mode, but even in the highest power mode, the longest ride I completed without recharging was 37 miles, which only used half the battery. That means I was getting a theoretical range of around 75 miles in the highest power setting. That’s really impressive for an e-bike, and means you’ll never really have to worry about running out of juice in the middle of a ride.

And if you aren’t lazy like me, you can use a lower power mode and probably get closer to that 93 miles that CERO advertises.

The build quality of the bike is also excellent. It definitely feels like a high quality machine, not a cheap bicycle with a motor bolted on as an afterthought. The frame and baskets are all aluminum, the bike is highly adjustable for different riders, and the wheels includes nice Alex rims and Schwalbe tires, hydraulic disc brakes, and integrated head and tailights that run off the main battery.

The bike even has a super strong double kickstand, important for when you’re loaded up with gear. The double kickstand keeps the bike straight instead of leaning over to one side, and means you can park it like a motorcycle by rocking it back up onto its kickstand.

CERO even paid attention to the small details. For example, not only did they include an Amsterdam lock on the rear wheel, but they even had the cylinders matched so the battery and the lock used the same key, removing the need to carry multiple keys for one bike.

Obviously no e-bike is perfect though. I think the main downside to the CERO is its size. Even with a smaller wheel up front, the bike is a boat. Or maybe a truck. Either way, it’s big. With both a front and rear rack, the bike measures around 70 inches (1. 78m). Maneuvering it into the elevator and around the bike room in my building wasn’t impossible, but it wasn’t easy either. When you’re out on the road, the big size of the bike is awesome. But if you’re squeezing into a tight garage, you’ll want to proceed with caution. Especially since the front rack stays straight when you turn, meaning you’ll want to pay attention that you don’t take out a chunk of drywall on corners.

But hey, I wouldn’t be talking about how awesome the CERO One bike is for hauling things if it wasn’t as big as it is, so there are definitely upsides to its size.

Also, the CERO One isn’t cheap, starting at $2,890. But honestly, with the ability for this bike to actually serve as a car replacement for many people, that price seems quite fair to me.

As someone who hasn’t owned a car in 11 years, I’ve gotten used to making it work on an electric bicycle. Between big cycling backpacks and an occasional bicycle trailer, I’ve always found a way somehow. But now with an actual cargo e-bike, hauling things has gotten so much easier.

I see the CERO One as the type of e-bike that could actually serve as a car replacement for many people that live in urban or suburban areas. It’s not going to solve your interstate travel needs, but it can definitely perform almost anyone’s grocery shopping and general errands around town.

What do you guys think of the CERO One? Let us know in the comments below.