After other leading electric bicycle component suppliers introduced larger batteries last year, Shimano is following their lead with its own set of higher-capacity e-bike batteries.

Two of the new batteries offer 630Wh of capacity, which is around 25% more capacity than the company’s previously largest battery.

That higher capacity combined with the efficient nature of pedal assist e-bikes (Shimano does not offer a throttle option) should result in fairly high range ratings for electric bicycles using the new Shimano system.

While it is up to individual e-bike manufacturers to provide unique range ratings for their e-bikes that use Shimano’s motors and batteries, many will likely claim ranges of over 100 miles (160 km).

For example, a Shimano-powered e-bike that we previously reviewed used Shimano’s old 504Wh battery and came with a maximum range rating of 93 miles (150 km) when using the lowest-pedal assist setting. I completed a 37 mile (60 km) trip using medium to high levels of pedal assist and only drained half of the battery, demonstrating that the 93 mile (150 km) rating is more believable than some might initially think.

You can see that review below.

For those that don’t need the extra range provided by the Shimano BT-E8036 630Wh battery, the new Shimano BT-E8035 offers the same 504Wh as the company’s previously largest battery. The smaller capacity is still enough for most riders, but charges quicker than a larger-capacity battery. This model can be fully recharged in around four hours, according to Shimano.

Both of the Shimano BT-E8036 and BT-E8035 use an integrated design, meaning they nearly disappear into the bike’s downtube.

Shimano’s third new battery, the Shimano BT-E8016, is also a large capacity 630Wh battery, yet mounts externally — usually by sitting on top of the downtube. This format is becoming less popular due to its bulkier appearance, though it has the advantage of giving bicycle designers more freedom for battery placement, including behind the seat tube or in other locations. 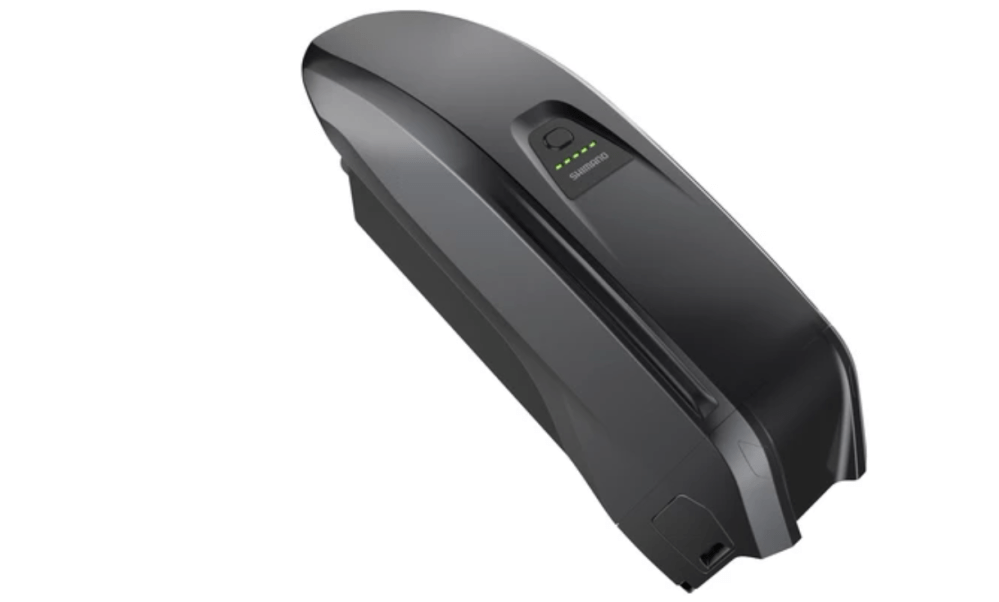 Shimano’s new higher capacity batteries bring the company in line with other battery component suppliers such as Bosch and Brose. Last summer Bosch announced new 625 Wh batteries — effectively the same capacity as Shimano’s new high-capacity packs. Not to be outdone, Brose followed just a few weeks later with its own new 630Wh batteries. Brose’s announcement was particularly interesting, as the company had not previously produced an e-bike battery, instead focusing solely on e-bike drivetrains with integrated motor/controller/display options.

These companies all produce pedal assist-only e-bikes, which means that these large batteries can provide long ranges even when used in higher-power pedal assist levels. For throttle-enable electric bicycles, 500Wh of battery is considered to be more “entry-level,” while 600-700Wh is becoming fairly standard. The largest electric bicycle company in the US, Rad Power Bikes, currently uses 674Wh batteries on all of its throttle-enabled bikes.

While Shimano certainly isn’t going to be reaching those levels anytime soon, one thing is for sure: They aren’t going to let industry heavyweights like Bosch run away with the market. Or at least not without a fight.