Charging hundreds of EVs parked at a condo is a solvable problem, here’s how

Skeptics like to point out that most EV drivers live in single-family homes that make charging easy. And they point to the current lack of charging stations at condos as an impenetrable obstacle to EV adoption. But this viewpoint reflects a lack of understanding of how daily EV charging works.

I recently chatted with Jason Appelbaum, chief executive of EverCharge — the biggest EV charging network you never heard of. He explained several hundred electric cars, all parked in the same condo garage, can easily get their daily dose of electricity.

I bought an EV, and I didn’t even bother to set up charging. I’m an engineer, so I just drove it home, parked it in the space, and said I will solve this tomorrow. That was a very interesting next day.

The next day arrived, and Appelbaum found the electric panel — officially the “meter stack” — in the 39-unit condo’s garage. He discovered a grand total of 50 amps of available power on a single circuit breaker allotted to his condo unit.

The breaker was only sized for my unit. There was no way to add a car charger.

I realized that if I put that charger in, I’m going to take all the available capacity. So out of 39 units, I’m the only one who gets to drive an EV. And I was very confused as to why that was. So I set out on a mission to understand.

Appelbaum reached out to PG&E, the local utility, to explore getting more power to the building. It was physically possible, but the cost could run up to hundreds of thousands of dollars, making it financially impractical. Like a smart engineer, he started running the numbers.

The way I drive my vehicle, I only needed to charge for about an hour and a half each night. I leave at 8 am, and I am in bed before 11. That gives us nine hours to put one and a half hours of charging into my car. That was the basis of the idea of the company: load sharing. And that same idea has scaled beyond my wildest dream.

EverCharge, a private company based in Emeryville, Calif., has charging stations providing service to multi-family dwellings and fleets in 25 states and two Canadian provinces. When I spoke with Appelbaum, he said that EverCharge stations on that day supplied about an average of 10 kWh of juice to probably tens of thousands of cars. He said 500 cars in a single garage would be easy. The company is the default multi-family solution provider for Tesla. You haven’t heard of them because they don’t do public charging.

From this photo, I count about 10 stations at this location: 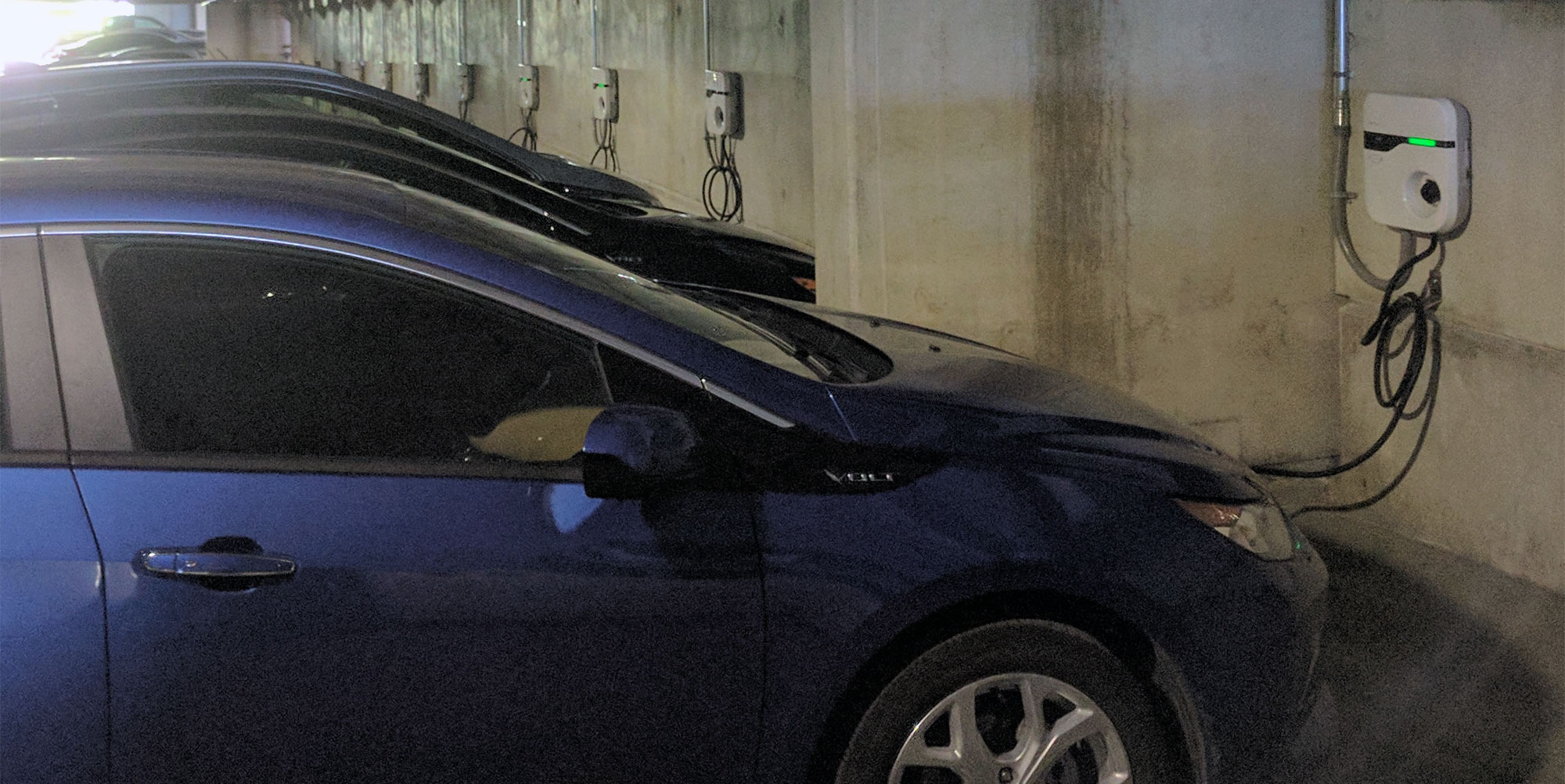 Here’s how EverCharge works. You start with a set number of EV miles or kilowatt-hours necessary to complete the garage’s charging requirements for the day. Based on the dwell time for those cars over a typical day, you have a certain number of hours to deliver those kWh. Then you need to consider the constraint of the building’s power output. From there, work backward to build a system.

The key is that not all the EVs show up in the condo or apartment garage simultaneously. For example, some people stop off at a grocery store or bring the kids to soccer.

Based on substantial data from our buildings, I can tell you that the dwell time is in excess of 16 hours on average. That is first-in-last-out in multi-family buildings.

He explained that many building owners at first want to install charging at 100% capacity for every parking spot, which is unnecessary.

If you charge every single car all at once, you’ll have an entire fleet that is ready at a moment’s notice. Congratulations. Those cars still won’t move until six o’clock the next morning. As long as they meet the end time, who cares how long it took?

Sometimes the current (amperage) in a building has to be increased, but it’s usually minimal. The system takes into account the building’s total load and historic state-of-charge data about the vehicles it has charged. After a few seconds of charging, EverCharge stations can know and utilize the onboard charger’s power capacity in its algorithm.

Appelbaum didn’t want to talk about some details, but the company has relationships with General Motors and likely other carmakers (presumably to pull data from telematics systems). The next wave of power-line communications between cars and chargers will provide an even more direct source of vehicle/battery data.

The EverCharge system also is reading, in real-time, other power usage in the building — such as elevators or industrial exhaust fans. Appelbaum said:

If somebody pushes the elevator button, our system ramps down just as the other systems are ramping up.

In other words, EV charging can dodge the building’s peak demands and the exorbitant “demand charges” it can bring. That doesn’t mean the EV chargers are continually going on and off and on again. The first EV arriving at the garage might immediately get a full supply of power. But when more cars arrive, the load gets balanced and adjusted.

Our goal is to understand normal behavior and design the charging system for 99% of use cases.

While Applebaum loves the engineering challenge, he sees a more significant social and environmental mission for his company, now employing 22 people.

We will end up in a situation where the number of people who can adopt an electric vehicle could hit a wall. And yet, I will always be convinced that we can get substantially more cars into the community owning electric vehicles before we need serious infrastructure upgrades.

We have tons of available capacity, just not necessarily to be simultaneously delivering to every car at 6 pm.

There’s nothing revolutionary about what EverCharge is doing, except that it’s run by a guy who drives an EV and understands that most people only need to charge for an hour or two every night. At the same time, our EVs are commonly parked for more than half the day.

I keep seeing articles about the problem of EV charging for people who don’t live in single-family homes. But I hadn’t put that much thought into it. After speaking with Appelbaum, I see that it’s a solvable problem — at least until every single car in the garage is electric.