Tesla has launched an aftermarket Model 3 spoiler for $800, and now all Model 3 vehicles can improve drag and stability, not just Model 3 Performance vehicles.

When Tesla started selling the Model 3 Performance, it charged $5,000 for the Performance Upgrades Package on top of the $10,000 higher price for faster acceleration.

Funny enough, Tesla didn’t ship Model 3 Performance with those spoilers, and it took months for Tesla to install them after deliveries in some cases.

A few months after launching the vehicle, Tesla also included the Performance Upgrade package for free in the car and ended up offering discounts to early buyers who paid for the package.

Now Tesla has launched the Model 3 spoiler as an aftermarket product that any Model 3 owner can buy for $800: 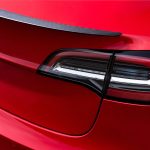 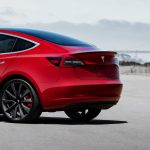 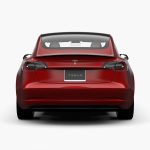 Tesla writes about the product on its shop website:

Improve high-speed stability by adding the carbon fiber spoiler to your trunk lid. Made from lightweight, cross-woven carbon fiber with a matte epoxy finish.

The Model 3 spoiler not only improves stability, but it also improves drag, according to an aerodynamic study from Unplugged Performance, who developed their own Model 3 spoiler optimized for efficiency improvement.

It’s kind of cool that any Model 3 can now get a spoiler and not just Performance Model 3 vehicles.

Are you going to get one?

As part of the Performance package, it was already expensive, but I think it still is as a standalone upgrade even after installation, which is really just gluing it to the trunk.

At that price, I’d probably go with Unplugged’s own spoiler, which is cheaper by $100 and has been optimized for efficiency after they scanned the Model 3 and did some pretty advanced aerodynamic simulations.