What if you could buy aftermarket parts that would improve the drag of your Tesla Model 3 and therefore its range and efficiency — resulting in the parts paying for themselves.

That’s exactly what Tesla tuner Unplugged Performance set out to do and they claim to have the data to back it up.

We reported on Unplugged Performance (UP) on several occasions before for their interesting Tesla modifications, but those were geared toward performance or aesthetics, as most vehicle tuners.

In an interview with Electrek at Unplugged’s headquarters in Los Angeles last month, CEO Ben Schaffer said they wanted to try something new for Model 3 and actually develop products geared toward efficiency instead of performance and aesthetic. Though ideally, they are aiming for a balance of all three.

The ultimate goal was to explore the possibility of developing aftermarket products that improve efficiency enough to compensate for their own cost over time.

In order to achieve that, they hired an aerodynamic expert to 3D scan Model 3 and perform hundreds of CFD simulations to develop a new lip and spoiler for Tesla’s latest vehicle.

Combined with Unplugged’s lowering spring kit for Model 3, the company claims that it results in “a substantial 21% total reduction in drag while improving high-speed stability, balancing everyday functionality and providing an enhanced sporty aesthetic.”

The company released today an interesting white paper diving into how they arrived at that conclusion using the CFD simulations.

The front lip is made of durable impact-resistant polymer and after installation, it ends up within one eighth of an inch of the factory spec ground clearance of the Model 3.

I witnessed the installation of one of those lips at Unplugged Performance shop and it is fairly easy and non-invasive by simply going on top of the existing bumper.

In CFD simulation, UP found a “6.6% total decrease in vehicle drag, further reduces the total drag coefficient by 0.015, and provides a 35.4% improvement in front downforce.”

Based on the simulation, the reduction in drag is just as impressive as the front lip with “a total vehicle drag reduction of 6.3%” and the “rear downforce was increased over baseline by 83.7%.”

They have finalized the development of the rear spoiler only very recently and it has yet to go through its final production phase, but they started taking orders on their website for $695.

Finally, another, more obvious, way to reduce drag is lowering the vehicle, which UP can do with its linear lowering spring set for Model 3 for $365 – $420.

Unplugged Performance explained the results of the CFD testing with the lower suspension heights:

Now I know that those numbers being thrown around are hard to put into context.

Not one for sensationalism, Schaffer has been reticent to speculate about the efficiency gains based on those drag improvements because it is dependent on other environmental factors and speed, but he did come up with an interesting comparison.

Tesla has often talked about how replacing the side mirrors with smaller cameras would result in much-improved efficiency.

For example, CEO Elon Musk said last year that Tesla was looking into the possibility for the next-gen Roadster and he estimated that it would result in about “5% more range at highway speed.”

In order to create a point of comparison, they ran a stock Model 3 without side mirrors into the simulator and it “resulted in a 2.8% total decrease in vehicle drag and a reduction of Cd by 0.006.” 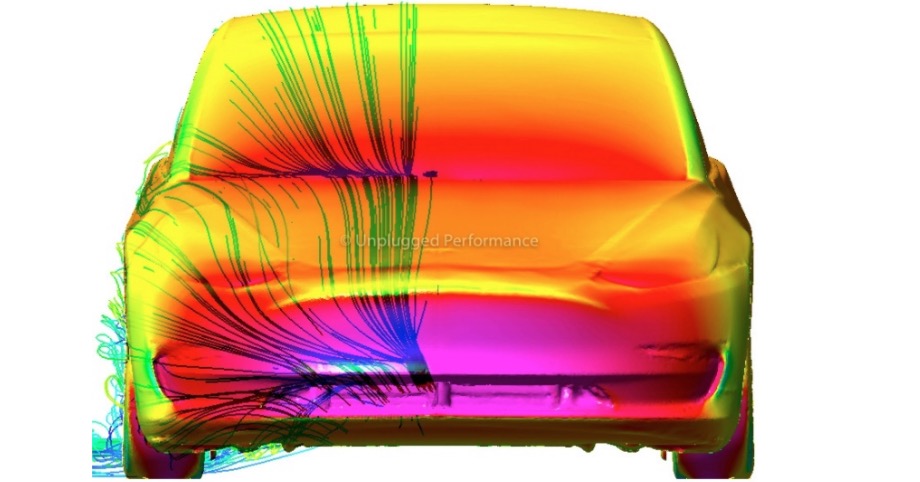 Combining all three mods together, the Model 3’s drag coefficient would be reduced from baseline by 0.049 (from 0.23 to 0.181) and total aerodynamic drag would be 21% lower – obviously much more significant than simply removing the mirrors.

If you have to look at it from a range perspective, UP tried to give an idea of what kind of impact it could have the white paper:

“Based on this model, we estimate that utilizing the front lip, rear wing, and lowering springs will produce 43 miles of additional range (13.33%) at a steady speed of 70 miles per hour, on top of the Model 3’s expected efficiency. When utilized on a Model 3 Long Range Rear Wheel Drive (EPA-5 system rated 325 miles of range) this added 43 miles of range at 70 miles per hour can have significant real-world impact for long-distance driving. In much higher speeds, such as in Germany on the Autobahn, the efficiency gain is estimated to exceed 19% improvement at a top speed of 163mph.”

They also argued that factoring cost per mile of electricity after factoring efficiency gains result in partially offsetting the cost of the upgrades.

You can read the full white paper for more details.

I anticipate that a lot of Tesla fans are going to be skeptical about a small tuner being able to deliver higher efficiency than Tesla, but you need to keep in mind that Unplugged is playing with a different set of rules than Tesla.

They don’t have to deliver an automotive product that needs to be homologated in dozens of different markets.

It’s kind of a brand new way to look at aftermarket modifications.

Instead of focusing on making cars look better or have better track performance, some people are now looking at efficiency modifications.

It’s not exactly the first time we are seeing such an effort. There have been aftermarket wheel covers and other similar products in the past, but I think Unplugged Performance is pushing the idea to a whole new level.