The Apollo Explore electric scooter features a high top speed, big battery, comfortable suspension, and folds for storage. And if that wasn’t good enough, we’ve got a coupon code for you below to get free stuff with the scooter!

But first, let’s check out what makes the Apollo Explore such a great scooter for both work and play.

The Apollo Explore electric scooter isn’t just built tough — the company stands behind the scooter too.

They offer up to a 24-month warranty, which is one of the longest in the industry.

And that’s good news, because with a scooter this fast and fun, you’ll want to ride it hard.

Just check out my video review of the Apollo Explore electric scooter below, then continue reading for all of the juicy details. 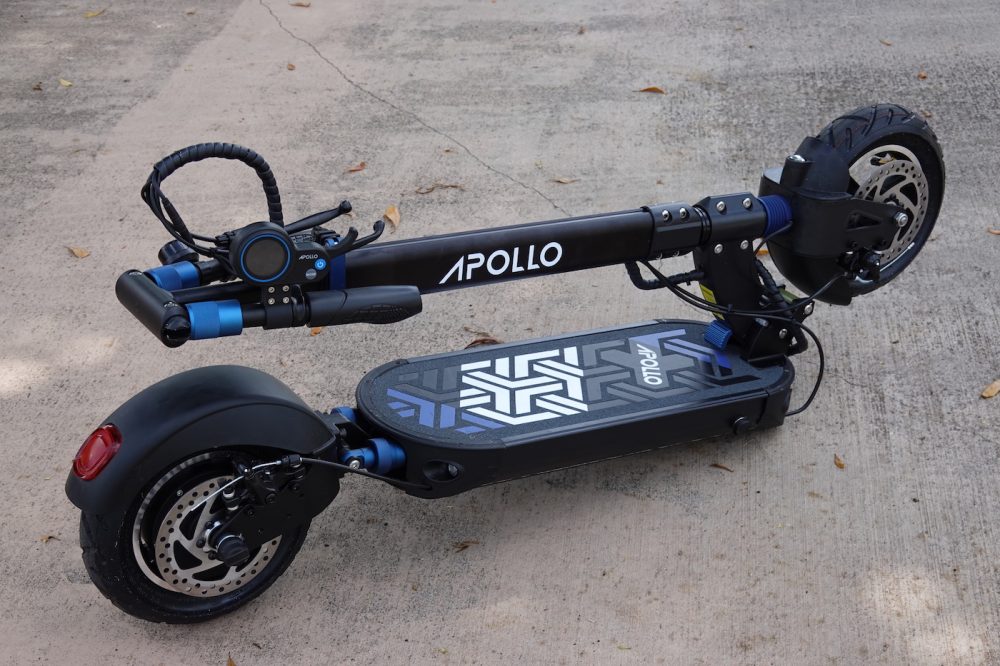 How is the ride?

Oh man, where do I begin? This is a seriously fun scooter to ride. The power is on point, the braking is snappy, and the scooter feels nice and stable, even at top speed.

Speaking of top speed, I frequently broke the 50 km/h (31 mph) claimed speed limit when checking with my phone’s GPS. I often reached 32 mph and occasionally hit 33 mph, all on flat ground. I only weigh 150 lb (68 kg), which might have helped, but suffice it to say that this isn’t a scooter that fails to live up to its claims. It’s also a good reason to wear proper safety gear while riding.

While the scooter is definitely designed for street riding, the suspension is cushy enough to handle shortcuts across the grass or dirt all day. Like any electric scooter with small wheels, you need to be extra careful about divots hidden by tall grass, but at least the 10-inch tires on the Apollo Explore are relatively large, at least in the world of scooters.

Back on the street is where this scooter shines though. The weight is plenty low while the bars are sufficiently high to give you a nice stable feeling, even when leaning deep into turns. And between the power and build quality of the Apollo Explore, I was jumping and ramping my fair share of speed bumps on this thing.

For any scooter intended for hard riding, one area I always scrutinize is the folding mechanism. The last thing you want is to return to the Earth after a glorious half-second of weightlessness only to be met with a self-folding scooter and impending doom. But the Apollo Explore is as well-made as it feels, meaning not once did I feel anything but a solid lock from the folding mechanism. Which is good, because, at 52 lb, the scooter is actually barely light enough to be portable, meaning the folding mechanism is likely to see a lot of use.

Light up the night

Anyone who uses an electric scooter for daily commuting knows that you eventually get caught in the dark. Long summer days mean night riding might be less common now, but if you ride long enough, you’ll eventually find the sun setting before your ride is complete.

Most electric scooters in this price class come with some form of lights. There’s usually a headlight of sorts, sometimes a tail light. Occasionally you’ll see deck lights or stem lights. But the Apollo Explore comes with everything.

You get dual side-mounted headlights plus a central front headlight, along with dual taillights that blink during braking. There’s also under-deck lighting that illuminates the road beneath you as if you’re gliding on an eerie blue cloud. And just like a late-night infomercial: “Wait, there’s more!” You even get an LED strip running up the length of the stem, giving you taller (and bluer) lighting that is easier for cars to see from their elevated and cushy seats.

A full set of lights is an important safety consideration, in my opinion. The Dualtron Thunder also had an impressively visible stem light package, but that scooter also cost 3x the price of this bad boy. So for a scooter priced at $1,249 to have half a dozen independent lights at various heights and colors, I’m pretty impressed.

Ride for miles and miles

At nearly a kilowatt-hour of battery, the 52V and 18.2Ah battery is more than enough for any reasonable commute in the city. I never ran out of battery during a scoot, and I could usually charge just twice a week.

The battery cells are Dynavolt, which doesn’t have the same street-cred as other batteries — like those from Samsung or LG — but the company is well known for making excellent motorcycle batteries. 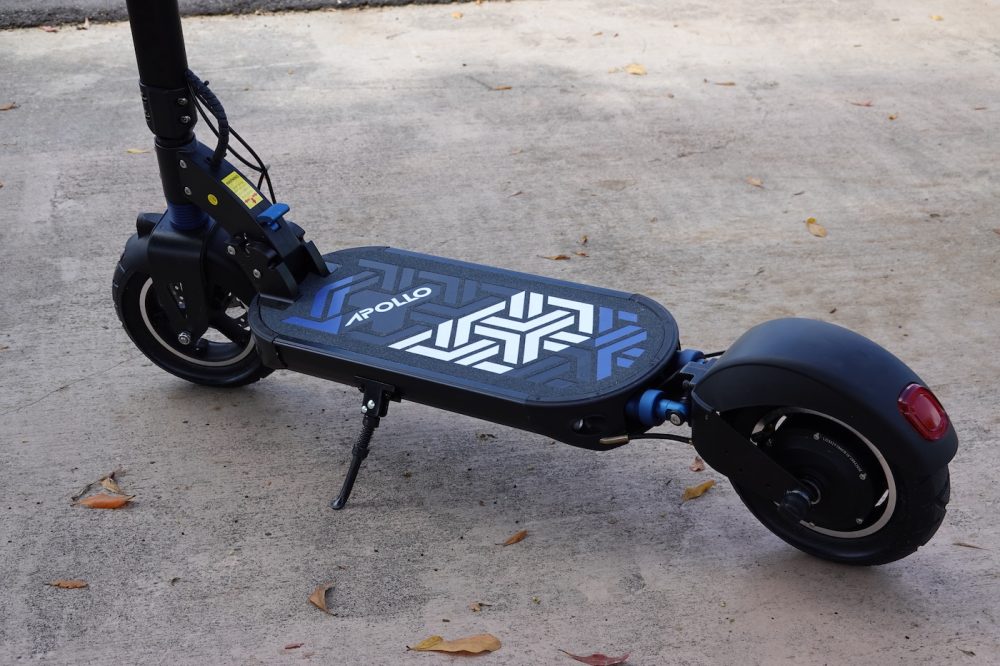 As I mentioned, Apollo offers one of the longest warranties in the business — up to 24 months for many parts (frame, controller, steering, throttle). They’re upfront about the details too. Some components have shorter 12-month warranties (battery, motor, etc.), and customers do have to pay for part of the shipping.

But the Canadian-based company also opened a US service center in New York to more quickly service scooters and get customers riding again.

In the past, I’ve seen some companies with excellent support and service and other companies that basically leave you on your own after the sale is completed. So for Apollo to stand behind their products and provide local service is definitely notable in the industry.

Final thoughts on the Apollo Explore

There are a lot of electric scooters out there to choose from.

If you’ve been riding Bird or Lime scooters but want an upgrade to a faster, more powerful, and more comfortable scooter, this would be an excellent option.

At 52 pounds, it’s not a lightweight scooter. So if you want to carry it up a few flights of stairs every day, think hard about it.

But for a daily commuter with high-quality production (and a rocking light show!), this would be an excellent option.

If you want to grab one for $1,249, don’t forget to use the coupon code ELECTREK to score $100 in free accessories.