Apple adds electric car charge routing to Maps in iOS 14 for BMW, Ford, and other EVs

Apple’s WWDC keynote included some good electric vehicle news today, when Apple announced that they would add EV charge routing into their next update to Apple Maps for iOS 14.

This allows drivers to navigate to a destination and automatically be told where to charge and for how long, simplifying the process of taking a road trip with an electric car.

Electric car drivers have had this capability for a long time, but generally need to rely on inconsistent implementations across various car models.

Various websites and apps exist for this purpose — A Better Route Planner and EV Trip Planner are a couple of them, and PlugShare has recently added a trip planner as well. Tesla drivers have long had the ability to speak or type in a navigation target and the car will automatically route them through Superchargers, telling them how long to charge and warning drivers if they’re driving too inefficiently (read: too fast) to make it to their destination.

Some other vehicles have EV chargers listed in their in-car navigation systems, though these navigation systems are often less pleasant to use than phone-based map applications. They also often just tell you where chargers are, not which ones to stop at and how long to stop there — which is not nearly as streamlined an experience as it should be.

Apple’s update will bring the more streamlined, Tesla-like experience to other car models. Apple is currently working with BMW and Ford to integrate EV routing into maps for their electric car models, and plans to add compatibility with many more manufacturers as time goes on.

Maps will keep track of what car you’re driving and know what kinds of chargers you can use, and route you through the right chargers for your vehicle. It will also take into account elevation and weather, both of which can affect range.

CarPlay will also get an additional “EV Charging” category for charging-related apps. For users who want a more traditional experience of looking for their own chargers rather than having the app route a trip for them, this should prove useful. Or perhaps it will be good for people who are just looking for a nearby charger to their parking spot, who don’t desperately need a charge to make a trip work, but who would like to top up when they’ll be somewhere for a while. 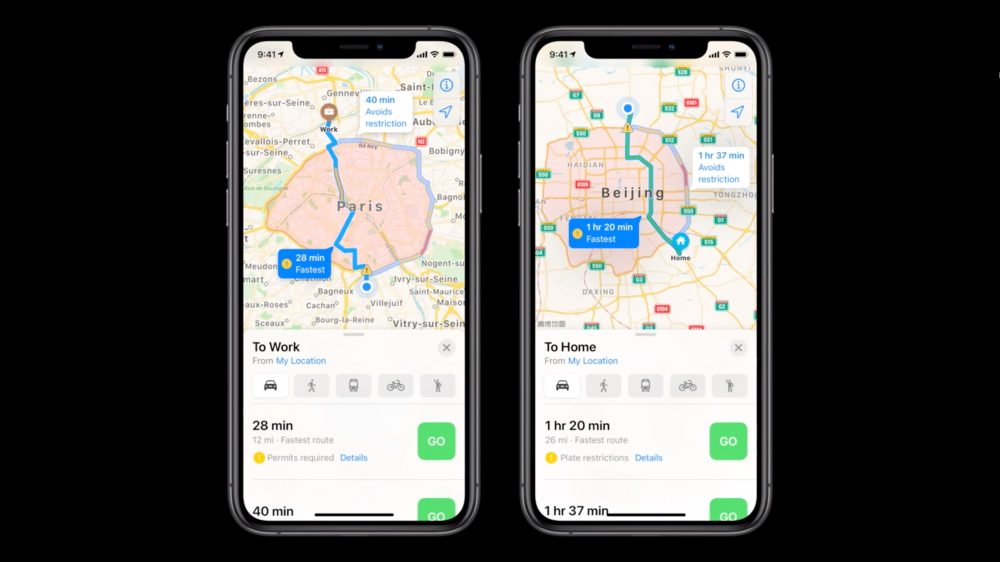 In addition, some cities around the world have implemented “green zones” or “congestion zones” where driving certain types of cars is restricted, or where there is an additional charge for driving cars at certain hours or on certain days. Apple will be adding those zones to Maps so that drivers can be properly routed through or around these areas, depending on their vehicle and preference.  This will also have support for Chinese users, where some cities only allow cars in on certain days, based on license plate numbers.

Finally, Apple is adding a dedicated cycling mode to Maps that will suggest bike routes, in addition to the current “driving,” “walking,” and “transit” modes.

This is a small move but a useful one. People who don’t drive EVs often have a perception that electric car charging is complicated, or that long trips are impossible (they’re not), so anything that can be done to make it seem more “normal” is good for adoption. Being able to tell prospective switchers that they can just plan a trip the same way they would use Apple Maps for any trip, and that the app will do it all for you, will make the switch seem less intimidating.