Riide is one of those Kickstarter electric bicycle success stories, getting their start on the crowdfunding platform in 2015 in order to launch a sustainable e-bike business that has so far lasted the test of time in an increasingly competitive market. After differentiating themselves with a unique lease-to-own option, Riide is now back with their second-generation e-bike, the Riide 2.

The Riide 2 uses a step-through frame and is powered by a rear direct drive (i.e., no internal gears) hub motor rated at 500W continuous and 1.45kW peak.

If that seems like a wide window for a power range, then you’re right. But there’s usually a pretty simple reason for the discrepancy between continuous and peak power ratings. The former is the number that keeps the bike legal in most places. The latter is what you actually feel during acceleration and when flying up a hill. Aren’t e-bike regulations fun?

Anyways, supplying that powerful hub motor is an 840Wh battery rated at 48V and 17.5Ah. It’s not the biggest e-bike battery we’ve seen, but it’s up there near the top. Most commuter-style e-bikes with batteries of this size get ranges of around 35 miles (56 km) on throttle-only operation or around 60 miles (97 km) with moderate pedal assist. You can go even further if you drop the pedal assist into a lower level, or you can do worse if you ride around constantly at the bike’s 28 mph (45 km/h) top speed. And of course range can be affected by everything from rider weight to local terrain to wind direction, so comparing watt-hour ratings is often the best way to compare real-world ranges of e-bikes. 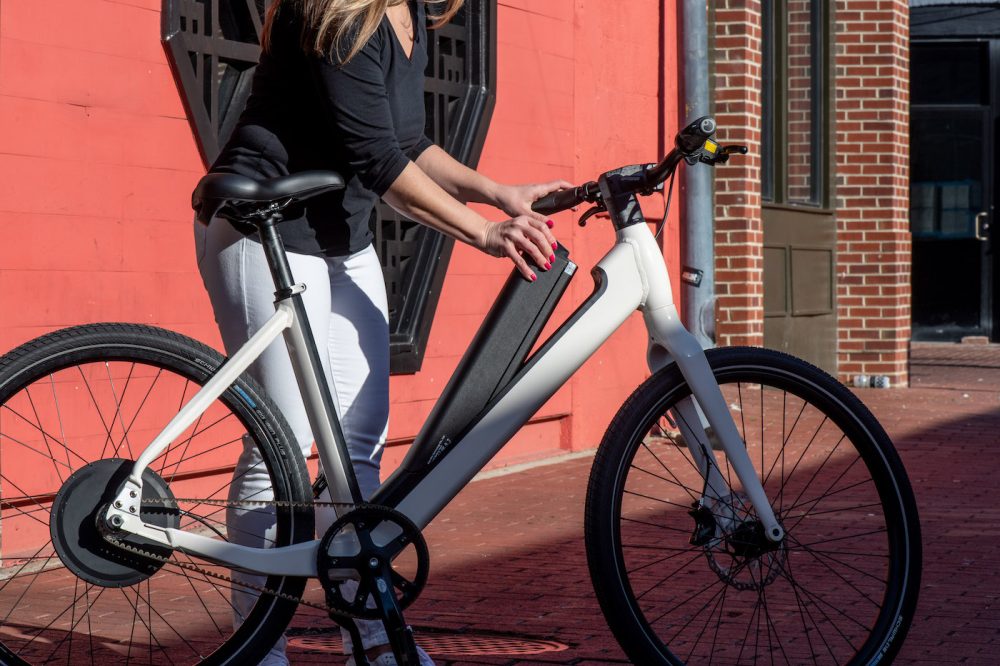 The battery is removable and gets locked into the downtube of the bike, helping improve the lines of the Riide 2 and almost give the impression that it isn’t even electric. Almost.

In addition to an integrated battery pack, there’s also integrated LED lighting in the front and rear of the bike, and the bike’s hydraulic disc brake lines are even run internally as well, maintaining the simple, sleek look of the Riide 2. We’ve seen internal routing for rear brake lines before, but running the front brake line down through the hollow fork arm like the Riide 2 is much more rare.

There’s no shifter cable to hide away on this bike, but not because of wireless shifting. Rather, there’s just no shifting. The Riide 2 is single speed, so don’t expect to drop it into low gear on a hill. Instead, you’ll be happy for that 1.45kW peak motor when the hills start to ramp up. Plus, the lack a multi-speed drivetrain helps keep weight down on the already somewhat hefty 51.9 lb (23.5 kg) bike.

If that single speed design has got you down though, this might cheer you up: The lack of a shifter is due to the inclusion of a Gates carbon belt drive system. Gates is probably the single most respected belt drive manufacturer in the cycling world, and the presence of that belt drive means you not only get a silent ride, but you never have to worry about a greasy chain messing up your cotton Dockers. Between the belt drive and the hydraulic disc brakes, there’s almost nothing you’ll have to fiddle with on this bike. Occasional tire and brake pad changes are pretty much the extent of the maintenance list, and many people can probably get away with that once or twice a year. 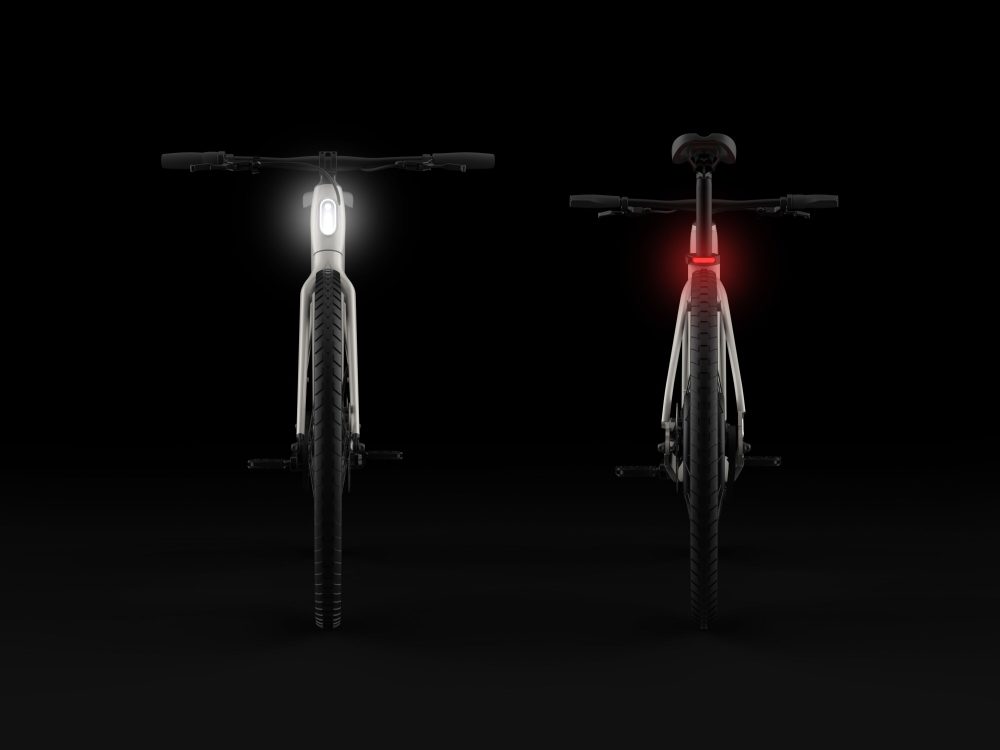 The Riide 2 is also part of a new breed of tech savvy IoT bikes, stuffed full of gadgets and features like built-in GPS, 4G LTE connectivity, Bluetooth Low Energy and a 9-axis accelerometer.

That helps Riide provide a connected and full-featured smartphone app for getting down and dirty with the settings on the bike, plus taking advantage of GPS tracking and other features. 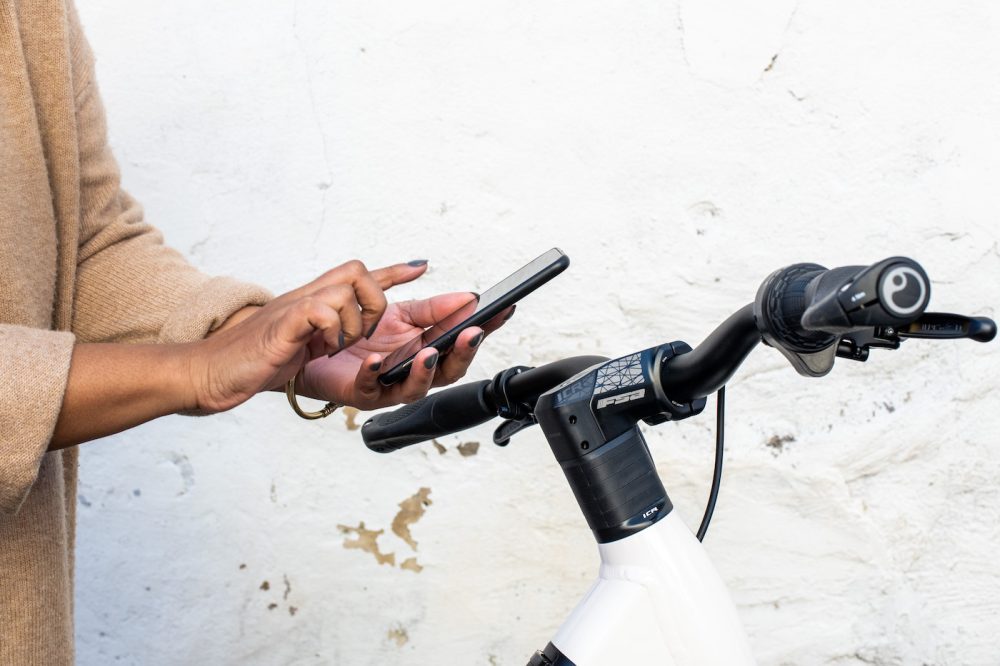 And with a 2.5-year warranty, the bike is protected longer than most e-bikes on the market that come with standard 1-year warranties.

You don’t see this lease-to-own structure in the e-bike industry very much, but I like it. It enables people that couldn’t afford to purchase an e-bike of this quality level outright, but still want to experience a quality e-bike.

Obviously there’s a certain level of financial responsibility required here, but that’s a decision each rider has to make for him or herself.

On the bike side of things, I’m impressed with what I see. Strong direct drive motor, 180 mm rotor hydraulic disc brakes, integrated 840Wh battery, integrated lights, internal brake lines, Gates belt drive, etc. Then you add in that embedded tech like the 4G and GPS, and the $2,799 price starts to look more reasonable. Sure, you can buy other 28 mph e-bikes for half of this price, but they aren’t going to last as long, require as little maintenance, or offer as many features as the Riide 2.

The single-speed nature is definitely bumming me out, but it probably won’t matter much for flatland riders and will only be of marginal impact for riders in hilly terrain, if they let the motor power make up for the lack of low gearing on hills. For riders that want a purist pedaling experience, though, there’s no replacing a multi-speed drivetrain.

The question for you is whether the advantages of that nice Gates belt drive make up for the lack of a shifter.

Let’s hear what you think of the Riide 2 in the comments section below!