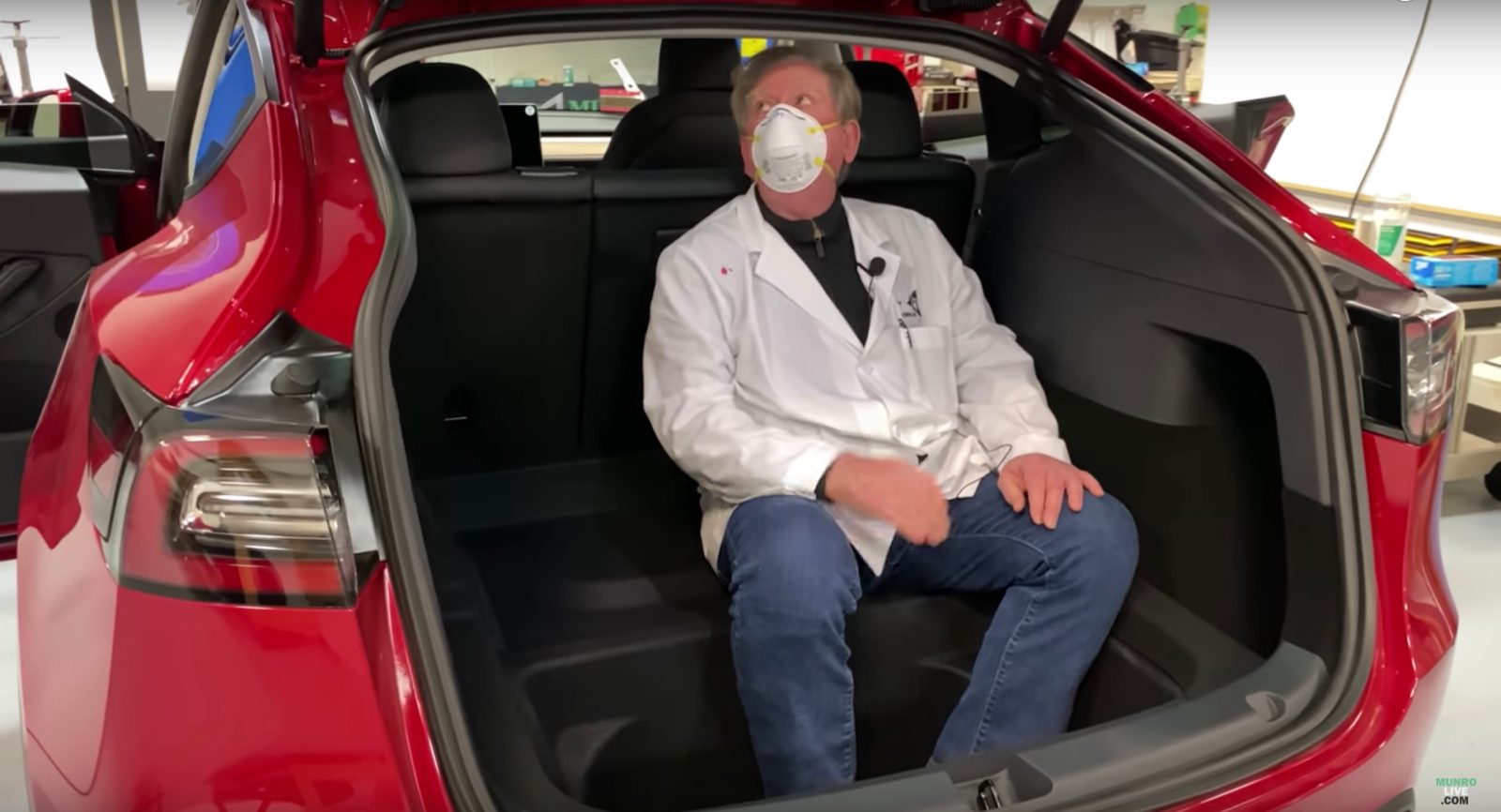 In the latest set of Tesla Model Y teardowns, we see that there is a significant amount of potential human room in the rear area. This is particularly true due to the large cutout underneath the trunk floor, which could offer plenty of legroom to seat adults in the third row… if it were backwards. But will Tesla make its Model Y third row rear-facing like the Model S, or the more traditional forward-facing variety like the Model X? Let’s discuss…

Teardown expert Sandy Munro — who has a whole series of Tesla Model Y teardowns here — addressed the question of the third row in his latest video. Munro, an average height, middle-aged man, took the two closeouts out of the rear of the trunk and seemed to easily climb into a seated position. It appeared as though there was room for another snug adult if the seating was done right, as well as some room for accessories.

Realistically, however, this third row is meant for children most of the time, and it appears that there is even more room in this configuration than in the Model S, which also used to offer (and will again offer) a third row. Anyone over 5 feet tall would have headroom issues in the Model S rear-facing, third-row seat.

Munro said that he thought the third row would be rear-facing. His video above makes a pretty darn good case for it. Up until I saw this, I thought Tesla was definitely going to put a miniature Model X-style, third-row seat in the back.

But looking at this, I don’t even know how a front-facing seat would fit in there. In fact, if I had an emergency sixth or seventh person to transport, I’d certainly recommend that they travel exactly how Munro is sitting.

Doug DeMuro also postulated that a third-row seat would be rear-facing in his very detailed Model Y review below:

Tesla might not actually be thinking rear-facing for the third row if earlier spy shots are to be believed. We’ve seen some forward-facing, third-row seats in the Tesla Model Y prototypes, and let’s just say the legroom will leave most people over the age of 2 wanting.

Here’s another view of the same/similar prototype from the outside:

There isn’t any legroom to speak of, and while there is a drop out, I don’t think there is a vertical foot below the seats for legs. Best-case scenario here is that you could put a couple of child seats back there. I took the liberty of oversaturating that image to look at legroom:

I just don’t see how this works. Not only is there zilch for legroom, but I’m getting claustrophobic just looking at this, trying to imagine the experience. There aren’t even headrests because the seats are almost up to the rear window.

Perhaps in a third-row Model Y, Tesla makes the second row much more cramped to provide more room in the back? Or perhaps we’re just seeing the furthest-back setting for the second-row seats. But this would mean second-row legroom (which is much better than the 3 and better than most competing crossover SUVs) would be compromised anytime someone sits in the third row.

Yet, when Tesla revealed the Model Y, 2 very small gymnast-appearing adults came out of the back seats.

The overwhelming concern with the Tesla Model S rear-facing seats was the perceived issue of safety.

Rear-facing seats are far more safe in a forward collision, which account for up to 90% of all collisions. So statistically, the rear seats made a lot of sense. And they were even safer with their 5-point harnesses. I doubt there was a safer place in any car than the rear-facing seats in a Model S as long as the collision was forward.

However, the possibility of getting rear-ended mere feet away from children’s legs and bodies would likely put some potential buyers off.

Tesla reassured customers that by adding another layer of reinforced bumper to the rear of the car, it could withstand the Model S getting rear-ended by a semi at highway speeds. Luckily, as far as we know, a Tesla Model S with rear-facing seats was never rear ended to the point where the rear passengers were impacted.

The forward-facing seats, above, on the other hand, look like they would be extremely hard to get out of in the event of an accident.

While facing the rear may give some folks motion sickness, the alternative as far as I can see is facing a middle row of seats and not being able to see beyond that. The side windows in the rear are cramped at best. However, the Model Y ceiling is transparent glass, which would give some relief.

As a Tesla Model S owner from 2013 to 2017 with the rear-facing seats, and then a Model X owner with the third row from 2018 to this year, I feel like I’ve got a pretty informed point of view on this.

Although my two kids were smaller when we owned the Model S,  they preferred it much more than the third-row Model X, which is hard to get into and much more claustrophobic in the far back. Usually they just sit in the middle unless friends are joining us for a ride.

(In the first picture, the kids are 2 and 5 years old, and in the second picture, they are 9 and 6 years old.)

They also considered the Model S rear-facing seats “their area,” and it was stockpiled with books and other activities (and sometimes snacks, but I wouldn’t recommend it). This was great for us because they could destroy the rear area while leaving the front and middle of the car clean for us and our adult friends. As they got older (6 and 9 years old), they started to get too tall for the rear seats, and their faces were too close to the glass. But with the taller Model Y, I think they could eke out another few years back there. Or more realistically, I could separate them and put the oldest in the middle and youngest in the back so that they stop fighting already.

The downside to the Model S rear seats is that it would get hot in the back and there wasn’t adequate ventilation to the rear of the car. And of course, there was always the concern that someone that was on their phone or inebriated would rear-end us.

So I’m personally voting for rear-facing third row. How about you?