Climate Crisis Weekly: This couple grew a forest in India, and tigers came 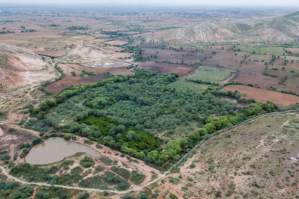 Aditya and Poonam Singh love nature and wildlife. In 1998, Aditya, a civil servant in Delhi, and Poonam, an artist, moved to remote Rajasthan. They bought land next to the Ranthambore Tiger Reserve and allowed forest to grow back.

Aditya became a photographer, and he and Poonam opened a tourist resort. Aditya said [via the World Economic Forum]:

I just bought this and did nothing to it except removing the invasive species. We allowed the land to recover and now after 20 years it has become a lush green patch of forest which is frequently visited by all kind of animals, including tigers, leopards, and wild boars, throughout the year.

Money was never the consideration. It is just about my love for nature and wildlife. Instead, these days I am getting queries from people across India who want to replicate a similar model in their state.

The Singhs closed down the tourist resort in 2019 and are planning to open a new home and homestay, which will run on solar and wind power. You can see the amazing rejuvenated forest and its wildlife in the video below. Sometimes, letting nature run its course can achieve incredible things:

In January, my colleague Charles Benoit wrote about how New York City has started to crack down on idling ICE vehicles with fines. In fact, New York even has a bounty program for reporting offenders:

But I guess the Big Apple didn’t feel bounty hunting was enough of an incentive, because they’ve brought in the big guns in the form of ’80s rocker Billy Idol. (Idol. Idle. Nice one, mayor’s office’s comms department.)

Idol’s face is plastered all over the city this month, on billboards, kiosks, and taxi TV screens, declaring with a rebel yell (sorry), “Don’t clog our lungs with your car fumes!”

Listen. I like Billy Idol in his own right. And all joking aside, air pollution is killing us. So, kudos for creativity, and good job, New York, for driving the message home with a bit of fun. New Yorkers, you don’t want to make Billy mad and report you for a bounty, do you?

You can see Billy doing his thing in the video below.

The World Environmental Conservancy reported this week that February 2020 was the warmest recorded month at the US’s McMurdo Station in Antarctica since 1967.

The average temperature at McMurdo was 5.6C (42F) the highest monthly temperature of the last 53 years. On February 9, the temperature reached 9.9C (49.8F). 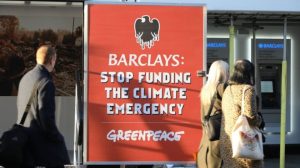 On Monday, Greenpeace blocked almost 100 Barclays bank branches in the UK after the environmental organization shut down the entrances by supergluing the locks and nailing the doors shut.

Greenpeace protested on the grounds that Barclays is the biggest fossil-fuel funder in Europe, and it wants the bank to channel that money into green energy instead.

Banks are just as responsible for the climate emergency as the fossil fuel companies they fund, yet they’ve escaped scrutiny for years. We’ve shut down branches across the country to shine a spotlight on Barclays’ role in bankrolling this emergency. It’s time Barclays pulled the plug and backed away from funding fossil fuels for good. 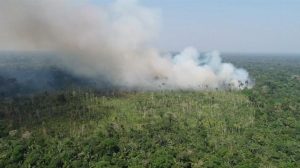 A new study published on Wednesday in Nature states that tropical forests are absorbing less carbon dioxide, increasing the possibility of climate breakdown. The study tracked 300,000 trees over 30 years in Africa and the Amazon (pictured right).

Instead of being an emissions absorber, the Amazon rain forest could become a carbon dioxide producer, due to deforestation as a result of logging and farming. So we can no longer count on the tropical forests to clean up our emissions.

Simon Lewis, professor in the school of geography at Leeds University and a senior author of the research, said:

There is a lot of talk about offsetting, but the reality is that every country and every sector needs to reach zero emissions, with any small amount of residual emissions needing to be removed from the atmosphere. The use of forests as an offset is largely a marketing tool for companies to try to continue with business as usual.

Greta Thunberg gave a speech to members of European Parliament on Wednesday as the EU unveiled a proposed law for reducing carbon emissions. Thunberg says the law doesn’t go far enough. She accused the EU of “giving up,” and also said, “Nature doesn’t bargain, and you cannot make deals with physics.” She was met with applause.

You can watch her speech below. Regardless of how you feel about her personally, listen to what she says. The EU’s parliament did.

Hey, Americans, remember Woodsy the Owl? He’s been around since 1971, when the USDA Forest Service brought him to kids with the slogan, “Give a hoot, don’t pollute.”

Woodsy may be 49 now, but he’s more relevant than ever. In 1997, he was given a new slogan, “Lend a hand, care for the land!” He invites children to renew, reuse, and recycle. He also encourages the stewardship of natural resources.

“Made for Michigan” apparel company The Mitten State sells a Woodsy the Owl T-shirt, and they donate a portion of the proceeds (the T-shirt costs $29.99) to the US Forest Service. (No, I am not officially promoting this, nor do I get anything out of it; I just really want one for myself.)

Kids around the world are grasping this concept as demonstrated by the #fridaysforfuture movement. Perhaps Woodsy needs to make a visit to Washington, DC, to remind lawmakers that they also have a responsibility for the stewardship of our natural resources. I’m guessing Woodsy isn’t a fan of fossil fuels or drilling on protected lands that threaten his buddy, the sage-grouse.