Laws against idling vehicle engines have been around for decades. However, enforcement has generally been lax or nonexistent. But now New York City and the District of Columbia are changing that by enlisting residents in the battle against vehicle emissions. NYC even has a generous bounty program where you can make thousands of dollars in your spare time.

The “no enforcement” status quo

Toronto passed an idling control bylaw in 1996 to help reduce air pollution. But the city does not appear to take it seriously. Residents can call Toronto’s 311 to complain, but the remedy, according to the city’s own idling complaint web page, is: “A bylaw Officer will attend and issue a notice and an information brochure to the offender.” While the law does allow for a fine, according to the CBC, Toronto issued idling warnings to about 2,000 people in 2018, but not a single ticket.

Palo Alto, California, passed an anti-idling ordinance that would apply to all vehicles (not just commercial) in 2018, but also adopted the “brochure-in-lieu-of-penalty” strategy. According to the Mercury News:

The issue was sparked last June when residents complained to city officials about the pervasiveness of idling vehicles in their neighborhoods, including Facebook CEO Mark Zuckerberg’s private security detail stationed outside his personal compound in Crescent Park.

Without any enforcement built into the ordinance, it acts chiefly as a tool to discourage drivers from idling their vehicles. The city is creating informational cards stating that idling is prohibited and explaining the ill effects of idling and the fuel benefits of turning the engine off.

The council, which unanimously voted in favor of the anti-idling ordinance this week, expressed concerns that it would prove too difficult for police to enforce, or even for the city to keep track of how many violations each offender had accrued.

The City of Palo Alto’s Police Department responds to over 60,000 calls annually, so it is unclear why the city council did not have faith in its police department.

For commercial vehicles, the California Air Resources Board (CARB) maintains an online complaint form. But CARB doesn’t have its own police force.

In New York City, if you report an idler and they’re found guilty, you get 25% of the fine, which ranges from $350 to $2,000. This started in February 2018, largely thanks to the efforts of George Pakenham, a Wall Street banker and part-time clean air activist living on the Upper West Side. Pakenham was the subject of the 2012 documentary film Idle Threat: Man on Emission (YouTube link). In that movie, he explains that while New York had an idling ordinance that goes back to the 1970s, it was considered a “moving violation,” meaning only police could enforce it, not parking inspectors. Pakenham, with help from the New York Environmental Defense Fund, was successful in getting that changed, so the city’s army of parking inspectors could help with enforcement. The movie predates the bounty program.

Pakenham told VICE News in March 2019 that he had made 120 complaints and pocketed $9,000. New York City maintains a detailed website for its “Citizens Air Complaint Program,” where you can create an account and begin submitting complaints online.

While D.C. doesn’t offer a bounty yet, the city has streamlined citizen enforcement against commercial vehicles through its main 311 app, used to report everything from potholes to rodent issues. The main threshold is the same as NYC’s: Complaints can be made against commercial trucks, buses, and vans. Electrek tried out the D.C. app and was impressed with how easy it was for residents to complain: 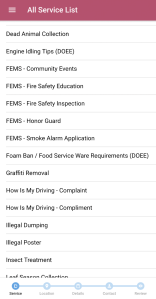 The instructions are as follows:

The D.C. government isn’t just relying on citizen reports. Last month, D.C. attorney general Karl Racine filed a lawsuit against Greyhound seeking $216,000 in idling penalties, as well as costs for his office’s investigation. Over the course of five days, investigators documented 50 Greyhound buses idling for over three minutes in violation of the law. D.C. authorities sent 50 notices of violation, but when investigators returned months later, the idling was still happening.

George Pakenham is a hero. His focus and commitment is inspiring. And it’s reassuring to see examples of civic activism working.

I have to admit to some mixed feelings about the larger picture here, where drivers are getting caught between the need for clean air and fleet operators’ desire to maximize their own short-term ROI. In colder climates, if someone’s idling their vehicle while sitting in it, they’re probably trying to stay warm. (Not since cars did away with carburetors has idling been a worthwhile thing for engine optimization.)

I support the bounty program and any measure to reduce engine idling for all the important reasons, and think/hope that fines will mostly hit fleet operators, not drivers. It’s just unfortunate that, in non-temperate climates, this comes at drivers’ personal comfort. I spoke with a driver for a large drinks company; that company has their trucks set to automatically shut off the engine precisely at three minutes of idling. That makes drivers’ working environments much less comfortable when it’s below freezing outside.

I’d much rather see an excise tax on ICE delivery trucks sufficient so that fleet operators make the upfront choice to go electric and provide a healthier and safer environment for the drivers and the rest of us.

But if it’s nice out, let’s go bounty hunting 🙂