Croatia-based TORP has been hard at work developing a powerful electric motorbike that could combine speed and agility in a single vehicle. Now the company is ready to show off their creation, the TORP Bike.

I don’t know what’s in the water in Croatia, but it’s somehow helping them pump out high-performance, homegrown electric vehicles.

Whether it’s a four-wheeled electric supercar or a two-wheeled high-performance electric bike, Croatians have some serious high-power EV street cred.

And so it’s not exactly surprising that the new TORP Bike is a high-performance machine in its own right.

With a 15kW (20hp) peak rated electric motor in a 29 kg (64 lb) e-bike, the TORP Bike has a pretty insane power-to-weight ratio. The design also features very low mounting points for the battery and motor, lowering the center-of-gravity on the already lightweight bike. And with an 80 km/h (50 mph) top speed, this is not a low-speed off-road crawler.

The 1.8kWh removable battery pack is said to give around 2.5 hours of “hard off-road riding.” While I’d love to get a mileage/kilometer figure there, many electric dirt bikes and trail bikes are rated in riding time instead of distance, as it can be more relevant to the type of riding expected. Either way, 2.5 hours of riding time on a 1.8kWh battery assumes around 750W continuous power draw — not exactly a very high figure.

The custom-designed battery weighs in at only 8 kg (17.6 lb), which makes it one of the most energy-dense removable e-motorbike batteries I’ve ever seen. A similar-sized battery in another light electric motorbike I owned weighed around double that much. 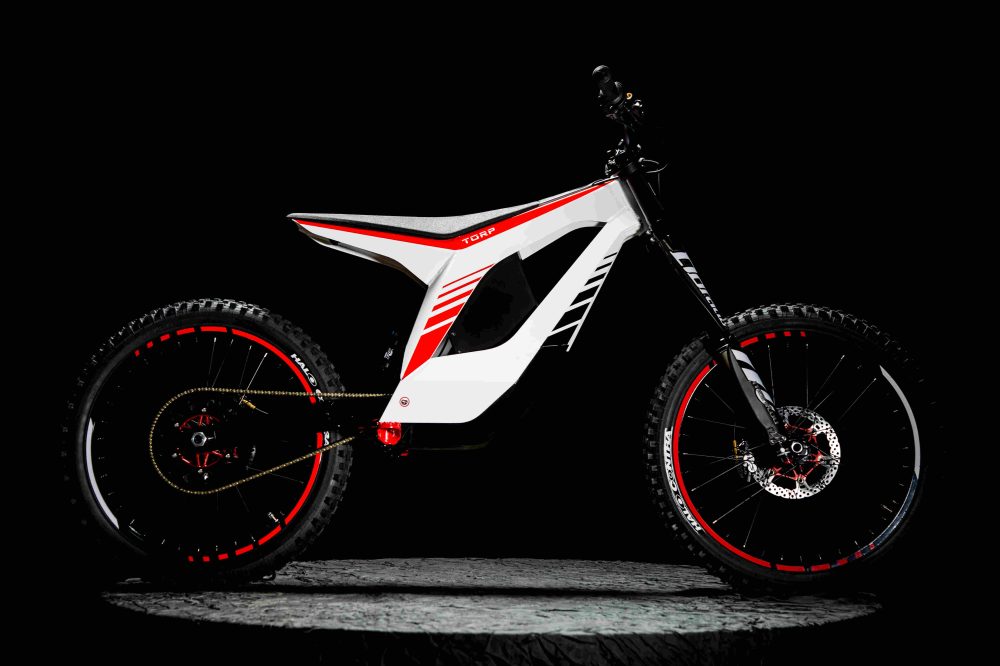 Much of the bike was designed in-house, including the creation of a custom Battery Management System (BMS) and electronic speed controller.

Designed to meet the needs of both of TORP’s founders, the TORP Bike apparently excels at multiple types of riding. Cofounder Teo Žikić enjoys stunts and bike tricks while his fellow cofounder Damir Šarčević prefers speed. As the story goes, they decided to create something that they could both enjoy. And out popped a bike that was light enough for performing stunts while still fast and robust enough for the racing world.

In fact, Damir’s previous racing experience has been largely centered around gas-powered motorbikes. Developing the TORP Bike has been an interesting challenge for him, but one that was worth it based on the advantages he sees in electric vehicles.

As Damir explained in a statement provided to Electrek:

To be honest I was riding enduro more often before I started working on the Torp Bike. Before building the first prototype of our e-bike, I was sure there is nothing I really miss in my internal-combustion motorcycles. But working on Torp e-bike was an eye-opener: I realized all the possibilities e-motorcycles have, compared to their classic counterparts. The biggest advantage I see is how fast the bike responds and how it always has all its power at the disposal. When riding a regular dirt bike I often find myself in a situation when I am in the wrong gear, and thanks to that I can’t cross a certain obstacle.

I think that Torp Bike has the potential to start a whole new discipline in biking. Due to its low weight and how easy it is to control, it is simple to learn new skills with it that can be used on most electric and internal-combustion motorcycles. The precision of the electric motor enabled us to implement a ‘wheelie control,’ a feature that with the help of gyroscope and accelerometer assists with riding on the rear wheel. The electric motor is also quite silent, so the bike can be ridden in the neighborhood, without bothering the neighbors.

The TORP team is beginning with a small production batch and is now accepting pre-orders on their site. The TORP Bike is priced at €7,000. While not cheap, that price puts it in line with many other offerings in the industry.

What do you think of the new TORP Bike? Let us know in the comments below.