The Tesla Model 3 extended its dominance over the California auto market last year, selling more cars than all other EVs combined in 2019, according to the California New Car Dealers Association. In addition, when removing other Tesla models from the count, the Model 3 sold more than twice as many cars as all other manufacturers’ EVs combined.

This made the Tesla Model 3 the third best-selling car overall in the state behind the Civic and Camry. This result is a move up from fifth place last year.

The California New Car Dealers Association released their quarterly (and ’19 annual) report last week with a lot of interesting data (collected by IHS) about the auto market in California and the US overall.

Mostly, trends that have been apparent for the last few years have continued. Tesla continues to do well, though it’s now the Model 3 that’s leading the market instead of the Model S.

In prior years, the Model S dominated its segment, but sales have slowed after the Model 3 came out. It remains in third place among luxury and high-end sports cars, behind the 5-series and E-class, but its share of that segment dropped from 15.2% in ’18 to 10.4% in ’19.

The Model X fell from 2nd to 4th place among luxury mid-size SUVs, though its share only dropped from 9.6% to 7.8%.

In the overall EV market, there was a bit of a reversal of trends. Last year, EVs outsold conventional hybrids for the first time. Hybrids are back on top this year, ticking up along with a downturn in plug-in hybrids. 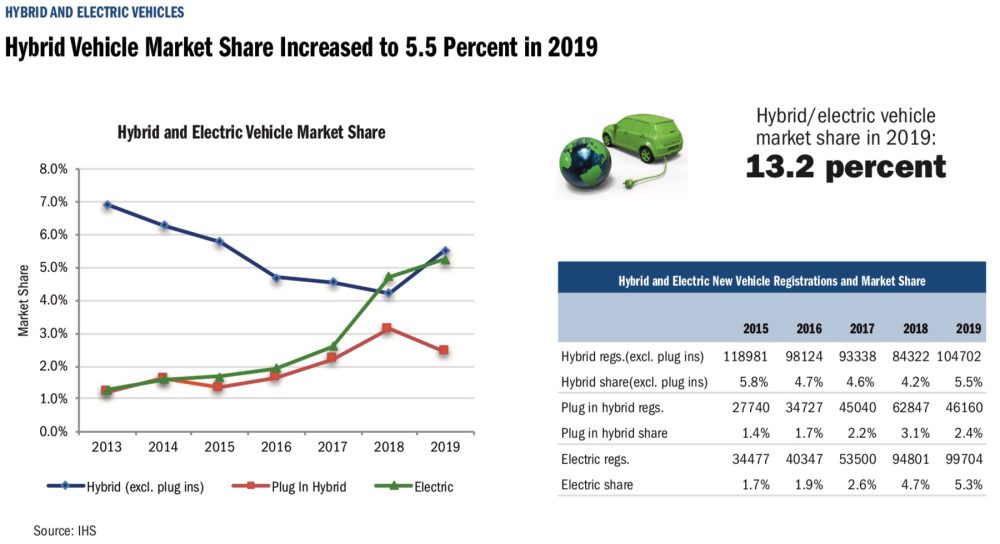 The total amount of “electrified” vehicles continued to grow to 13.2%, up from 12% last year. This is good progress and keeps California among the largest EV markets in the world, behind the Nordic countries. It’s still a far shout from Norway, where a majority of new cars had a plug last year.

So Tesla is doing great in the segments it’s competing in, but since they only sell three vehicles and the EV market is still small overall, this gave them a 3.8% market share in California overall, which put them in 8th place just behind Subaru and ahead of BMW.  Respectable, but not dominant.

Tesla’s market share in the whole US is just 1.1%, so they’re doing almost four times better in their home territory of California than they are across the US.  But Tesla sales grew 10.1% in the US overall last year, and just 3.3% in California. These growth numbers are lower than typical for Tesla, primarily because the Model 3 started its international expansion last year, so much of production was diverted overseas.

And notably, Tesla is not in the best segment for auto sales right now. While EV sales are growing, new car sales overall are down. Particularly, sedans are down, and the most popular cars today are small SUVs.

Nearly a third of California auto sales last year were in the non-luxury SUV segment, and another 11% in luxury SUVs. The total market for SUV-style cars is about double the market for sedans.

We’re not sure if the Model Y will be classified as luxury or not, but given the Model 3’s dominance in a smaller segment, this suggests that Tesla will be able to sell as many Model Ys as they can make. The Model Y hits the market next month.

As is our usual refrain here, this is good news, but it’s not enough. Every gas car sold today will continue polluting the air you breathe for the next 10 or 20 years. We’re still not even at 10% total sales of cars with plugs, which means 90% of new cars still spew poisonous exhaust.

Despite good progress and leading the US in EV sales, California is not meeting its own goals and is going to have a hard time going carbon-neutral by 2045 unless new car sales start being 100% electric very soon.

So, good for California and Tesla, but we need more. Non-Tesla EV sales aren’t rising fast enough. This is largely the fault of other manufacturers not being serious enough about selling EVs, and the fault of government, even in California, not properly disincentivizing pollution (and even working to incentivize it on the federal level).