Volvo Trucks has launched a pilot program in California that brings several of their new all-electric VNR class 8 heavy duty trucks to the road.

The company invited us out to Fontana speedway yesterday for some more insight into their program.

The truck came about as part of Volvo’s “Low Impact Green Heavy Transport Solutions” (LIGHTS) project. The project is a cooperation between Volvo, the California Air Resources Board (CARB), South Coast Air Quality Management District (AQMD), and other public and private partners.

The point of the event in Fontana was to get us up to speed on what Volvo has been doing with the program since its first teaser in December 2018 and what electric offerings we can expect from Volvo in the future.

Volvo’s prototype trucks will be used to haul goods from Long Beach, home to the busiest ports in the US, to distribution hubs in southern California’s Inland Empire. Trips are about 70 miles in each direction.

The Inland Empire has seen huge job growth in logistics over recent years, and is quite a busy hub for distribution due to its proximity to the aforementioned ports but relatively cheaper real estate prices. It also happens to be in a valley that has been plagued by air quality issues, and several targeted incentives exist to reduce pollution in the region. Longtime residents remember when there was so much smog that it was impossible to see the mountains surrounding the valley. 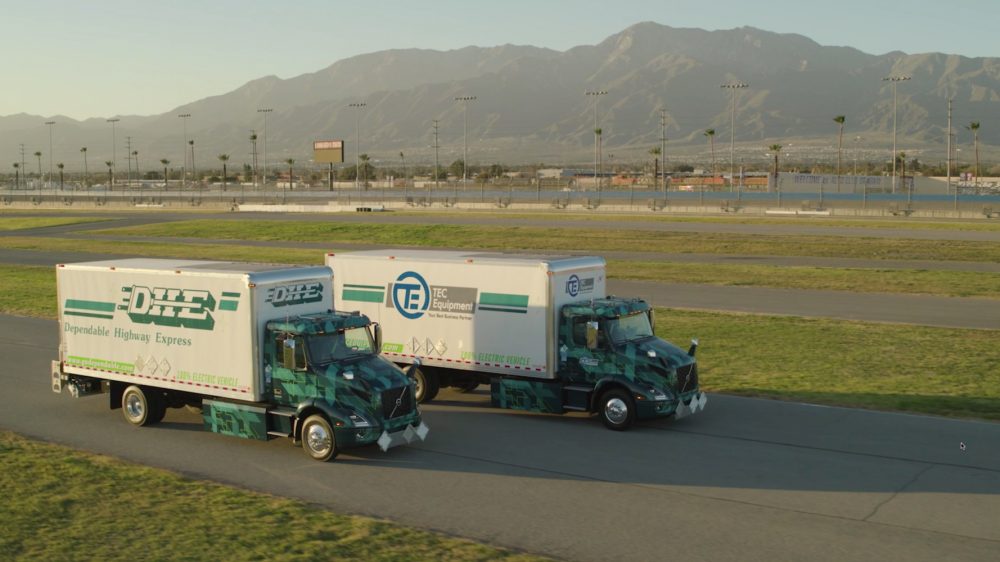 Along comes the idea of electric trucks, which CARB and AQMD are quite interested in to help mitigate local air quality issues. This is why they’ve contributed roughly half of the total $90 million pilot program cost. This money comes mostly from California’s cap-and-trade fund.

Volvo invested $36.7 million into the pilot program, and is also doing $400 million in upgrades to their facility in New River Valley, Virginia, mostly for general factory upgrades, but also to prepare for electric vehicles.

The Volvo VNR electric trucks will be available in multiple configurations with a battery size of 200-300kWh. This should result in a range of 75-175 miles depending on load, road conditions, and many other factors.

Data will be collected from these initial journeys to help inform Volvo about how they can improve their offerings.

The project also includes other pieces of all-electric equipment. Electric forklifts will be used to load and unload the trucks, and electric “yard goats” will be used to move trailers around within cargo yards.

Many of these pieces of equipment have been designed to allow technicians to get up to speed on their maintenance and use them as quickly as possible. Volvo has partnered with local colleges that offer training courses for electric vehicle technicians.

Rather than being rebuilt from the ground up, they’ll use relatively standard equipment and spare parts to more easily integrate these trucks into mixed fleets, as fleet operators are unlikely to shift an entire fleet over in one fell swoop.

The VNR electric, for example, put the power electronics in the space normally taken up by the engine. Volvo put the batteries beneath and behind the cab along the sides of the truck. The motors are in between the battery packs, mated to a standard driveshaft. Volvo thinks this will be more reliable than individual wheel or axle motors.

Currently, Volvo is still in the testing phase of this program, having only rolled out a few trucks over the course of the last few months. The VNR electric only started development about a year ago, so having working prototypes on the road already, especially in an industry with quite long development times, is very impressive.

In total, they plan to test about 50 pieces of equipment through the LIGHTS program, largely through Dependable Highway Express and NFI, two large California freight companies.

Volvo hasn’t released pricing and is still being vague about current and future specs, despite the presence of many fleet buyers at the event, which Volvo was trying to woo. There will be significant incentives available for the purchase and use of these trucks in some jurisdictions.

They do, however, have a release date: They’ll produce limited volumes in late 2020 (hmm…). That’s right, by the end of this year, you’ll be able to buy an electric heavy-duty truck from Volvo.

We’ll have more insights from the event, including first drive impressions, in the next couple days. Stay tuned!