Tesla’s plan for a new air suspension for Model 3 has leaked in an update to its parts catalog. It’s something that Tesla has been talking about adding to Model 3 in the past, but the plans have been delayed.

For Model S and Model X, Tesla developed a “Smart Air Suspension” option, which eventually became standard in both models.

Add the ability for your Tesla to adjust vehicle height for better handling, efficiency, and ride comfort. Using the touchscreen, you can raise or lower your vehicle when entering a steep driveway, navigating snow, or unloading passengers and belongings. Using GPS location detection, your Tesla will remember and reapply settings automatically.

When launching the Model 3 in 2017, CEO Elon Musk said that the new suspension would launch six months later with the dual motor version of the car.

But at the time, Tesla ran into a lot of problems ramping up Model 3 production, and a lot of versions of the car were delayed.

The dual motor version didn’t launch until almost a year later, and it didn’t come with air suspension, though Tesla was working on the feature.

In 2018, a Tesla Model 3 with dual motor and air suspension was spotted on a racetrack during testing, but nothing came out of it.

Last summer, Musk confirmed that air suspension wasn’t in the plans for Model 3 “at the time.”

Six months later, it looks like it might now be back in Tesla’s plans since a new writing harness for a ‘Model 3 AWD Air Suspension’ has been added to Tesla’s parts catalog: 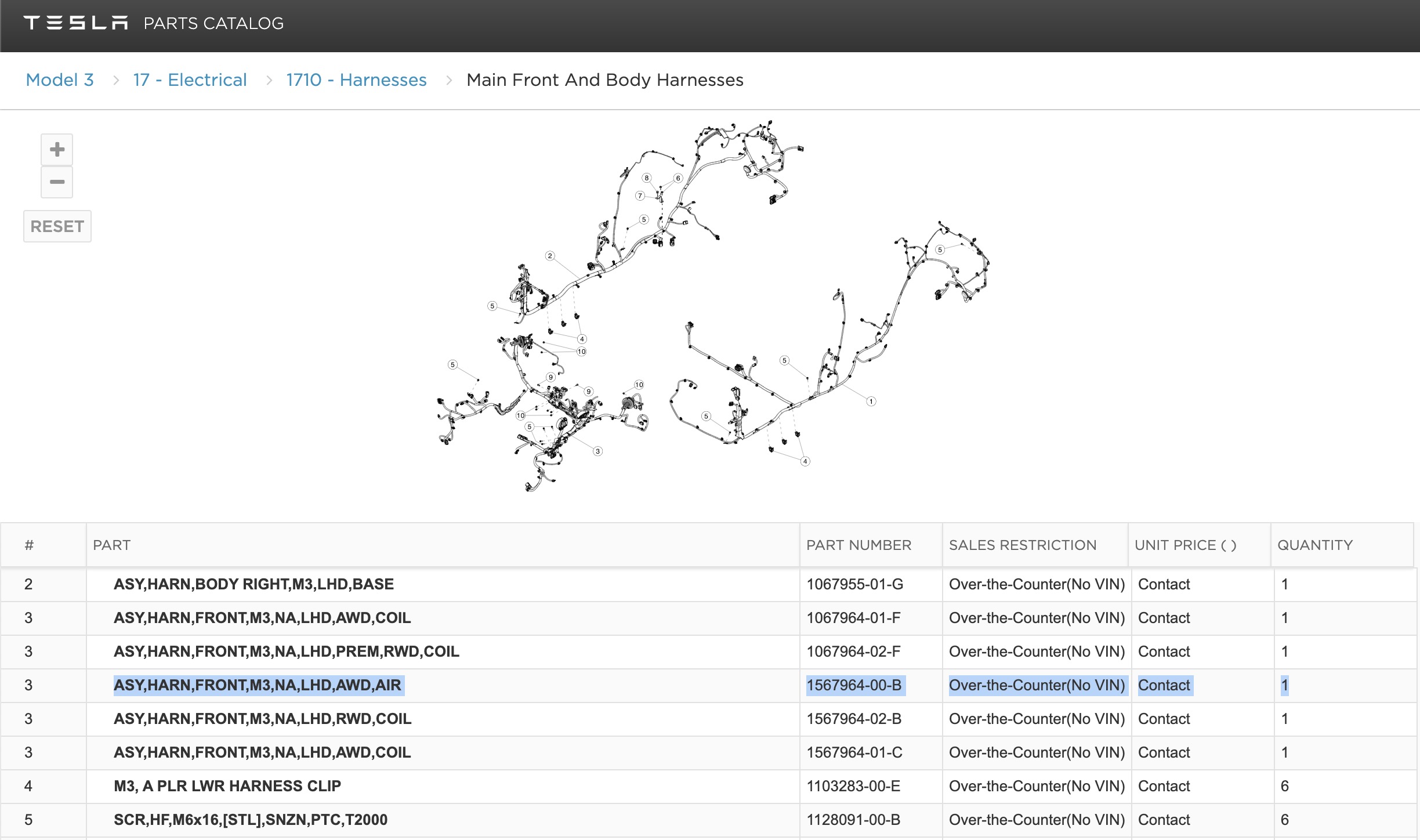 Hat tip to Electrek reader Joey Grondin from VE MTL who spotted the recent change in the parts catalog. It would mean that Tesla is adding parts to the Model 3 in order for it to be ready to take an air suspension.

Last month, a Tesla hacker known as Green revealed several new hardware updates hidden in Tesla’s code, including a new version of Tesla’s suspension, but not much was known about the upgraded version.

Now it sounds like it could be a new air suspension for the Model 3.

“We’ve also upgraded our air suspension system for Model S and Model X with fully-adaptive damping, giving it an ultra-cushioned feel when cruising on the highway or using Autopilot, and a responsive, exhilarating confidence during dynamic driving.”

The automaker added about the “fully-adaptive damping”:

This new suspension was introduced in the Model S and Model X back in April 2019 and no plan for a release in Model 3 was discussed at the time.

I love Tesla’s smart air suspension. I have it on my Model S and I used to live on a mile-long dirt road.

When I would arrive at the dirt road, the vehicle would automatically raise the suspension and give me more clearance on the dirt road. It was great.

Of course, it also lowers at higher speeds on the highway in order to increase aerodynamic performance, which increases efficiency and ultimately, range.

Those are all great upsides. As for downsides, the main one for an air suspension is that there are more failure points and it’s more expensive to repair.

With all the updates that Tesla made to its air suspension for Model S and Model X last year, it would make sense for the automaker to introduce it to the Model 3.

However, it would reduce the differentiations between the Model 3 and the higher-end Model S, but I don’t think Tesla is too worried about that with the Model S Plaid being around the corner.