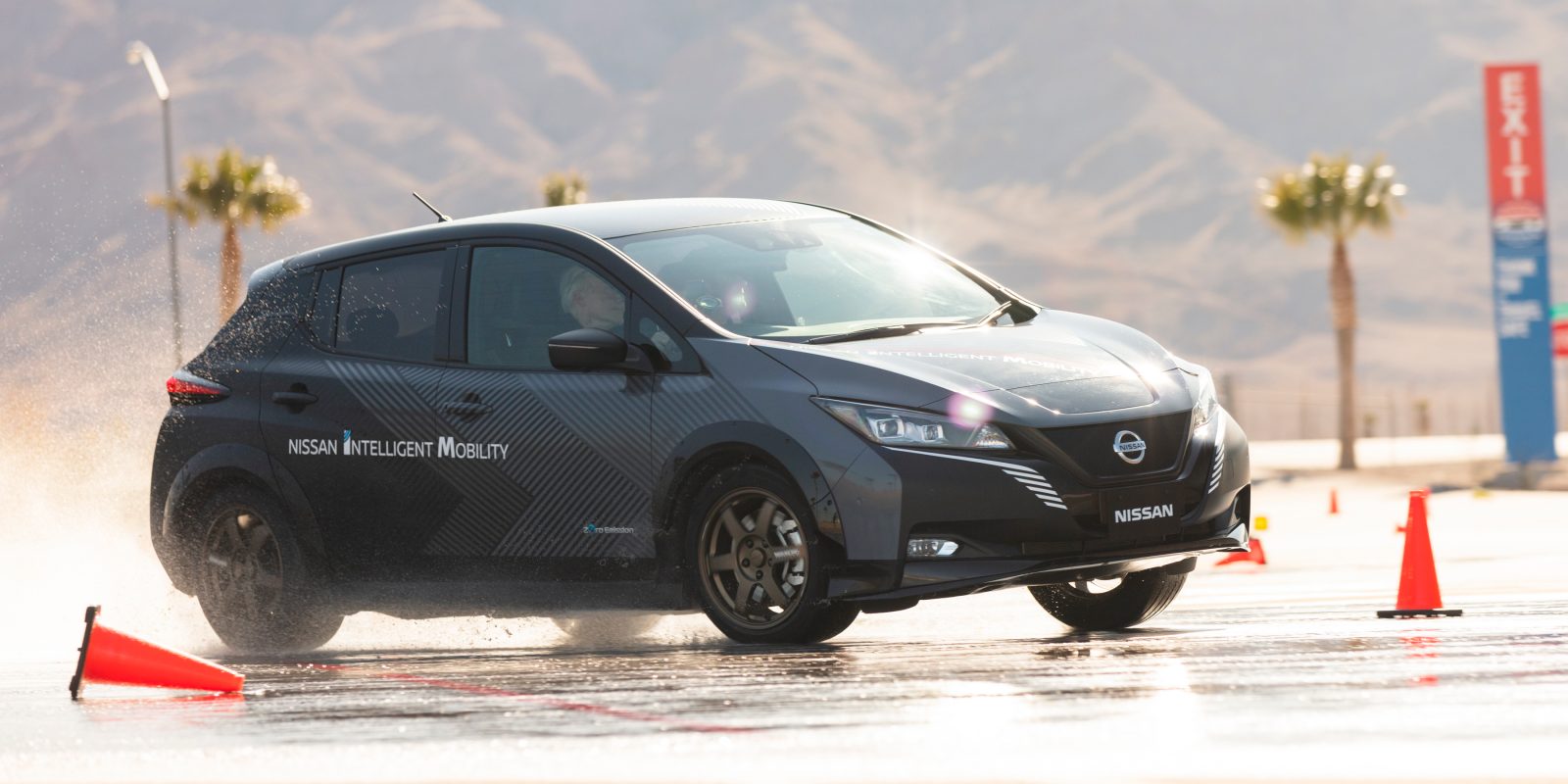 Nissan flew us out to Las Vegas during CES 2020 and put us up, allowing us to get a first-hand drive of the new e-4ORCE AWD technology going into their upcoming Ariya platform vehicles. We got to drive the new technology around the Las Vegas Motor Speedway – a place where exotic supercars are rented out the to wealthy with a backdrop of the Strip and F-35s flying overhead out of Nellis Air Force Base. It was quite the scene.

Nissan is cagey about what is exactly going on with the Ariya project, and it is still a concept “platform” at this point. But the company will note that it has door handles and a lot of finishing touches that most concepts don’t have. Beyond that, however, Nissan will commit to nothing, including this car ever coming to market. But I think it will and it could be pretty compelling based on the designs we’ve seen.

Ariya vehicles won’t be alone in the mid-range Crossover EV department at that point however. In addition to the Tesla Model Y, Ford’s Mustang Mach E will debut at about the same time and Hyundai/Kia Kona/Niro/Soul EV and Chevy’s Bolt/EUV will also be on the table. So it is entering a rare crowded EV space with some hardened contenders. How will Nissan differentiate its electric vehicle offerings?

One technology that Nissan will bring to the table with the Ariya is that it will have an AWD technology called “e-4ORCE.” That’s pronounced “e-force” not the phonetic “e-four-orce” or “e-four-horse.” The idea is that since you have electric power to all four wheels you can start doing things that help in performance, safety, and cornering by applying different forces to each wheel.

I wonder aloud if Nissan is thinking of making a Nissan LEAF Nismo with this technology in the mid-term? It would certainly help tide EV performance fans over until 2021.

Here’s a slide from Nissan’s presentation detailing the forces at work: 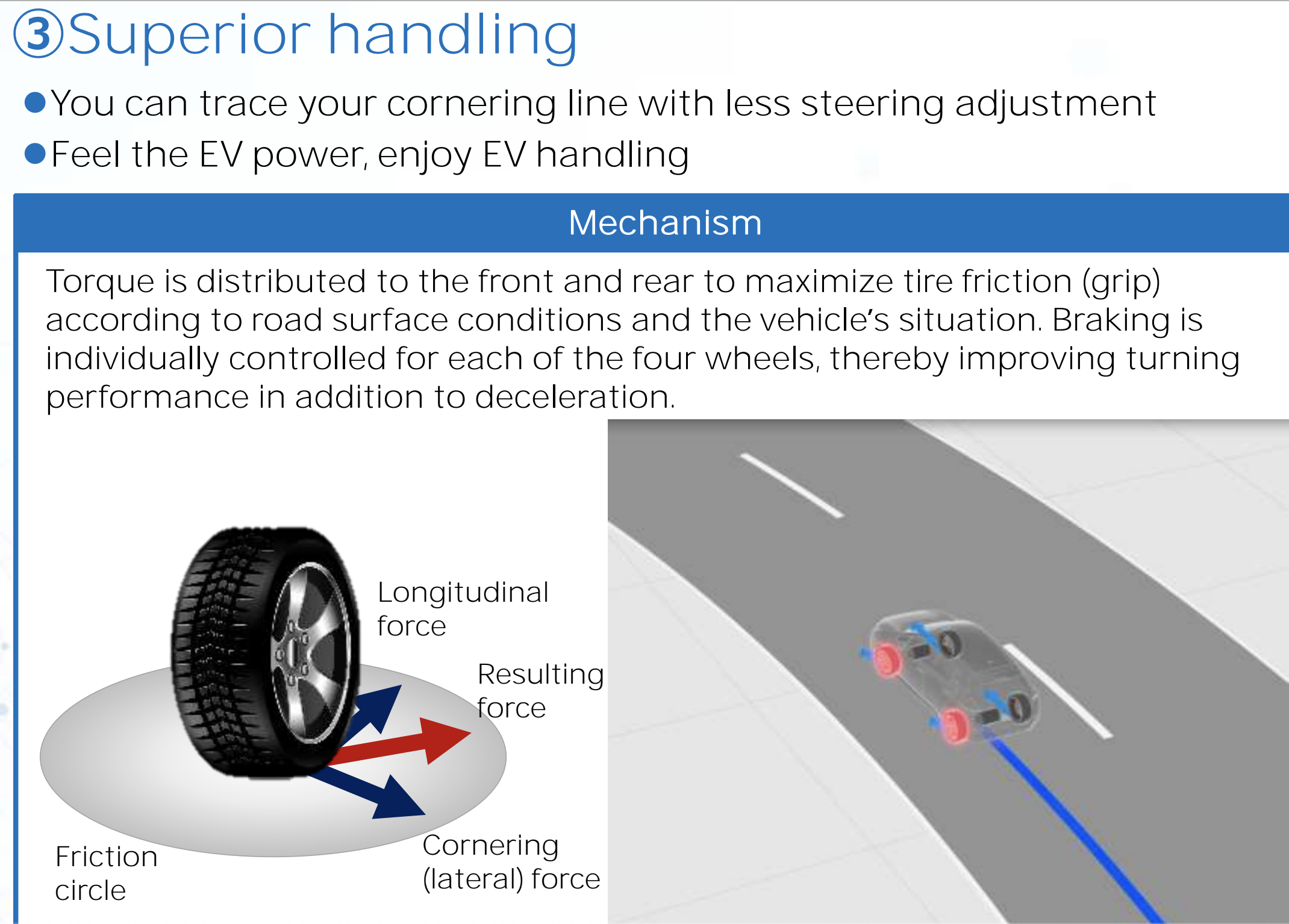 Another interesting application of AWD tech was Nissan’s moving the regeneration from the front wheels to the back wheels as more and more regen was applied. In a test, we tried slowing down with evenly distributed regenerated braking vs mostly rear regen braking and the difference was pretty obvious.

When the front brakes are doing a lot of braking the whole front of the car dips down and it feels like you are going over the top a little more. When the rear wheels absorb most of the braking the car stays flat while absorbing the same amount of speed. The experience is significantly better and something that can only be done when rear regeneration is strong.

After way too much lead-up, getting behind the wheel of the AWD Leaf Mule was super exciting. While it doesn’t have Ludicrous acceleration, the 304 horsepower and over 600nm of torque was unlike any Nissan I’d ever experienced. My instructions were to drive up to the turn at 30km/h and then floor the accelerator through the tight J-turn laid out in orange traffic cones…with water having been freshly applied to the track. With alligators.

OK, just kidding about the alligators.

Even in a slow ICE car, this would have been a recipe for disaster.

The e-4orce vehicle however seemed to apply some torque steering power to the outer wheels making the turn much more manageable. Or maybe that was braking to the inside wheels.

With my mediocre driving skills and inability to stay on the inside line of cones, I still managed to skid slightly. But it was manageable and it felt like the car was actually helping me out of the skid and through the turn. 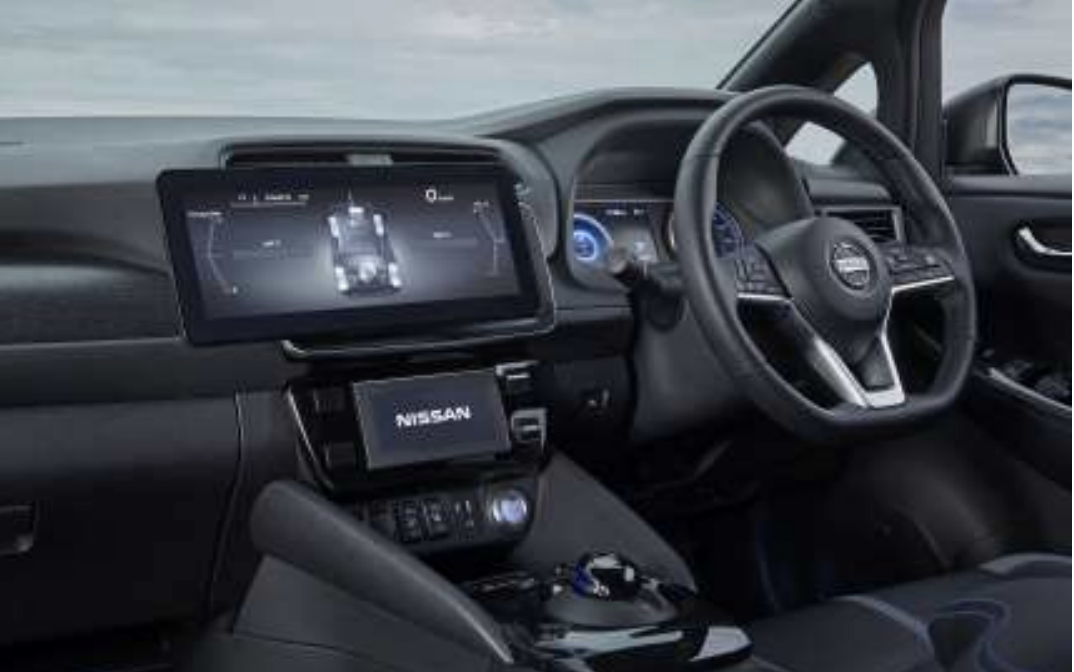 Then we turned off the E-4orce and did the same maneuver. It was night and day different, cones were destroyed and passengers saying their last rights. The car flung out from under me in the turn, seeming wildly out of control.

All of the difference was in that push of the button and enabling the e-4orce technology to help through the steering. To make the point clear, we did a final run with e-4orce re-enabled. I again went full speed into the J-turn and again, the hand of a deity helped us through the turn.

Will this be enough to sell vehicles? I’ll be honest here: I don’t know. Nissan’s LEAF model is now coming up on 10 years and compared to the rest of the industry and more specifically, Tesla, Nissan’s technology advancement has been awfully slow. Think about 2011. Tesla was selling the Roadster with almost none of its own internal technology. In the last decade, it has owned all of its EV technology, built 3-4 new models and also announced 3 more new EV models in an array of form factors. Nissan introduced the Leaf in 2011 has only updated the LEAF battery packs a few times and design once. Sure Japan/Europe got an NV200 van and we’re now looking at a 3rd generation Ariya prototype that comes from the iMX prototype. And yes, every iteration of these prototypes look a little less sexy than the last.

So what I’m saying is that Nissan really needs to step up its game if it wants to remain competitive in 2021 when this launches.  It isn’t 2011 anymore where it was the only real mass-market EV player in town.

I’m also not saying it is a lost cause. The design of the Ariya prototypes is still very good and they are pleasing to the eye. The e-4ORCE/regen technology is super helpful/refined and will give it more advantages over ICE vehicles. But after coming off of Mustang Mach E and Tesla Cyber Truck events at the LA Auto Show last month, driving an AWD LEAF isn’t going to top my EV wish list.