Get ready for more states to charge EV fees in 2020

Nearly half of US states impose fees on EV owners or will consider adding fees in 2020. The ill-conceived idea is to make up for gaps in roadway infrastructure investments usually derived from gasoline taxes. Expect these counter-productive fees to expand in the coming years as the EV market grows. Oregon and Utah are next.

Starting on Jan. 1, Oregonians driving an electric vehicle will pay $110 more per year to register their EVs. That will lift their registration fee to $306 for two years. The new Oregon scheme will calculate registration costs based on the miles per gallon of the vehicle. In other words, you get penalized for having a more fuel-efficient car. The increased registration fees were written into a transportation bill passed in 2017.

EV owners in Oregon have the option to instead track their travel and get charged 1.7 cents per mile.

That by-the-miler alternative is also available in Utah, where on Jan. 1, the state will start charging an extra registration fee of $90 to owners of electric vehicles and plug-in hybrids. The fee is expected to grow in the coming years. Proponents argue that the average annual state gas tax paid by owners of gas cars is about $187.

The root cause is stagnated fuel taxes, a misplaced priority on highway expansion, and broad improvements in vehicle efficiency. Not EVs.

As a new article by CalMatters makes clear, the shortfall in transportation funding is not caused by EVs, which still represent less than 1% of cars on the road. The root cause is stagnated fuel taxes, a misplaced priority on highway expansion, and broad improvements in vehicle efficiency. But that won’t stop state legislators from scapegoating EVs and thereby ask electric-vehicle owners to pay higher registration fees.

A recent Consumer Reports study showed that 26 states currently impose EV fees, with 11 charging more than the amount of owners of similar gas-powered cars pay in gas taxes. Three states charge more than twice the amount. This graphic from CR shows most, but not all, of the expected EV fees. 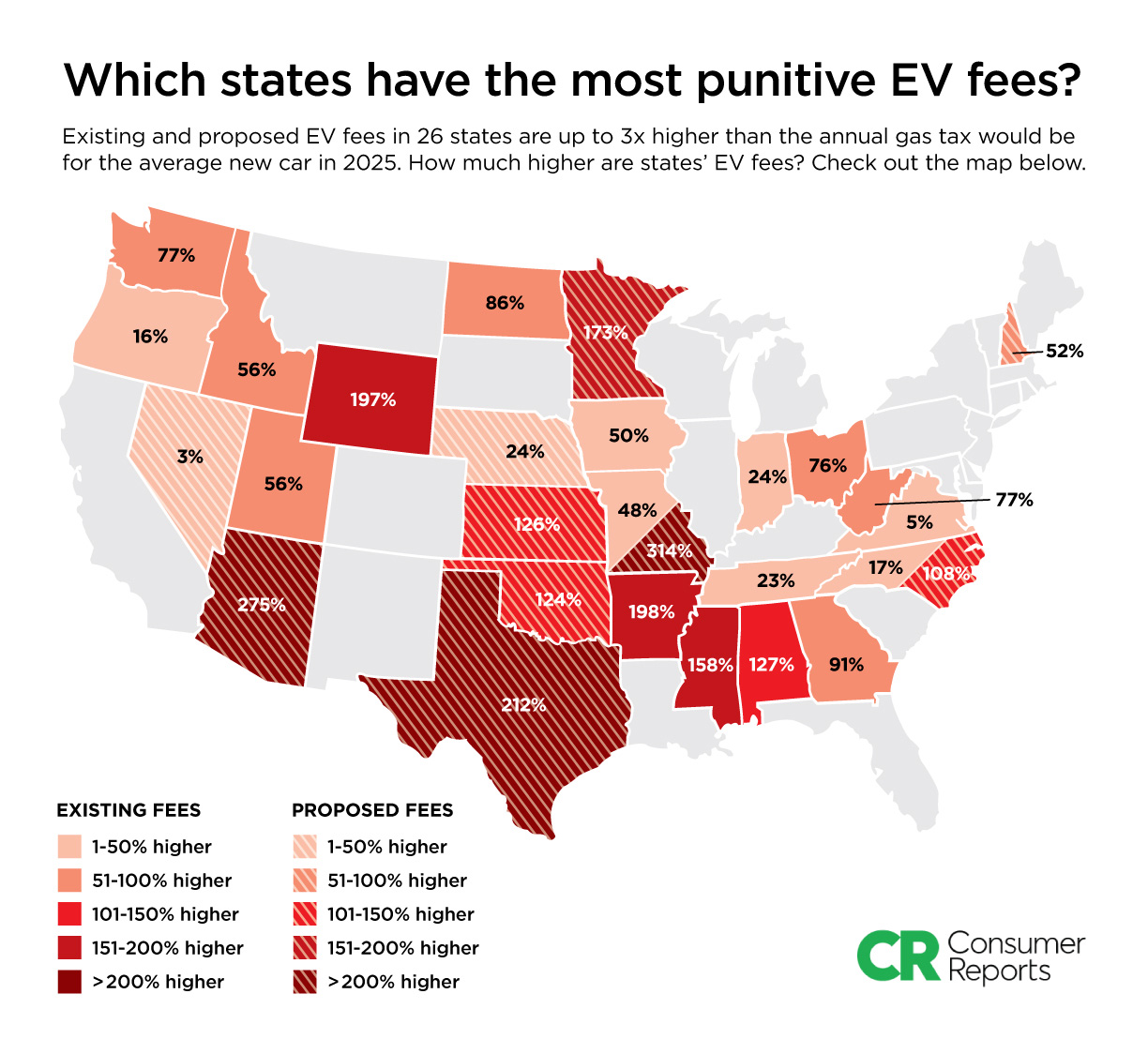 Minnesota and Missouri are two of the four states considering proposals to increase current EV fees. In those two states, the annual fee could triple in the coming years ­– from the current $75 fee.

The states considering new proposals for EV fees ­– many of which would result in taxes higher than what a driver of a gas car pays ­– includes Arizona, Hawaii, Kansas, Nevada, New Hampshire, New Mexico, Oklahoma, Pennsylvania, and Texas.

The New Jersey Senate Transportation Committee in November considered S.4090, a bill to design its own electric vehicle tax.

EV fees represent a misguided public policy that places a higher tax burden on the vehicles with low- or zero emissions. Why would we disincentivize vehicles that eliminate tailpipe emissions?

These fees make no sense in an era when EV sales are only beginning to take off. Plug-in electric vehicles today account for only about half-percent of cars on US roads. EV fees will not make up for shortages in roadway investments caused by other factors.

At the same time, UC Davis researchers found that imposing EV fees in California could reduce their sales by 10 – 24%.