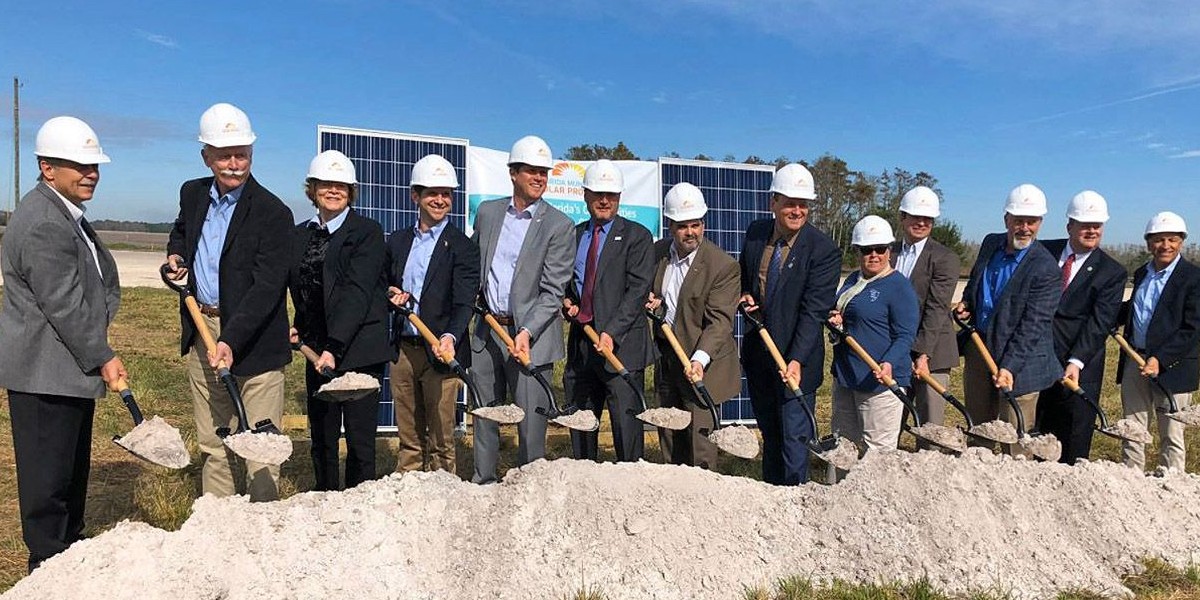 It’s being coordinated by The Florida Municipal Power Agency (FMPA), which is owned by 31 municipal electric utilities, is working with 12 of those local electric utilities, and Florida Renewable Partners, a subsidiary of Next Era Energy, the world’s largest generator of wind and solar energy.

The project will install around 900,000 solar panels in Osceola County and at one site in Orange County. According to the FMPA:

The total generating capability will be 223.5 megawatts of zero-emissions energy, which is enough to power 45,000 typical Florida homes.

The ground-mounted solar panels will be installed with a computer-controlled tracking system that moves the panel to track the sun as it travels from East to West, maximizing power output.

For perspective, according to Florida Census Data, there are around 6.3 million homes in the Sunshine State. FMPA and its 12 partners on this project serves 500,000 electric accounts.

Consumers don’t have to put panels on their home or incur installation costs. They can choose what percentage of power they want to come from solar and pay a small additional charge for that. (Yes, you read that right: Consumers have to pay more for opting for solar. As my bio states, I am a Florida resident, and I pay extra for renewable energy.)

Solar energy is Florida’s most abundant energy resource. Yet, according to the US Energy Information Administration:

Florida is the second-largest producer of electricity after Texas, and natural gas fueled about 70% of the Florida’s electricity net generation in 2018.

Florida is the fourth-largest energy-consuming state, and it uses almost eight times as much energy as it produces.

While the state has a lot of room for improvement, Florida’s environmental groups support FMPA’s step as another sign of progress.

In September, State Representative and Speaker-designate Chris Sprowls said, “We need to stop being afraid of using words like climate change and sea level rise.”

And Republican governor Ron DeSantis created the positions of chief science officer and chief resilience officer to take on the climate crisis earlier this year.

It’s always a good day when the utilities put more clean energy on the grid and provide more clean energy for all customers, because that’s where we need to go for a host of reasons: diversifying energy, helping to solve the climate crisis, environmental protection.

Solar is extraordinarily competitive, cost-wise. FMPA knows that these are the technologies that people want more of. FMPA is responding to that customer demand. This is a big step for utilities, but we need to keep it in context — it’s a first step.

It’s a small step. This project was mandated by the Florida Public Service Commission to have the utilities expand their use of solar power.

Florida has no energy plan, apart from buying the cheapest power we can get our hands on. It has to be a combination of energy. You don’t solely source your power from one source [natural gas]. Until policy changes in the state, we won’t become a leader in solar power. It needs bipartisan support, and time is running out, because we’re at ground zero for rising sea levels.