The electric vehicle should add to Audi’s growing EV lineup next year.

The German automaker unveiled the concept of the e-tron Sportback not long after the e-tron concept in 2017, and it always planned to release the vehicle soon after the electric SUV.

Now that deliveries of the e-tron are under way, it has unveiled the production version of the e-tron Sportback at the LA Auto Show.

As you can imagine, it is extremely similar to the e-tron SUV in terms of electric powertrain, but it is equipped with a coupé roof:

The Audi e-tron Sportback combines the power of a spacious SUV with the elegance of a four-door coupé and the progressive character of an electric car. It is 4,901 millimeters (16.1 feet) long, 1,935 millimeters (6.3 feet) wide, and 1,616 millimeters (5.3 feet) high. Its roof extends flat over the muscular body, dropping down steeply to the rear — in typical coupé style — and flowing into the steeply raked D-pillars. The lower edge of the third side window rises towards the rear — a typical Sportback feature.

Here are some images of the new e-tron Sportback released at the LA Auto Show:

Detail. The displayed vehicle shows optional equipment at extra charge. Individual equipment will be available at a later date.

Despite its more aggressive lines, the Sportspack retains some decent cargo space (58.4 cubic feet) and rear headroom, which is just 20 millimeters (0.8 inches) less than in the Audi e-tron.

Here are some pictures of the trunk and rear seat:

Like the regular e-tron, the Sportspack also features a small front trunk under the hood. It is big enough to hold the charging cable but not much more.

As for the powertrain, the Audi e-tron Sportspack is equipped with the same two options (50 or 55) as its e-tron SUV.

The Audi e-tron Sportspack 50 quattro, which is the base version, comes with a 71 kWh battery pack enabling a range of “up to 347 kilometers (215.6 miles) on a full charge in the WLTP cycle.”

That’s slightly more than the Audi e-tron 50, which is only available in Europe, due to better aerodynamic performance. 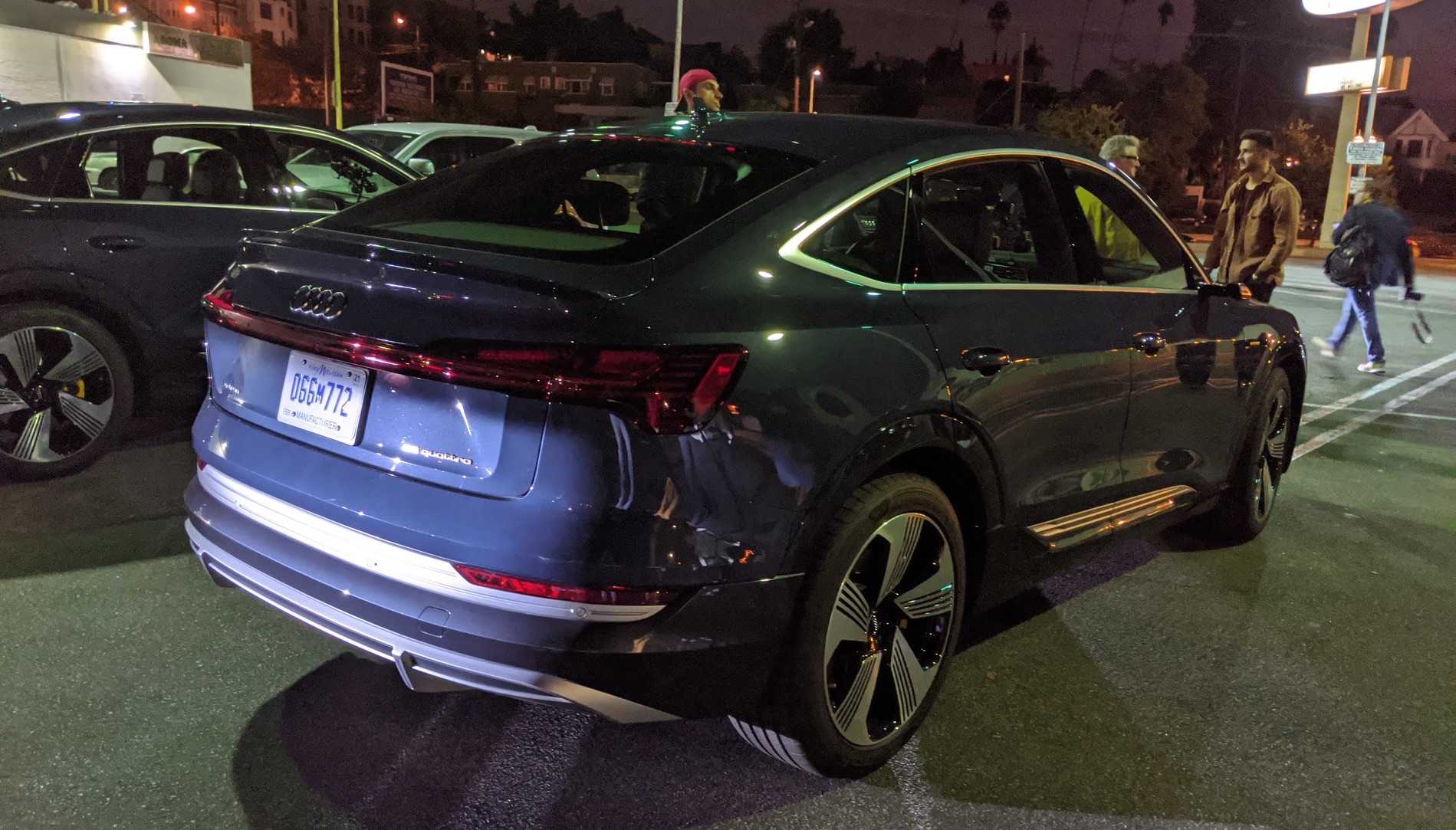 The Audi e-tron Sportspack 55 quattro is equipped with the same 95 kWh battery pack as the SUV, but it can achieve a range of “up to 446 kilometers (277.1 miles) on a single battery charge,” which is roughly 10 kilometers (6.2 miles) more than the e-tron — again thanks to better aerodynamic performance. Only the 55 will be coming to the US.

Again, that’s based on the WLTP standard. EPA range is expected to be closer to 210 miles of range.

Audi is also making its “digital matrix LED headlights” available on the e-tron Sportback where it is allowed by the regulations:

With the digital matrix LED headlights as top-of-the range equipment, Audi presents a worldwide first in a production vehicle: Broken down into minute pixels, their light can illuminate the road in high resolution. The design is based on a technology abbreviated as DMD (digital micromirror device) and is also used in many video projectors. At its heart is a small chip containing 1 million micromirrors, each of whose edge length measures just a few hundredths of a millimeter. With the help of electrostatic fields, each individual micromirror can be tilted up to 5,000 times per second. Depending on the setting, the LED light is either directed via the lenses onto the road or is absorbed in order to mask out areas of the light beam.

It is basically a grayscale projector in your headlights that can be used for a number of novel purposes. We got a look at the feature early yesterday morning.

Not only can it project to the front wall, it will also project to the road in front of the driver allowing for lane guidance and warning systems that make driving safer. Unfortunately it isn’t available in the US due to the same restrictions that also don’t allow the rear view mirror cameras.

Here’s Audi’s video about the feature:

Audi says that the new e-tron Sportspack is going into production at its CO2-neutral plant in Brussels in spring 2020.

At that time, the production is only going to be for the European market.