LA adds hundreds of EV chargers to streetlights, giving renters a place to plug in

The City of Los Angeles has installed EV charging stations directly attached to more than 130 streetlight poles. Hundreds more are planned. The streamlined solution to electric-car charging has been deployed in major European cities but not so much yet in America. But it makes total sense for a city like LA that has a large population of EV drivers, many who don’t have the ability to charge at home.

Mayor Eric Garcetti’s Green New Deal aims to have at least 100,000 new electric vehicles in the city by 2025. However, about two-thirds of Los Angeles households are renters, according to LAist.com.

“When the city decided that one of their priorities was to encourage the purchase of EV vehicles, it seemed prudent that it would be best to attach EV charging stations to our light poles,” said Norma Isahakian, director of the Los Angeles Bureau of Street Lighting.

She explained that a slim charger mounted to a light pole “eliminates another piece of equipment to be constructed into the sidewalk and utilize our circuitry.” 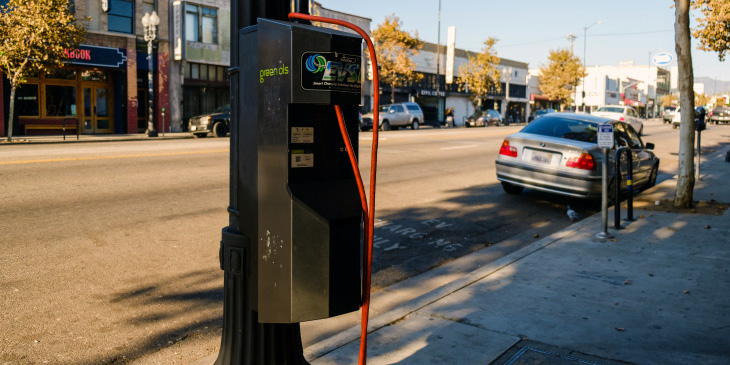 The city’s conversion of street lights to energy-efficient LEDs made the EV solution possible. The fee for charging is typically $1 to $2 per hour. Parking is free.

The stations are operated by charging network companies familiar to EV drivers, such as ChargePoint, EVGo, Flo, and GreenLots. The first light pole chargers were installed in 2016, but the effort intensified after LA launched its Green New Deal in May 2019.

In a new YouTube video about the curbside charging stations, Angelica Frias, smart city strategist for the city of LA, said:

“The bureau of street lighting is in charge of the operation and maintenance of the street lighting system of over 222,000 street lights throughout the city of Los Angeles. The inspiration for the curbside charging station was borne out of the city’s adoption of a sustainable plan, LA’s green new deal. To increase electric vehicle usage, the city needs to provide accessible charging to reduce range anxiety. Since LA installed LED fixtures citywide, we decided that instead of attaching an additional piece of equipment to attach the electric vehicle charger on our street lights.”

In the video, an EV driver named Ryan explains that he likes the solution because the charger is located on the block where he lives.

The Bureau of Street Lighting plans to add 150 more EV chargers to its street lights each year, with support of grants from the California Air Resources Board and California Energy Commission – as well as partnerships with EV charging networks like Flo.

Access to EV charging for apartment-dwellers is perhaps the single biggest remaining challenge to solve regarding electric cars.

California law provides a framework for tenants to request permission from their landlords to install electric vehicle charging stations. Landlords are required to approve a tenant’s written request. And starting January 1, 2020, CALGreen requires that new construction of multi-unit dwellings includes EV Capable infrastructure in at least 10% of parking spaces.

These are great steps. But if LA (and other major urban areas) are going to achieve EV-adoption goals, we’ll need entirely new approaches for providing EV charging in cities. The first couple of hundred pole-mounted chargers is an exciting move in the right direction.