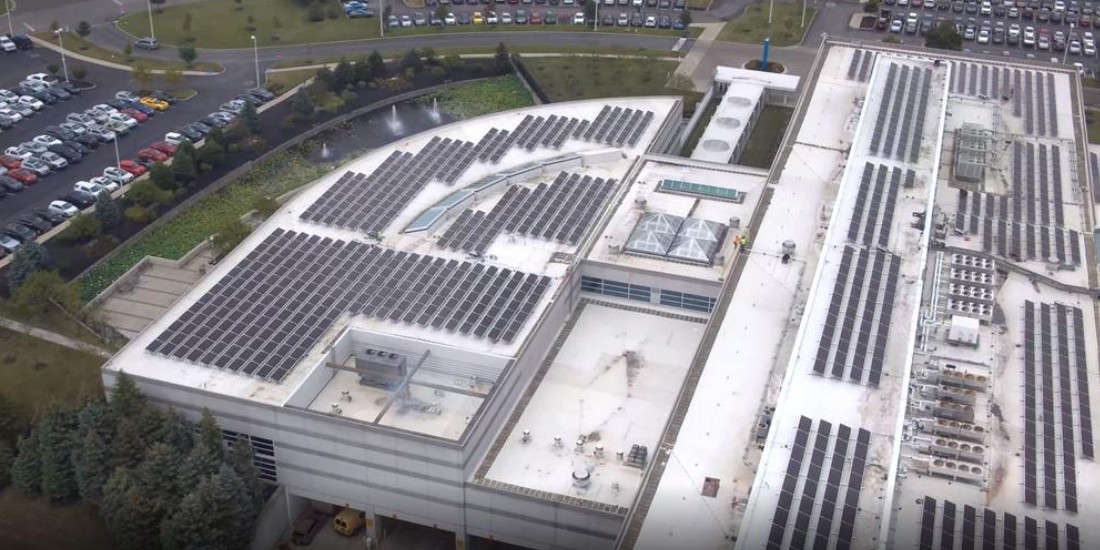 JPMorgan Chase has installed a 2.8 MW bifacial solar array on their roof at 1111 Polaris Parkway in Columbus, Ohio (pictured above). It’s the banking giant’s solar pilot.

Power can be produced from both sides of a bifacial module, increasing total energy generation. The panels are now producing around 18% of the building’s electricity.

The bank “believes the array is the largest commercial installation of bifacial solar modules in the world.” JPMorgan has committed to being 100% renewable by 2020.

We have big ambitions with on-site solar. Polaris is unique for us to pilot this, because it’s got a big rooftop area — almost the size of a football field — and we wanted to start here because there are unique benefits to that building.

Stockdale addressed the challenges of solar in certain markets at the KPMG Renewable Energy Financing Seminar in New York in 2018:

‘Sophisticated companies know how to do it, especially if they’re advised by a sophisticated partner,’ he said. ‘But some folks don’t, they get slammed, and then the benefit of the project goes out the window.’ For example, even in states like Ohio with tax exemption programs, covered parking structures doubling as solar carports are still heavily taxed, Stockdale said.

‘That kills my project. A state like Ohio does want the renewable capacity, but they have regulations that fight each other and make it hard to execute these types of large-scale projects.’

We’ll watch this space with great interest. JPMorgan will need to figure out how to make the other 82% of their energy sustainable in Columbus, not to mention all of the company’s properties. Hopefully, they’ll come up with a model other large companies can emulate.

But they might want to start with no longer lending to fossil-fuel companies. “The top four banks that invested most heavily in fossil fuel projects are all based in the US, and include JPMorgan Chase, Wells Fargo, Citi, and Bank of America,” according to Desmog blog in March.

By far, JPMorgan Chase is the biggest funder among the 33 banks assessed, putting $196 billion into fossil fuels from 2016 through 2018. Its money represents 10%.

CNBC moderated a panel on Monday at the Abu Dhabi International Petroleum Exhibition & Conference (ADIPEC) that consisted of heads of Big Oil and Big Gas. The CEOs defended their efforts to reduce carbon emissions and intimated that environmental groups pushing for a faster transition to green energy were being unrealistic.

I am alarmed when you hear things like extinction, crisis, emergency in some parts of the world.

And then you spend time in some parts of the world, like I have in India, Southeast Asia, there is a different type of emergency where villages don’t have access to electricity and pumps don’t produce clean water.

There’s just a lot of people, very well-meaning people, who want to believe that there is a simple solution.

The question is not to be emotional, I mean I am an engineer, but more rational and to find together solutions without antagonizing one against the other.

The whole world is calling for de-carbonization. But the fact of the matter is that energy is the lifeblood of modern civilization. And you don’t want to mess around with lifeblood.

Big Oil and Gas companies have got to think big picture, and concretely demonstrate that they are moving away from fossil fuels. And they can do it. Electrek just reported last week that Royal Dutch Shell is investing in renewable marine energy company EOLFI.

But Big Oil and Gas as a whole has to move faster, and they have to stop making excuses. They haven’t exactly eradicated poverty yet, have they? For a more in-depth take from Electrek on this panel’s comments, click here.

Who produces the most oil?

Thanks to the YouTuber “Data Guy,” here’s a video that illustrates who has produced the most oil from 1966 to 2018. He uses OPEC and the Energy Information Administration as sources. Data Guy points out:

The top five oil-producing nations are responsible for nearly half of the world’s production of crude oil, lease condensate, unfinished oils, refined products obtained from the processing of crude oil, and natural gas plant liquids.

On Sunday, Iran announced that is has discovered a new oil field with 53 billion barrels of reserves.

‘The promise and peril of EV infrastructure’

E&E News is running a multi-part web series on what they call “the promise and peril of EV infrastructure.”

On October 21, they ran a feature called, “Seattle Shows Why Curbside Charging Is So Hard.” The northwestern city wanted to put EV chargers on curbs (mainly for street parkers who live in apartments), which other cities had not done before. Read the article to learn about the unforeseen challenges that arose — and ultimately quashed — the plan. It’s a good case study for other cities to learn from as they move toward electrification.

And on November 8, E&E News published, “How Whole Foods Became Ground Zero in the Charging Wars.” Whole Foods installed its first EV chargers around 10 years ago, and introduced its first fast charger in 2013, in Fremont, California. “Now, 200 of Whole Foods’ 504 stores have slow chargers, and more than 50, mostly in California, have fast chargers.”

But while this is great for the convenience and promotion of EVs, not all is smooth sailing. EV drivers are competing with each other for the coveted chargers, and sometimes it can get a bit nasty, with traffic and conflict. Lots of EV drivers use the chargers yet don’t shop at Whole Foods. This is another great case study for how the EV charging industry is going to have to figure out how to meet the needs of rapidly growing numbers of EV drivers.

Thanks, E&E News, and we look forward to reading your next installment.